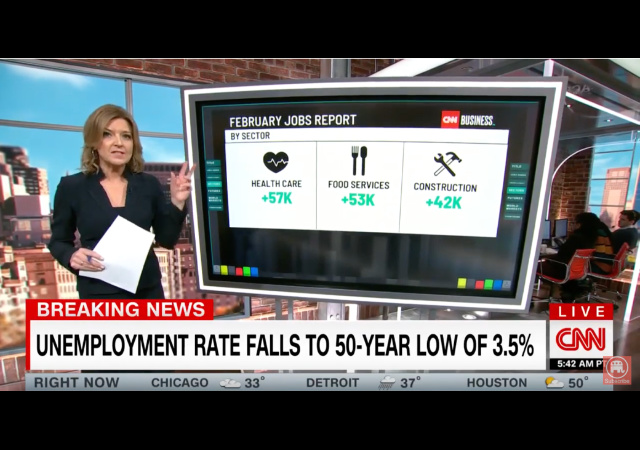 The economy has added jobs for 113 straight months.

The department also revised numbers from the previous two months. Instead of revising down the number went up 85,000 combined.

Government added 42,000 jobs, following a similar gain in January, and professional and technical services increased by 32,000.

Next month might hold different numbers. United Airlines will not hire people until the end of June. Hyatt Hotels stopped hiring in some places.

But the virus hasn’t stopped everyone:

“It’s still extremely difficult to hire,” she said. “With the unemployment rate as low as it is, there are fewer candidates who are available for the positions.”

Prediction – there will continue to be Coronavirus scares for the rest of March, disruptions in travel and the airlines (easy for people to cancel discretionary travel, which they are doing), and some supply chain disruptions from China.

After that, the Coronavirus scare will burn itself out and be yesterday’s news by summer. Any supply chain disruptions will actually lead to MORE growth and more jobs in the US, as manufacturing facilities are relocated back home.

We shifted WAY too much industry over to China. Bringing a lot of that home can only be good for us!

The dems and the media will do ANYTHING to to bring down our President. Including instilling fear about this virus 24/7.

notamemberofanyorganizedpolicital in reply to Yamamma. | March 6, 2020 at 1:59 pm

I just put $100K into stocks. Will deploy more cash in $100K chunks over the next few weeks. Only a fool thinks they can buy at the bottom. There’ll probably be more losses ahead, but I see a major opportunity here.

No one (at least not me) can call the markets with any precision, but the panic that started last week is going very much as I thought it would: Rally, then retesting of lows. I’m writing 20 minutes before the close, so we’ll see. Typically, the low (last Friday S&P bottomed intraday at 2856 and closed at 2954; today, last week’s intraday low was not pierced, but the closing low looks like it will be.

There are some major economic upsides in all of this. The 30-year fixed mortgage is soon going to hit 3%, and it will trigger a wave of refinancings. The result will be stimulative; when the same thing happened in early 1993, it was followed by a major economic boom.

Also, the failure of the OPEC meeting foreshadows oil at $25/bbl. The sector’s stocks have priced it in. Some oil companies are overleveraged, but not all of them, i.e. Chevron. On Main Street, we’re going to see a big drop in gas prices, which will also be stimulative.

Past that, the anti-ebola drug redesivir shows high promise, and I think we’ll be seeing further positive results soon. The randomized Chinese trials started in mid-Feb, and the U.S. trials are now underway. The only question is how quickly we find out; the U.S. trials will be complete by the end of April, but I’m figuring that we’re going to get preliminary reports sooner than that.

The test kits will be very widely available within about a week. The result will be more cases detected, but a whole lot more negative results and a plunge in the mortality rate. The media will do their best to focus on the numerator and ignore the denominator, but that won’t fly for long — especially if the therapeutic side turns out as I think it will.

BOTTOM LINE: More short-term panic ahead, but a quick reversal. I was far too pessimistic after the Panic of 2008, and am determined not to repeat that mistake.

Also on the somewhat positive side is that this caused the Federal Reserve to do what it should have done anyway: Cut the fed funds rate by 50 basis points, with probably another 25 to 50 basis points to come.

Trump had been arguing for this, and I supported him. It’s somewhat amusing to me that it took a COVID-19 panic for the Fed to do what it should have done anyway, but you take your good news where you can get it.

I’m going to wait until the market closes before posting this. Looks like the market re-tested the February 28th lows, both intraday and closing. This is classic panic dynamics; in other conversations, I’ve told people to watch for the re-test and buy into it.

No guarantees of course, but this is a positive sign. I’m going to be deploying more cash soon.

By the way, the above is not my blind faith talking, nor is it a political statement. In fact, I actively disdain individuals who deploy their money on political criteria. When I was a financial markets professional, I saw people who did that and got their asses handed to them.

My call is based on a combination of having been through a number of panics, and research on COVID-19 fundamentals. If I’m wrong, it will be the result of having been too optimistic on the therapeutics. If the anti-viral therapies don’t work, we’ll see much lower lows.

But there SHOULD be risks in any investment scenario. The scariest scenarios are those that appear risk-free. The best ones are those where the crowd ignored the positives, but an individual who did his homework saw what the crowd didn’t see.

We’ll find out, I think by the end of April, but maybe quite a bit sooner.