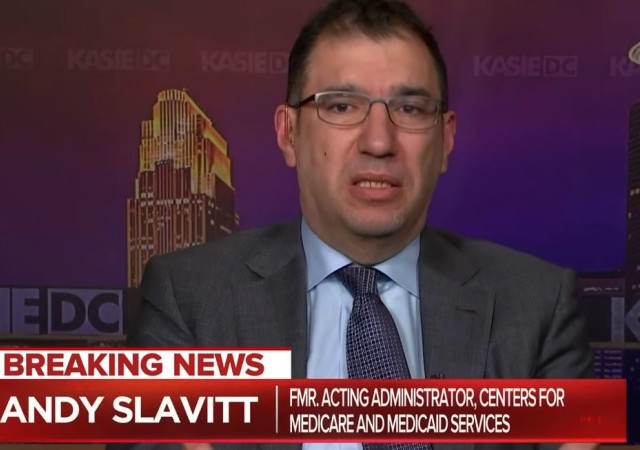 Andy Slavitt, the former Acting Administrator of the Centers for Medicare and Medicaid under President Obama, took to the Twitter machine on Thursday night with some very alarming news about a hospital in Michigan.

“A major hospital in the Midwest has reached its limit on ventilators minutes ago. They are handing out forms saying only those ‘with the best chance of survival’ will get care. Others will be getting pain medication,” Slavitt tweeted: 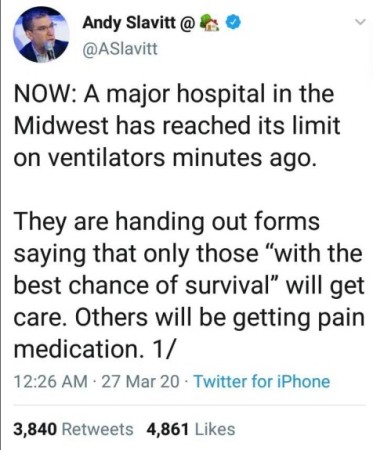 It was retweeted thousands of times.

Nicholas Bagley, a law professor at the University of Michigan, shared a similar message: 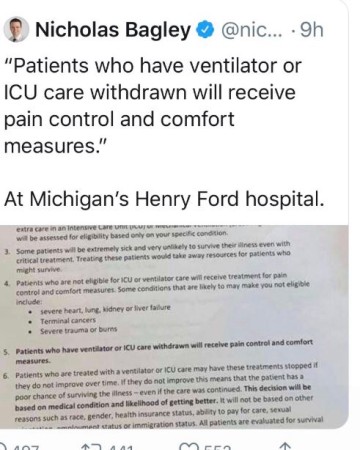 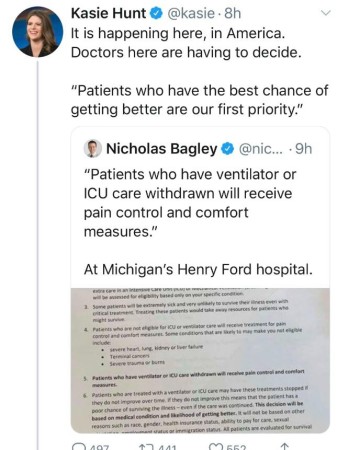 The problem with all of them sharing this information? It wasn’t true, according to the Henry Ford Hospital System in Michigan:

With a pandemic, we must be prepared for worst case. With collective wisdom from our industry, we crafted a policy to provide guidance for making difficult patient care decisions. We hope never to have to apply them. We will always utilize every resource to care for our patients.

Hi @GumboJesus, this policy was developed should we need to implement it. We have not needed it at this time.

Here’s what the policy, which was not “handed out” to patients nor family members, states:

A letter from the Henry Ford Health System in Detroit leaked detailing a policy to focus resources on COVID-19 patients "who have the best chance of getting better" & providing "comfort care" to those who don't.

On top of the fact that the policy isn’t active, the health care system confirmed in a statement that none of their hospitals were at capacity nor were they out of ventilators:

That letter was in preparation for a “worst case scenario,” but has not been enacted as policy, the Detroit-based five-hospital system said in a statement.

The hospital system has not reached capacity at any of its locations, nor has it reached the limit on ventilators at any of its hospitals, said Brenda Craig, vice president of the health system’s integrated communications.

“The letter is part of a larger internal document that unfortunately was shared publicly,” Craig said. “It would only be something used in a worst case scenario, and we are not in one right now at any of our hospitals.”

Imagine being a family member and reading Kasie Hunt’s tweet or some of the others that made this claim, and then finding out later that it wasn’t true?

Bagley deleted his tweet an hour or so after he put it up, and Slavitt deleted his sometime in the middle of the night and posted a multi-tweet thread Friday morning apologizing for what he did.

Along with many others, I inquired to Hunt about the need for her to delete her tweet:

Kasie, the tweet was deleted, and the hospital confirmed this policy was not in activation at this time. Are you going to continue spreading this fake news in the middle of the pandemic or be responsible and not? https://t.co/ddOQelN7ec

Several hours after she initially put the tweet up without independently verifying the claim, she deleted it:

I took down this tweet after the person who posted it deleted it. I’m including what the hospital had to say about it here also. pic.twitter.com/TG9GoPnzB7

We can add these tweets to the growing list of appalling “reporting” about the situation on the ground in different parts of the country on the Wuhan Coronavirus outbreak. Earlier this week, Democrats and the MSM tried to make people think Trump and other Republicans wanted to get the economy going again ASAP even if they had to sacrifice senior citizens to do it. Now they’re trying to make people believe hospitals in the U.S. are rationing care, like Italy has had to do.

I’d call what they’re doing highly irresponsible in the extreme, but that doesn’t even begin to cover the extent of the needless panic they’ve spread by running with reports that aren’t true, some of which they have walked back well after the fact.

Quite frankly, Hunt should be suspended over what she did, but it’s not going to happen. Why? Because false narratives and “getting Trump” are the order of the day with the MSM, even if it comes at the expense of scaring people at a time when their fears are running high.

Wih the theaters closed, anybody who wants to shout “FIRE!” has to do it on Twitter instead.

This clown’s a fear monger plain and simple

The hospital noted, in their doomsday scenario message, regular policies that are in effect at most hospitals I’ve worked at since the beginning of time.

Duh! If you have terminal cancer, severe heart, lung, liver or kidney failure or irreparable trauma the ICU attending physician may decide not to admit you. If you’ve signed a DNR (do not resuscitate) order and you are at death’s door with Coronavirus, the doctors will honor your request to not have invasive care.

Now, as we see in all major hospitals, families might agree and support the plan. Others might have their loved one transferred to another institution to try and reverse the inevitable. Clearly, fear-mongering lefties who both hate the President and have never set foot in an ICU delight at seeing this memo. She must not have anyone in her family who is a physician either. So much disinformation from these ignorant people, it’s no surprise very few trust them.

Hey Twitter, where’s your fake news algorithm when we need it? Bah!

The Chi-Coms would know how to deal with those spreading false information. (Did I just say that?

I hear what y’all are saying, but here’s an article in the Detroit Free Press about a nurse who was asked to work on her day off in a different hospital, about them running out of ventilators.

If in Michigan they are running out, Cuomo of New York or the Feds, should be sending them ventilators.

If the Gov. or the hospitals are NOT asking for supplies, that is very very VERY dishonorable inaction and omission, because there are some available all over the country and Americans HELP each other.

So I would like to know the true facts. As far as I’m aware this nurse has not political axe to grind.

She states at the hospital ER she worked at which was not her usual place of employment, they ran out of ventilators, fentanyl (sp??), propopol (sp?) which they use when they intubate & ventilate, TYLENOL, face masks are being used for “an entire year” and are kept in a paper bag for storage. She says there are no gowns and they are running low on gloves.

A hot spot indeed. So where are the Michigan authorities and hospital CEOs working for their staffs to get what is needed? Where are they and WHO are they???

It’s Michigan and Detroit. The Michigan Governor would rather fight than work with Trump. She has been so rude that Trump instructed Pence not to speak to her. He call her Governor Half-Whitmer . See Trump fires back after Dem governor complains about federal response to coronavirus

I love Michigan, one of the reasons we are doing such a GREAT job for them during this horrible Pandemic. Yet your Governor, Gretchen “Half” Whitmer is way in over her head, she doesn’t have a clue. Likes blaming everyone for her own ineptitude! #MAGA

Exactly. The Michigan governor’s conduct is unacceptable. HOWEVER that doesn’t let off the hook the hospital officers, who should be contacting V.P. Pence if they have to, to get adequate supplies.

the supplies are out there, but getting them to the hot spot is the harder part.

And after all her bs aimed at PDJT not doing anything she had to walk it back. Not only did a bunch of supplies show up but it turned out she was going to the wrong place for the supplies or something along those lines.
She’s really ugly and aiming to be quid pro slo joe’s veep. If she’s offered that slot she should be made to resign as governor.

My first reaction was “who is kasie hunt and why should i give an f what she says”. Looked her up. Still could careless what she says.

The problem with interviewing a random nurse or doc is that their respective is merely what is in front of them. They can’t see the whole hospital let alone the entire hospital system or state.

A nurse in the ER sees that ER. Each hospital that I”m aware of has ONE ER.

So if that ER is out of ventilators, then she knows enough to let us know there’s a very, very, very serious problem.

Cuomo on the other hand, has admitted he has ventilators he isn’t using which the Fed. govt. gave to NY.

Those should be shipped to the hospital in question. Detroiters should not die so Cuomo can be supply-wealthy.

My experience is that patients on ventilators aren’t in the ER as much as likely in the ICU. When I was last in an ICU (largely because the hospital was full) it was a full seven floors and in a different building than the ER.

People tend to look at their local surroundings and extrapolate that into the world as a whole. Unfortunately the media (which should be educated to know better) now tend to forget this when it is convenient for their story.

Okay, I wasn’t referring to Kasie Hunt in the post, but rather this lady who works in ERs in Detroit as I understand her:

Sorry, I’m not referring to Kasie Hunt, but MaryMac019 on INstagram.

Mary is the ER nurse I referenced above with the link.

Henry Ford Hospital in Detroit. Nothing more needs to be said. Nothing.

I’m unfamiliar with hospitals in Detroit. What is the backstory on Henry Ford Hospital?

If it’s bad, I feel for Henry Ford because he was a genius and very, very productive for Americans.

Were I PDJT, I’d call this clown out at the next press conference, but not call him Cutie Pie. I’d call hom Tokyo Rose.

Fox fired Trish Regan this week, Kasie should also get the pink slip

But won’t. Not for this. He’s putting eyes on screens. That’s all that counts.

I posted a link yesterday in the media extinction article about the Seattle Times hit piece on Trump/GM/Ventilators.

The article which was highly critical of Trump, used anonymous sources for all negative stuff and then all legit named sources said Seattle hospitals (a epicenter) are not low and estimate the increase to be in the hundreds.

They love pressing that panic and rage button. The market is ripe for legit reporting- people have had enough of this. Most local stuff of crime and whatnot is coming from FB groups watching police scanners etc and attending city council meetings as we know we won’t get honest reporting from the times.

KOMO won a huge following with Seattle is dying, but they don’t do that for most of their stuff.

Odd that the phrase ‘former Obama administration official’ is not used in front of the people who are making the panic calls when it is quite applicable.

Three phases of this modern pandemic reporting.
1. Former Obama administration official reports something wild and off the wall that implies upcoming doom.
2. Media repeats the false claim with a megaphone worldwide.
3. Truth comes out, the original claim is either vanished or just ignored, and any corrected news stories show up on page 37 next to the classified ads.
(Repeat ad infinitum)

“Minutes ago”
How did you have this information this quickly, you liar?