“That is really unfortunate. I would wish that that would stop. … there are not differences. The president has listened to what I have said…” 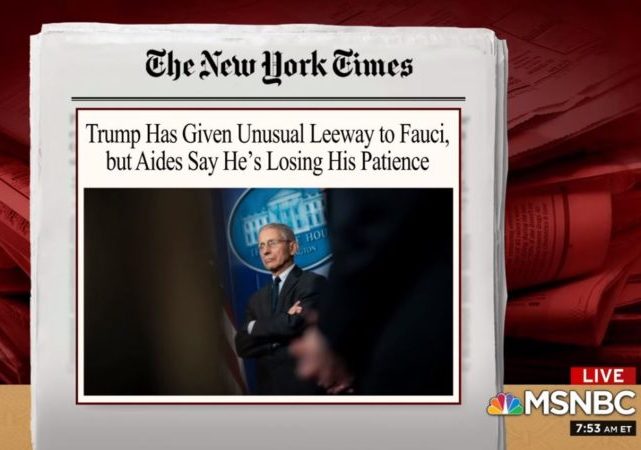 The anti-Trump mainstream media is trying to portray Dr. Anthony Fauci as in some sort of conflict with Trump, with Trump as the villain.

The New York Times wrote, Trump Has Given Unusual Leeway to Fauci, but Aides Say He’s Losing His Patience

But Dr. Fauci, the director of the National Institute of Allergy and Infectious Diseases since 1984, has grown bolder in correcting the president’s falsehoods and overly rosy statements about the spread of the coronavirus in the past two weeks — and he has become a hero to the president’s critics because of it. And now, Mr. Trump’s patience has started to wear thin.

So has the patience of some White House advisers, who see Dr. Fauci as taking shots at the president in some of his interviews with print reporters while offering extensive praise for Mr. Trump in television interviews with conservative hosts.

The president’s latest stabs at a show of unity with Fauci come after a series of interviews, news reports and at least one conspicuous absence have hinted at heightened frustration with the career public health official. Fauci, who has led the National Institute of Allergy and Infectious Diseases for 3½ decades, has become one of the most widely recognized and respected faces of the federal government’s response to the novel coronavirus.

It’s all the media being malicious.

Fauci appeared in an interview with WMAL and put the lie to that conflict story, and criticized the media for pushing it.

Here is the audio of the full interview:

Here are some highlights tweeted by WMAL host Vince Congalese (the discussion of conflict with Trump starts at 6:00 in the audio).

DR. FAUCI: “No, I don’t consider the balancing act… the president has the awesome responsibility of considering every aspect of this. I just give public health advice completely clean, unconnected with anything else. He has to factor in other things.”

FAUCI: “…under very intense discussion. What the president is trying to do is balance the public health issues with the fact this is having an enormous impact on the economy of the country which may actually, indirectly, cause an incredible amount of harm… even health wise.”

DR. FAUCI says media is trying to “pit” him against
@realDonaldTrump
.

“That is really unfortunate. I would wish that that would stop. … there are not differences. The president has listened to what I have said…

The idea of pitting one against the other is just not helpful.”

FAUCI: Coronaviruses typically “do not fare as well in the warm, moist weather as opposed to the cold, dry weather.”

“We don’t know. […] wonderful if it happened, but we don’t know whether we’re going to see that as we get into the warmer weather of May, June, July.”

Nothing new, most of the media has thrived on playing up so called division via unnamed sources in the administration.

I watch the live news conference, then I see the articles written the next day. Totally different stories.
It’s a disgrace.

They also offer quotes that do not quote (e.g. close assocations a la NYT style guide), through mutation, selective splicing, and spontaneous conception, in order to construct novel news.

THEY JUST FLAT OUT LIE ABOUT ALL!!!!!

People who have first-hand knowledge or involvement in the events covered by the media have known for years that the media almost never gets it right.

Why expect them to change now, especially when there’s a President they want to take down?

Fauci said. “There really, fundamentally at the core when you look at things, there are not differences. The president has listened to what I have said and what the other people on the task force have said. When I’ve made recommendations, he has taken them. He has never countered or overridden me. The idea of pitting one against the other is just not helpful. I wish that would stop and we’d look ahead at the challenge we have to pull together to get over this thing.”

More than 12 trimesters and the resistence is persistent… The press, media, and social platforms are spreading a social contagion that competes with the viral pathogens.

isn’t time to abort the resistance

The UN and China are all aboard with Democrats in this divide and conquer strategy, each with their own motive and profitable cow.

At least we know for sure who our enemies are by name.

another anonymous source, is other words it means nothing.

one more thing the democrats might just want to compromise quickly or they are going to loose the ‘crisis’, and they will still look like the creeps they are.

In regards to the Chinese, I believe the only way the American public could really hurt them, is to not buy their products. Maybe a good hash tag campaign can be #PutItBackOnTheShelf. Tell merchants on no one certain terms the goods made in China will not be purchased.

We may have to do without that new toaster or food blender for a while, but retailers will get the message. They will tell their suppliers. Things will change.

notamemberofanyorganizedpolicital in reply to The Friendly Grizzly. | March 24, 2020 at 2:59 pm

I like canned smoked oysters, but for years now the only ones in the grocery stores are those “MADE in China.”

So it’s been NO smoked oysters for me for years now.

doing my best to stay away from anything made in China, one of the things that really really irks me, is to travel somewhere and try to by souvenirs and find out they are made in china.

Business is forced to buy from China because they are by far the lowest cost for materials. As a manufacturer you have to source your products as cheaply as your competitors otherwise your competition can undercut your prices and put you out of business. The government sets the trade rules. High cost of materials is not a problem as long as your competition has to pay the same high prices. We don’t need access to cheap Chinese materials we just need a level playing field with our competition. The government needs to put up trade barriers with China to prevent their monopolistic behaviors.

Having a cheap product is all well and good. But, when enough consumers say “no!”, things have to change.

notamemberofanyorganizedpolicital in reply to The Friendly Grizzly. | March 24, 2020 at 4:52 pm

People need to understand that cheaper products often need to be replaced sooner than the more expensive alternatives, so they end up paying more over the long run.

Don’t be like the high time-preference losers the Dems cater to. Be a wise conservative and buy things that last — which often means avoiding crap made in China.

I’m thinking The Good Doctor was expecting everyone to “believe the doctor” right up until those pesky and troublesome “I love you” political notes to Hillary showed up. Now, he had either be part of the solution or we will ALL consider him part of the problem.

He cooked his own goose.