The markets don’t seem too concerned though 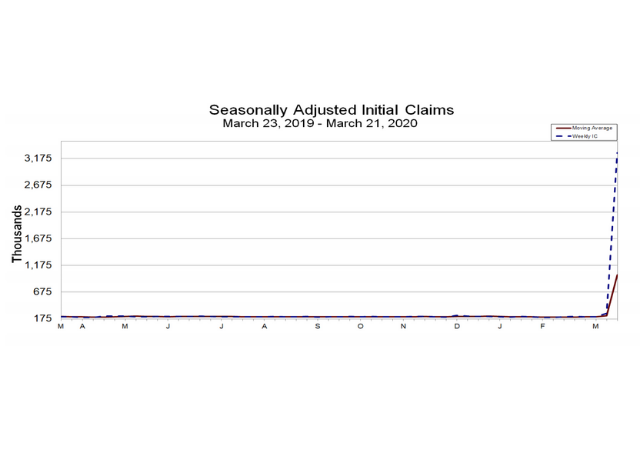 And this is only the beginning.

The seasonally adjusted increase in initial jobless claims from March 15 to March 21 was the largest ever, easily crushing the previous record rise of 695,000 in October 1982. The tally in the prior week was 282,000.

The sudden surge in claims is likely just the beginning. Waves of fresh layoffs are expected with many states ordering nonessential businesses to close.

Wall Street was bracing for a terrible number. Economists polled by MarketWatch had forecast a 2.5 million increase. Just a few weeks ago, new clams hovered near a 50-year low.

The flood of Americans applying for unemployment benefits was heaviest in states suffering the most from the coronavirus, but they soared everywhere. The biggest increase was in Pennsylvania, followed by Ohio, New Jersey, Massachusetts and California.

The extent of the layoffs, if anything, was understated by the latest claims report.

Many Americans were unable to file claims because some state computer systems got overloaded. And some workers classified as independent contractors, such as Uber drivers, weren’t eligible to apply for benefits, though the new congressional bailout package will soon offer some a chance to collect unemployment checks.

The markets don’t appear too concerned about the spike in unemployment, likely because the Senate unanimously passed an economic stimulus relief package late last night.

Stocks rose for the third straight day on Thursday, as investors looked past a startling rise in applications for unemployment benefits and bid up the shares of companies set to receive support from the $2 trillion coronavirus aid bill recently approved by the Senate.

The S&P 500 was up more than 4 percent, while the Dow Jones industrial average rose even further, lifted by a 15-percent surge in Boeing’s share price.

Stocks have been rallying since Tuesday, when the S&P 500 had its best day since October 2008 with a 9.4 percent climb, as investors anticipated Washington’s support for a number of industries.

Earlier in the week, Trump indicated he hoped to have the country back up and running by Easter, which seems overly ambitious. That said, I’d be willing to bet that he knows mid-April is a stretch, but the public (and the markets) need to know that someone is looking ahead to an end of the shutdown. It’s better to say mid-April and then extend that by two weeks than to say 5 weeks, which seems like an eternity at this juncture.

Markets have this number already priced in. Guessing next month will double.

notamemberofanyorganizedpolicital in reply to Whitewall. | March 27, 2020 at 5:42 pm

Plus the Insiders/Market know this is ALL FAKE!

notamemberofanyorganizedpolicital in reply to dmacleo. | March 27, 2020 at 5:46 pm

This lock down crap is costing people their jobs, which also means their poor healthcare insurance with the absurd deductibles thanks to Obamacare, will also be gone. So, no treatment will be sought as families have to eat, and unemployment will not cover most expenses.

This is exactly what Trump was talking about the “cure” being worse than the disease. Given the mortality rates as they are being published are low, but the loss of jobs will impact and harm more families for decades to come.

The longer our fascist governments dictate these shut downs, the worse it will be, and the longer recovering from this will take. And the panic is based on poor data, as well as based on being pushed to destroy the economy so Trump will lose the election. This is scorched earth policy taking shape here.

At some point no job will be safe, other than the politicians’.

This entire thing is “DEM-FAKE OUT!”

Have you seen this latest crime?

Here is the problem with this shutdown.

First, it targeted restaurants and the entertainment industry. These two industries comprise nearly 1/9th of the US economy. They employ a staggering number of people. And, the restaurant industry is heavily weighted to small businesses. These Mom & Pop and family enterprises operate on a very slim profit margin. So, if the economy gets reopened on Easter, a significant portion of these business will not reopen. and, as it will take weeks, if not months, for the general economy to recover sufficiently so that moat workers have the disposable income to patronize these establishments, a significant number of those, which do reopen, will also fail by the end of the year. The panic reaction to the COVID scam has probably changed the landscape of these two industries forever. What people do not realize is that these business will likely get a low interest loan to help with their recovery. But, the reduction in income due to reduced patronage as well as the other costs of doing business, including other loans taken out to expand the business, as the economy expanded over the last three years, will destroy these businesses. So, high unemployment figures will remain. Public worker benefits will begin to run out by July. And, we are back in an Obama Era recession, if not worse. Possibly for years.

Who caused this? The news media. They lit the fire of panic and they are still fanning those flames today. Then we have the liberal politicians who care only for the removal of President Trump at any cost, even the death of millions of their fellow citizens. What are those responsible going pay for these heinous crimes? And, who is going to collect? And, when?

moment of all the remaining DEM voter’s lives.

What’s really surprising is how blue state governors are shutting down everything they can.
Rarely in the annals of democrat history have they lost the chance to steal taxpayer dollars as quickly as they can.
Their lockdown order have to be costing them a bunch of stolen taxpayer dollars.
Pretty sure within the next two weeks they’ll be clamoring for their businesses to open up when the ones that bribe the governors come hat in hand and plead bribery poverty and maybe next month they can pay them off.

Remember it was the Democrat Party Controlled* School (College too) Administrations that STARTED THIS EVIL.

They Own that EVIL.

Personal story. I was able to save a good bit of money during my military career. This was made much easier due to a bit over 4.5 years deployed to Iraq with a side tour of 7 months to Kosovo and of course the cumulative total is around 18 months in training exercises prior to those deployments. Not a whole lot of choices to expend funds and military service includes ‘3 hots and a cot’.

With that preface, I was able to finance the purchase of several vacation style homes in a small resort mountain community. They are offered for short term rental and have just about broken even on a cash flow basis, while with minor expenditure for repairs have appreciated significantly in value. All that is to the good.

The problem now of course is the over reacting to the local conditions regarding covid-19. The village where the homes are located has taken out public advertising telling potential visitors/renters to stay away. This is on top of Airbnb unilaterally modifying their terms and automatically refunding booked units, no questions asked, from March 14 thru April 14.

Obviously this is having a considerable impact on revenue. In fact I now have zero bookings for the reminder of March, none in April and none in May until Memorial Day. So that is a considerable financial hit for me. Not much I can really do about it. Nor do I expect the government to anything for me either so long as the government doesn’t provide funds to my larger competitors then let the market sort it out. However, those similarly situated to me, who outsource all the associated activity of ownership are not, as far as I can tell eligible for SBA assistance because we are not within the traditional parameters of a small business.

Hopefully, in the aftermath, we can review this kind of bureaucratic holdover as well as changing unemployment compensation payment and contribution requirements for those in the ‘gig’ economy. There are far more folks with a significant amount of income from entrepreneurial/self employment activities than is widely known.

I just watched a MSM show that covered how this epidemic is damaging the economy. It was amazing how they spun everything against Trump in both directions at the same time.

They implied that it was all Trump’s fault that so many people were laid off and the economy is in trouble. They made it clear that they want people to think that Trump caused all of this, cleverly forgetting how they cried “Racist!” when Trump cut off airline flights and visitors from China.

Then, they played the edited tape of Trump saying he’d like to re-start the economy as soon as possible. They came right out and said that Trump just wants to do that to get re-elected, and he doesn’t care how many people die because of it.

I’m sure the MSM have stopped calling it the “Chinese flu” or the “Wuhan virus” because they are trying to get people to think of it as the “Trump flu.” You would have to be a moron not to recognize their bias against Trump.

Do they even listen to themselves?