Branco Cartoon – The Young and The Restless

Branco Cartoon – The Young and The Restless 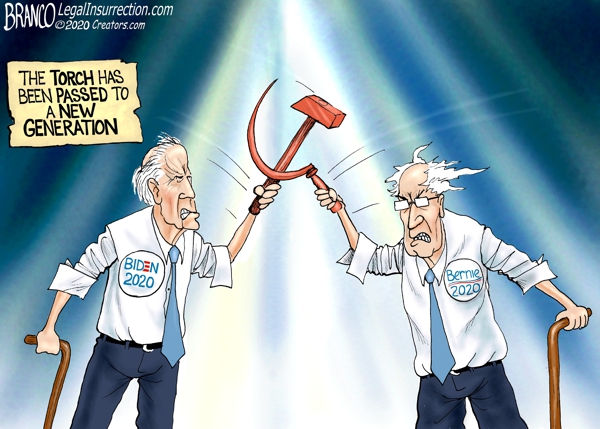 “For all those whose cares have been our [D] concern [so that they remain in the permanent underclass, voting Democrat], the work goes on, the cause [of enslavement] endures, the hope [for permanent confiscatory taxation] still lives, and the dream [of the New World Order] shall never die.”

And apparently they think that their Democrat candidates will live forever.

For those unfamiliar, this is a parody of Fat Boy Ted Kennedy’s “I’m-a-Loyal-Democrat-Over-Country” speech at the 1980 D convention. He had at the very last moment, before he was utterly humiliated by a vote, that his cowardly acts at Chappaquiddick had done him in. He would never be president.

It’s sort of a parody, but a truthful one. Democrats want the NWO.

In 1972 a guy named Tom Eagleton was McGovern’s initial choice as a running mate (his preferred choices declined his invitations). Following their long-practiced tactic of lying, a practice which continues, the Democrats kept from the public Eagleton’s bouts with depression and his associated hospitalizations. When the facts came out, Eagleton was bounced from the ticket. (Shriver, carrying a Kennedy taint, became the VP choice.)

Today Democrats are loud and proud about having a mentally-challenged candidate. And this one heads the ticket, not a mere VP choice.

My thoughts run along this line. The Ds will ride the Biden horse solely because he’s the “best” (cough) they’ve got in terms of getting someone elected. They really do want to go full-bore with the socialism stuff that Bernie’s pushing, but think it’s too much, too soon in terms of duping the voters. Biden, they believe, appears more moderate. (He’s not of course; he’s full lefty.)

The key to watch then is the VP choice; that person is the real D candidate. If, the Lord forbid it from happening, that Joe’s elected, the course will be set. Shortly after inauguration, Joe’ll have a fall or some other “event” triggering the 25th Amendment. Include in the mix of options pushing Biden to the side is simple assassination.

Rush Limbaugh once had a riff on Jurassic Park titled “Geriatric Park”. That describes the Dem field.

(shaking my cane at you) You mind your manners about we geriatrics! (Now, where did i lay the keys for the DeSoto?)

Bernie’s badge needs a couple of wires coming out of it.

I honestly thought that Warren was going to stuck it out playing the odds that both of these clowns were going to have medical emergency in the next 6 months that would take them out of the running.

Given that Burney has had a recent heart attack, and Sleepy Joe is showing classic signs of early Dementia, it is highly unlikely that either would be able to serve out their first term in office. So watch out for their V. P. picks. I have a suspicion that the Dambicrats are lining up some freakishly leftist candidates who could not be elected on thrir own merit to fill that spot.

If the Dems do nominate an open or even tacit Socialist the Repubs will have an easy time exploiting the fragility if either Bernie or Biden and the consequences of their potential demise.
My guess is for a relative unknown who has disguised their tru colors. Interesting times.