Because Beto’s campaign was so successful? 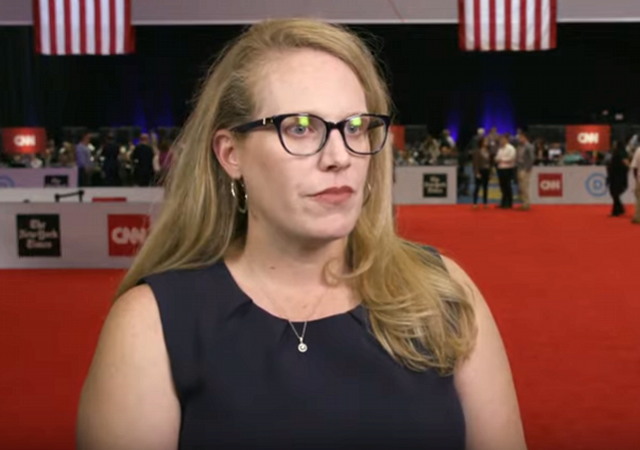 Now that Joe Biden has moved back into the position of front-runner with recent primary wins, he is making changes to his campaign. He just hired Jen O’Malley Dillon, the former campaign manager for Beto O’Rourke, to be his new campaign manager.

Dillon also worked for the Obama campaign, although in a smaller role.

Joe Biden is shaking up his operation and replacing his Democratic presidential campaign manager as he tries to finish his primary fight with Bernie Sanders to win the Democratic nomination and look ahead to a general election battle ahead with President Trump.

Biden officials said Schultz will now focus on “organizational planning for the general election and continuing to bolster the campaign’s external outreach.”

The move comes as Biden has taken a large lead over Democratic nomination rival Sanders in the crucial race for convention delegates. That’s come thanks to major victories in the South Carolina primary and the Super Tuesday states, and this week in Michigan, Missouri, and Mississippi. While Sanders – the populist senator from Vermont – remains in the race, his window to win the nomination is closing fast.

Now that the Democrats are coalescing behind Biden, it’s no surprise that people are rushing to join his team. A recent uptick in his fundraising also means there is money to be made by new staffers and consultants.

As far as campaign management goes, it sounds like there was some drama happening behind the scenes.

O’Malley Dillon, 43, most recently managed Beto O’Rourke’s failed campaign for president and played a role in his endorsement of Biden in Texas, a source familiar with the campaign said. She also served as deputy campaign manager for Obama’s 2012 reelection effort and, before that, was the Democratic National Committee’s executive director during Obama’s first term. The news was first reported by the Washington Post.

Schultz will remain with the campaign and “turn his focus to organizational planning for the general election and continuing to bolster the campaign’s external outreach,” according to a Biden campaign statement.

While the timing of the news was a surprise to allies of the campaign, the replacement of Schultz wasn’t. The campaign had been beset with operational problems in the early stages, from poor fundraising to ground-game stumbles that led to big defeats in the first three early states.

Some within the campaign questioned the pressure to blame Biden’s string of poor early state showings on the campaign manager instead of the candidate, whose lackluster debate performances and speeches haunted him in New Hampshire and Iowa, the first two early states where retail politics is a must.

I’m not sure how much good a change in campaign management will do for Biden. He is who he is and will still sound the same when he speaks on the campaign trail. He is certainly not going to improve with age.

Did Joe Biden forget he already had a campaign manager ?

First thought that popped into my mind when I saw that picture: Transgenders are everywhere.

notamemberofanyorganizedpolicital in reply to DouglasJBender. | March 13, 2020 at 2:06 pm

Probably one of Hunter’s children!

Is that a guy? I hear she excels at helping candidates fail. She’ll have her hands full with Dementia Joe and his bizarre behavior.

notamemberofanyorganizedpolicital in reply to Ghost Rider. | March 13, 2020 at 2:07 pm

This really doesn’t matter since Big Foot Mike…er…Michelle and Hurricane Hillary are going to steal it from Ol’ Joe.

Stupid is as stupid does

After all, it did so well in Beto’s campaign …

And this is supposed to HURT Trump’s reelection?

Mx. Dillon is going to be busy. Joe isn’t going to be any less gaffe-tastic in the general election. His campaign isn’t exactly a well-oiled machine. The Bernie Bros are mad as hell — they were in 2016 as well and most came home but I’m not sure they will this time. But perhaps putting Dillon in charge, from the Beto campaign, will reassure some of them.

notamemberofanyorganizedpolicital in reply to stevewhitemd. | March 13, 2020 at 2:09 pm

Bernie Bros are already making it clear they’ll not vote for any DEMS if Bernie is cheated out of it a 2nd time….
….which he is already being cheated a 2nd time…..

Because female, and two last names.

Say what you will, that’s one head full of sniffable hair, there.

notamemberofanyorganizedpolicital in reply to tom_swift. | March 13, 2020 at 2:27 pm

Ol’ Joe is gonna sniff himself to death!

Haha, Ol Joe has finally met his match! Go ahead, sniff me ‘bro! I’m just like you 🙂

Beto has the inside track to be his VEEP. Geographic balance and Joe probably thinks that he’s getting a Hispanic running mate.

One rather suspects that the old campaign manager got fired for telling Joe to stop getting combative with potential voters.

I am interested by the specific choice of -Beto’s- campaign manager so soon after Old Joe gushed praises on Beto himself. Certainly she must have thought that Beto’s anti -gun position was a winner or he wouldn’t have taken it (Right?).

Could Beto be the surprise choice for VP? He certainly has that whole Justin Trudeau shtick down pat, and it’s worked twice now in Canada.

She won’t just tell him to stop, she will wrestle him to the ground.

Not if Jill is anywhere nearby she won’t!

Will Biden now get up on tables and babble incoherently?

I’m not sure how much good a change in campaign management will do for Biden. He is who he is and will still sound the same when he speaks on the campaign trail. He is certainly not going to improve with age.
———————–
They’ll use the virus as an excuse to hide him from the public. Only staged events heavily choreographed and edited for as much as they can get away with.
Kind of like how they tried to hide hildabeast last election.

That virtual town hall should be a lesson unto us all. I’ve never seen a Townhall quite like it!