Biden Promised to Pick a Female Vice President. But Why?

Biden Promised to Pick a Female Vice President. But Why?

It’s sexist to pick a female because she is a female. 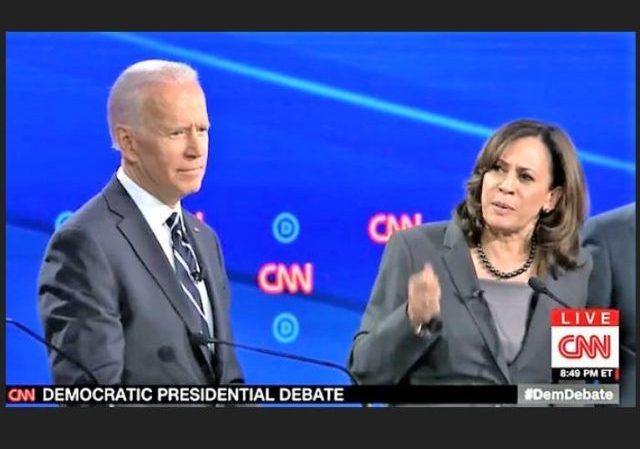 Great, but why? Because she is qualified or simply because of her chromosomes?

Number one, I committed that if I’m elected president and have an opportunity to appoint someone to the courts, I’ll appoint the first black woman of the courts. It’s required that they have representation now. It’s long overdue.

Secondly, if I’m elected president, my cabinet, my administration will look like the country and I commit that I will, in fact, appoint a — I’d pick a woman to be vice president. There are a number of women who are qualified to be president tomorrow. I would pick a woman to be my vice president is. Number three, I’m the guy that wrote the domestic violence law. I’m the guy that put in the prohibitions that no one who abuses someone else should be able to own a gun. Period. They should not be able to own a gun.

Wonderful. But I wonder if he will concentrate on the female’s qualifications or just try to appease the left.

Our ancestors fought so females could be equal. They wanted equality, not superiority. They didn’t want people to judge them on their sex.

It’s not very feminist to push people to pick you based on your sex.

It would infuriate me if someone picked or hired me because I’m female. I’d be so insulted if someone chose or appointed me to fill a quota. I’m more than my chromosomes.

You are lame if you pick or don’t pick someone based on their race, sexual orientation, or sex.

The Washington Post already latched onto Biden’s promise because it ran an article about the women possibly on Biden’s shortlist.

The newspaper immediately named Sen. Kamala Harris (D-CA) as a running mate. Biden has praised her since she dropped out of the race in December. In one interview, he said he would consider her for a position in his administration.

Another option is Sen. Amy Klobuchar (D-MN). She immediately backed Biden after she dropped out of the race. He believed her endorsement helped him win Minnesota.

But again, is he doing this because the woman he chooses will have better qualifications than other choices?

If Biden and the left did not make such a big deal about picking a female, then maybe I would believe that he picked her based solely on qualifications.

Then again, Biden and the left can quickly use the sexism card against you as everyone did with failed Democratic presidential candidate Hillary Clinton if he does not win. If he picks Harris, they can use the sexism and racism cards!

Maybe Biden will go for the trifecta so the left can use the sexism, racism, and homophobe cards.

To change his diaper?

Warren is back home sipping on Coronas

He promised because women will flock to the polls and vote for him for that reason, and that reason alone, dontchaknow!

Does that include a biological male who identifies as female?

I thought he said a Black woman for SCOTUS

Klobuchar supposedly let slip that she is the VP

They wanted equality, not superiority.

Forget superiority. Nobody even has equality if they have to have their offices handed to them. Work for it and earn it like any other American if you ever plan to be taken seriously.

You know, I was part of the feminist movement back in the 60’s and that was what we wanted – the ability to do the jobs we were qualified for and not be shut out just because of our sex. We wanted to be seen as people and not sex objects. Sigh. I moved on when they started burning bras. Today’s feminists push the walking vagina image of women. It’s enough to make you weep.

He has to pick the worst. The worst happen to be Fauxcahantas, harris and clinton.

The best happens to be Gabbard. He’s too dumb to pick her: she’ be too threatening.

The current Governor of Georgia (Ask her, she’ll tell you she’s actually the Gov) is at least #2 on your list, right behind beer guzzling Lizzie. Of course because Poor Joe already has his black vote covered, he really doesn’t need her.

I would reverse your list of worst. Hildebeast, Willie’s Ho, and Shrieking Crow, in that order.

Agreed. Clinton would start looting the second she got in.

There is no way any living sane individual would pick Hillary as a running mate, not even at gunpoint. Stacy has proven to be a big-mouthed disaster larger than Biden. Liz is an unlikable cardboard cutout.

…but then he might choose Gabbard since she is the best looking of the bunch. It all depends.

She smells better too

It’s my understanding that Tulsi is a Russian agent. Bill’s wife told me.

Then there’s this treasonous pig:

Why is this surprising? She’s Muslim. Under Sharia law, non-Muslims are forbidden to make public displays of religious rituals.

I want the best and brightest not a liberal box of crayons fixing our problems.

Don’t worry, even if the top two offices are filled by incompetent figureheads, the rest of the government will be staffed by other members of the Democrat team.

Oh, wait, that’s still not “the best and brightest”.

Julia Louis-Dryfus is my choice.

“Number one, I committed that if I’m elected president and have an opportunity to appoint someone to the courts, I’ll appoint the first black woman of the courts. It’s required that they have representation now.”

One of the worst things that’s happened to our republic is the idea that people can be validly represented only by someone who is the same sex, race, ethnicity, or sexual orientation as them.

The Marxists tried to split us apart by class. That didn’t work.

The Neo-Marxists have apparently found a winner with this intersectionality nonsense.

From the woods of Chappaqua, a distant cackle is heard…

These idiots don’t even acknowledge that there are “men” and “women”. They don’t even know which shithouse to use. Still, my guess is “CREEPY JOE/WILLIE’S HO 2020”. What a bumper sticker.

Judge a person… human life by the color of her skin or another low information attribute. Diversity is a double-edged scalpel for its practitioners.

“Wonderful. But I wonder if he will concentrate on the female’s qualifications or just try to appease the left.”

What? Having ovaries and knowing what it’s like to menstruate isn’t an accomplishment? Hillary! Clinton said it was an accomplishment; in fact it was her only qualification and therefore every woman in America owed her their votes back in 2016.

Because he’s not into sniffing men’s hair.

If he doesn’t give Stacy, (I’m the Governor of Georgia), first right of refusal as well as a cabinet position, she WON’T go away. She’s made it clear that she’s interested and the only possible reason he WOULDN’T choose her would be racism.

Rain and wind and weather
Hell bent for leather
All the things I’m missin’
Good vittles, love and kissin’
Wishin’ my gal was by my side

This may sound kind of silly, but what about choosing a running mate based on their actual qualifications and accomplishments? You know, a meritocratic, “content of their character” kind of thing. Crazy, huh?

He needs the votes of people who hope he will die.

The Dhimmis are doing their damndest to undermine Dr. Martin Luther King’s aspiration that people ultimately be judged largely by their character, as opposed to their skin color.

Dennis Miller @DennisDMZ
“If the Democrat’s are really serious about putting a truly representative member of their Party forward in 2020, they must choose Rashida Tlaib. To not do so will be sexist, Islamaphobic and not loyal to their core message.”

He’ll pick Shrillary Shrooooooo. Two weeks after being elected, he’ll be declared senile, or commit Arkancide, and Shrill will be our POTUS.