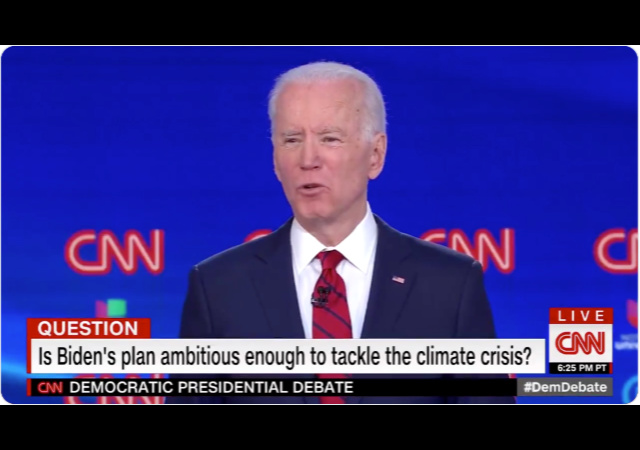 2020 Democratic presidential hopeful former Vice President Joe Biden moved to the left during Tuesday’s debate. He did this despite having a decent lead over Sen. Bernie Sanders (I-VT).

Biden may have damaged his chances in key swing states by going after the energy sector.

Americans have longed desired to end our dependence on Saudi Arabia and others on oil.

How did this happen? Financial Times explained in November:

The top oil producer and consumer exported 89,000 more barrels of crude oil and refined petroleum products a day than it imported in September, the first full month of a positive oil trade balance since the 1940s, the Energy Information Administration said Friday. Imports exceeded exports by 12m barrels a day a decade ago.

A variety of factors contributed to the shift: surging production from shale oilfields, the end of a crude oil export ban in 2015 and fuel economy improvements for cars that limited petrol demand even as highway travel rebounded from a recession.

Along with rises in natural gas output and renewable electricity generation, the oil shipments have pushed the US towards a long-invoked goal of energy independence, according to Rystad Energy, a consultancy.

A US petroleum trade deficit of $62bn in 2018 — 10 per cent of the country’s trade balance — is on track to become a surplus of hundreds of billions of dollars “thanks primarily to the gargantuan rise of output from the US shale sector”, the consultancy said this week.

The energy sector is huge for America. It drives the economy of some states, including Oklahoma. I live in Oklahoma and know that without the industry the state would suffer. It’s one reason why I don’t enjoy low gas prices.

“No new fracking and, by the way, on the Recovery Act, I was able to make sure we invested $90 billion in making sure we brought down the price of solar and wind that is lower than the price of coal, that’s why not another new coal plant will be built,” Biden continued.

Joe Biden: “no ability for the oil industry to continue to drill, period, ends” #DemDebate pic.twitter.com/STbBrh8DLg

Joe Biden: “no more, no new fracking” in my administrationhttps://t.co/gnHCex8NPv pic.twitter.com/bwvLaU2VyB

President Trump: “If you like automobiles, how can you vote for a Democrat who all want to get rid of cars”?

Joe Biden: I support “taking millions of automobiles off the road.” #DemDebate pic.twitter.com/YeG6BBdnFF

This is the first time Biden has called for a complete ban on drilling. In other words, he has no problem putting people out of jobs:

“The answer is yes,” Biden said. “We should, in fact, be making sure right now that every new building built is energy contained, that it doesn’t leak energy, that in fact we should be providing tax credits for people to be able to make their homes turn to solar power. They’re all kinds of folks — right here in California, we’re now on the verge of having batteries that are about the size of the top of this podium that you can store energy when in fact the wind isn’t blowing and the sun isn’t shining. We have enormous opportunities.”

I’m all for ending all subsidies, but it looks like Biden is picking favorites. It also looks like he wants to follow in President Barack Obama’s footsteps. Does anyone remember Solyndra?

Thing is, if you want to increase our dependence on different energy sources, you have to accept the fact that it will not happen overnight. It will take a while.

Sure Oklahoma will once again be pure red in a presidential election, but what about swing states?

It does not help that Biden also embraced the far-left Green New Deal proposed by Rep. Alexandria Ocasio-Cortez.

I understand liberals never think past the knee jerk but how are you going to pay the bill for the entire world if you destroy the ability to make money?

He doesn’t like biofuel, and its diverse derivative products. He does like the Green Blight, and other Green deals, which has been substantially harmed without labor and environmental arbitrage, and the prophecy of sustainable — let alone — [catastrophic] (i.e. progressive/monotonic or liberal/divergent) [anthropogenic] climate cooling… warming… change, to sustain its viability.

To quote Margaret Thatcher: “The problem with Socialism is that sooner or later you run out of other people’s money”

At this point, is there any doubt that the Democrats have no clue how to win back the working class voter? Biden already has the nomination gift wrapped and given to him. Why is he already driving away voters he will need in the general election? Hiring Beto’s ex-campaign manager? Scott Adams calls this Loser Think.

That senile old twat won’t be the Dim nominee. They’re going to pull a switch at their convention. Brace yourself for Cankles and Mooch.

Of course they are. The whole point of the superdelegates is to ensure that if the people choose the wrong nominee the party will correct them.

Forget about the lost jobs. Why do Democrats want us to be energy dependent on nations that hate us. If we don’t product our own oil and gas we will be buying it from Saudi Arabia, Russia and Venezuela (if they can ever start producing again).

It’s as much about national security as it is about jobs.

Can you spell death knell? Can the Dems honestly believe that mucking about with energy is the way to go?

The folks who vote Dem will vote Dems, whether Biden et al have a misguided energy policy or not.

Ah, but those swing and undecided votesr? Yeah the Green New Deal—that’s the ticket.

None of these stupid b_st_rds ever took physics or econmics!

I suppose every single American with a brain realized that Biden had been given the questions days ago and that his campaign and the moderators coordinated answers.
However it does not make the answers any less insane. In fact his senility is such that he can be fed sheer idiocy and repeat it on stage without thought.

Does Joe even have a clue that much of the output from fracking is natural gas and not crude oil, especially in the eastern US.
How are we going to power all the military equipment, f35’s aren’t solar powered, let alone commercial transportation.
How do we move cargo on rails and barge.
It would take decades to replace the auto and truck fleet with electric vehicles, those on the lower economic end don’t have the resources to buy new vehicles. The cash for clunkers program hurt those at the lower end of the economic scale by taking thousands of low priced vehicles out of the used car market that created higher prices in the market.
I have yet to see electric powered farm equipment.

But only good for 8 hours per charge, so their only customers will be municipalities, who don’t work them that hard and have access to a recharging station every night.

Joe eliminated 50% of the pool of available candidates for Vice President last night, he also eliminated 90-95% of the population for a Supreme Court Justice as well. All in less than a two hour period.

Mittens is a LOSER! A cipher, a void, a nothing. Nobody can hear you Mittens. Are you saying something? Bye-bye.

Barack Obama: “Under my plan of a cap and trade system, electricity rates would necessarily skyrocket.” (January 2008).

This is not exclusively about the energy sector jobs and associated revenue, which are indeed very important. The 800 pound gorilla in the corner, which is never discussed:

This will not go well for Biden. He would have gotten off easier if he said “No new fucking.”

To each application an energy solution that is best suited to its needs. Petroleum is a high-density, low mass energy transport ideal for mobile applications, especially with high loads, over long distances. It works. The Green blight, batteries, also works in their niche, but we should end the integrated sociopolitical myths that distort their value.

By all means, let’s put the Russians, the Iranians the Saudis and every OPEC country in the world that hates America in charge of the commodity that drives the economic engine of the world. Our grandchildren’s grandchildren will thank us… in Russian or Arabic and likely from under a Burka.

So the real Putin-backed candidate turns out to be Biden. Big surprise—the whole world knows that Democrats can be bought off as long as they take steps to damage America.

If Biden is going to persist with this Abe Simpson routine, he should conclude all of his statements with “I am not a crackpot!”

I remember when VP Biden was given the responsibility to manage the Recovery and Reinvestment Act spending. Last I heard the toll was approximately $787 billion.
Aka “stimulus package of 2009” or the “Obama stimulus.”
Anyone know how that assignment turned out?

In Biden’s own words:
“At a recent campaign event, former Vice President Biden got a little too honest with his audience when one attendee tepidly acknowledged that his/her economic prospects had indeed improved thanks to President Trump’s Tax Cuts and Jobs Act. Biden informed them that that would not be the case under his administration. He promised that their taxes would actually go up.
“Guess what, if you elect me, your taxes are going to be raised, not cut,” Biden said.
https://townhall.com/tipsheet/cortneyobrien/2020/03/06/nikki-haley-sums-up-bidens-campaign-message-n2563629?utm_source=thdaily&utm_medium=email&utm_campaign=nl&newsletterad=03/07/2020&bcid=b4d7529d0776ff16b380f8072fe8b41e&recip=21613252