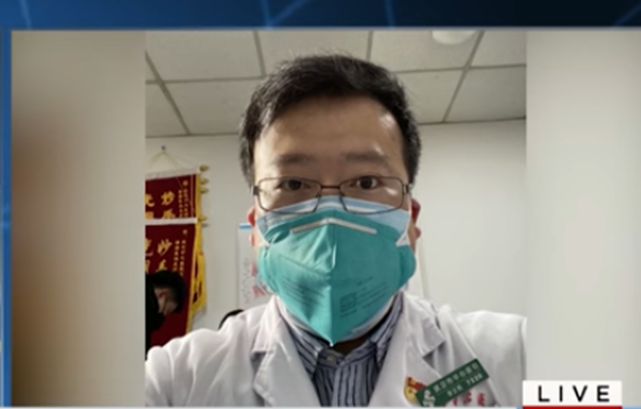 As of Friday morning, the world has over 31,481 cases of the Wuhan coronavirus reported from 28 countries and administrative states, with 638 deaths.

Reports say 4,824 of those patients are in critical condition and 1,563 confirmed recoveries.

Coronavirus Whistleblower has succumbed to the disease.

The Chinese doctor who was silenced by police for sounding the alarm about the new coronavirus long before Chinese health authorities disclosed its full threat died this week from the disease.

Li Wenliang, an ophthalmologist at Wuhan Central Hospital, became a national hero and a symbol of the Chinese government’s systemic failings last month.

Li had tried to warn his medical school classmates on December 30 about the existence of a contagious new virus that resembled the deadly severe acute respiratory syndrome (SARS).
The Wuhan Central Hospital said on its social media account that Dr Li was “unfortunately infected during the fight against the pneumonia epidemic of the new coronavirus infection.”

“We deeply regret and mourn this,” it added.

Word of the coronavirus outbreak began to spread in China thanks to Li, but his posts were censored and he was detained on January 1 for “rumour-mongering.”

Legal Insurrection’s first post on the Wuhan coronavirus was on Jan. 10th.

As the outbreaks continue, it is becoming clear that China’s government is likely censoring negative information online and in the news.

Internet platforms have also taken down posts that are critical of the government’s handling of the outbreak, which was first detected in Wuhan, the capital of China’s Hubei Province, the report said.

China has defended its efforts to control the virus and urged other countries to “support” their measures, according to foreign ministry spokeswoman Hua Chenying.

The crisis has been a “blow to public confidence” in the Communist Party.

It turns out the rapid construction of hospitals in Wuhan may have been more a “grand gesture” by Beijing to visually show an uneasy public that the situation was being handled.

It doesn’t appear to have worked.

President Xi Jinping, meanwhile, has been mysteriously absent from the front lines of the battle against the coronavirus.

The crisis has been a “blow to public confidence” in the Communist Party,[Kacie Miura, a research fellow at Harvard Kennedy School’s Belfer Center for Science and International Affairs] said.

“Several county-level officials have already been removed from their posts,” she said. “But whether scapegoating local officials will be enough to preserve the CCP’s legitimacy is an open question.

A case of the Wuhan coronavirus was confirmed in Wisconsin, which brings the number of people infected with the potentially deadly disease in the US to 12.

The adult patient traveled to Beijing before falling ill, and was exposed to people with the virus while traveling in China, officials with the Wisconsin Department of Health Services said.

The unidentified person’s condition is reported to be mild, and did not require hospitalization, officials said. They are in self-quarantine at home.

“The risk of getting sick from 2019 novel coronavirus in Wisconsin is very low,” said State Health Officer Jeanne Ayers. “We are responding aggressively to the situation and monitoring all developments.”

The Centers for Disease Control and Prevention (CDC) is in the process of testing 76 people for the infection within the country.

Prime Minister Shinzo Abe said that Japan has decided to refuse entry to noncitizen passengers on board a luxury cruise ship that is set to arrive in the country later this week as passengers are reported to be infected with the virus.

The 82,000-ton ship in question is the Westerdam, which departed Hong Hong earlier this month and expected to arrive at a port in Okinawa on Saturday.

The decision came as concern grew earlier in the day over the plight of over 3,700 people on board the Diamond Princess quarantined off Yokohama as 10 more cases of the new coronavirus were detected, raising the possibility of a nightmare scenario of a mass infection of people in a confined space.

The latest figure brings the total number of confirmed infections in Japan to 45, including the 20 people who have now tested positive on the cruise ship.

georgfelis in reply to notamemberofanyorganizedpolicital. | February 7, 2020 at 7:16 pm

I’m willing to place an equal amount of credibility on each possibility.

JusticeDelivered in reply to notamemberofanyorganizedpolicital. | February 8, 2020 at 9:11 am

The bottom line is that the Chinese government delayed responding ten days, and by then 5 million Wuhan residents spread out all over China.

But do we know that’s how he died? I think it’s very possible the government may have killed him for speaking up. Not the first time; certainly not the last.

notamemberofanyorganizedpolicital in reply to Sally MJ. | February 7, 2020 at 6:12 pm

A Chinese Province known as Arkancide?

I think he died of the disease and it says a lot about the inadequacies of the Chinese medical care which is not first world quality.

It doesn’t really matter how good or bad the Chinese Medical system is – it has been overwhelmed.

One could argue that China’s persecution of those who first rang the alarm about this are at fault for allowing those who were infected to spread out over China. China’s very own swamp critters caused this problem to explode.

The site does not define what is “critical”, though I would suspect that it would be intensive care or with a lot of complications.

Almost all of the criticals are in China and there is no information of the number of criticals moving to the recovered status or to the deceased status. I’ve been watching the other countries that have critical cases but I haven’t seen any changes in status to give us a clue about the nature of “critical”.

There is a note on the site that they “will publish statistics on critical and recovered cases in the coming days.” The current death rate is 2%. If the criticals don’t survive, the death rate approaches 20%. Yikes!

And how many Leftists have praised Xi and the ChiCom form of government? When you can erase and ignore suffering and death stats, life looks pretty good under communism.

I think that china is deflating infection numbers and deaths to 1/10th, and inflating cured by 10. They are shoveling crap.

Yes, there is a lot of evidence that the Chinese government is significantly under-reporting every single coronavirus statistic. Deaths may very be north of 1000, and climbing.

I think the DEMOCRAT DEBATES must have Started that Virus.

There was a leak about a week ago, and deaths were about 25,000 then. Other reports lend credence to that, in that so many dead bodies are being burned while there is little traffic, that there are lots of complaints about air quality.

I bet that lots of chinese people are disappearing without a trace. How many of those died as a result of the government persecuting doctors instead of listening?

Does anybody actually think this was a coincidence?

notamemberofanyorganizedpolicital in reply to snopercod. | February 7, 2020 at 8:36 pm

You mean a nice way to control the Depression weary workers who had been getting really testy against their government elitists?

A friend of mine in Kunming, Yunnan, which is 1,000 miles away from Wuhan, reports that stores are closing and streets going quiet.

We can’t rule out the possibility that the Chicoms murdered Dr. Li to silence him.

One of the saddest stories of the year if not decade. Rest In Peace. So much evil abounds. My heart goes out to the Chinese people. It is heartbreaking on so many levels.

My husband & I were scheduled to take a three week trip to China at the beginning of April. Thanks to this courageous Doctor our tour was cancelled. RIP brave Doctor Li.