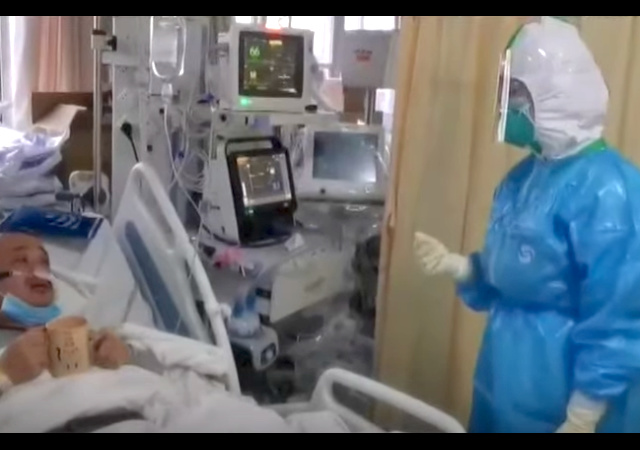 As of Tuesday, the world has over 45,171 cases of the Wuhan coronavirus reported from 28 countries and territories, with 1,115 deaths.

Reports say 8,216 of those afflicted patients are in critical condition, and 4,794 are confirmed recoveries.

In the United States, there are 398 People Under Investigation (PUI) for possible Wuhan coronavirus, distributed in 37 states. Of those, 13 have tested positive (located in six states), 318 have tested negative, and 67 cases have pending diagnosis status.

US military approves 11 coronavirus quarantine camps next to major airports

The Pentagon is setting up 11 quarantine camps on military bases near major airports across the country in anticipation of an influx of American citizens returning from China in need of monitoring for the deadly coronavirus.

The 13th US coronavirus case was confirmed in California on Tuesday. The deadly strain, which is now being called COVID-19, has killed 1,107 people and sickened more than 42,000 worldwide since the outbreak began in Wuhan, China, in late December.

The Department of Defense approved a request from the Department of Health and Human Services early this month for the possible use of military facilities to accommodate 1,000 people who may have to be quarantined upon arrival from overseas through the end of the month.

An evacuee who tested positive for the coronavirus in San Diego was mistakenly released back into quarantine at the Miramar Marine Corps Air Station because someone mislabeled their test sample.

Four evacuees were brought from MCAS Miramar to UC San Diego Medical Center and provided samples for testing within the last week. Three of those four samples were not labeled in compliance with the same regulations between UC San Diego Health and the CDC, according to a Centers for Disease Control and Prevention spokesperson.

Because of this, when the samples were brought to the CDC in Atlanta, three of them were not immediately processed.

Coronavirus illness given official name Covid-19, as hope rises that the number of cases will peak soon

The World Health Organisation (WHO) gave an official name – Covid-19 – to the disease caused by the coronavirus, as statistics now suggest that infections could level off in the coming weeks.

China’s National Health Commission said on Tuesday that the country had reported 108 new deaths from the virus – the first time that 100 or more fatalities were recorded in a single day.

The outbreak, which was generally believed to have originated from Wuhan in central China, has killed 1,018 people worldwide – including one death in Hong Kong and another in the Philippines.

But Zhong Nanshan, one of China’s top respiratory disease experts, predicted that the outbreak could peak this month, according to state broadcaster CCTV.

One point to note: Sunshine is a powerful disinfecting agent, as I noted yesterday. As spring begins, and there are more hours of sunshine, the season change can only help end the current outbreak.

At least 500 Wuhan medical staff are infected with coronavirus

At least 500 hospital staff in Wuhan had been infected with the deadly new strain of coronavirus by mid-January, leaving the city’s hospitals short-staffed and troubling health care workers.

While the government has reported individual cases of health care workers becoming infected, it has not provided the full picture, and the sources said doctors and nurses had been told not to make the total public.

The reason for this edict was not explained, but the authorities have been trying to boost morale among frontline medical staff, especially following the death of Li Wenliang, who was killed by the disease weeks after being reprimanded by police for warning colleagues about the new virus.

China’s clearly not aiming to win any international popularity contests.

Chinese researchers have applied for a national patent on an experimental Gilead Sciences Inc. drug that they believe might fight the novel coronavirus.

The Wuhan Institute of Virology — based in the Chinese city at the center of the epidemic — has applied for a patent in China for the use of the antiviral drug, known as remdesivir, in treating the ailment. The application was made on Jan. 21 together with a military academy, according to a Feb. 4 statement on the institute’s website.

Talk about poor optics. I predict that when this outbreak is over, the plans for other countries to decouple from China will spread even faster than this horrible contagion.

This is a good thing.

Why yet another name? It’s Wuhan Virus.

I have no idea why they had to give it another name. Perhaps 2019-nCoV just wasn’t catchy enough for the bottles of vaccine. So we get COVID-19. A little better. But not much

The cynic in my says the WHO didn’t want to name it WuHan virus as that would have pissed off the Chinese government with there hair-trigger, snowflake sensitivities and caused problems.

Great Maker, the lengths organizations will go in their attempts to not piss off the Chinese government.

Tedros said the agency wanted to avoid stigmatizing a country or particular group, so it chose a name that did not refer to a geographical location, animals, an individual or a group of people.

So i guess we all have to name our diseases not to “stigmatize” any country or people. Jesus, when will this snowflake nonsense end.

So what do they call Ebola? Since that is named for a river in the Congo.

But WHO went out of its way to find a name that did not refer to a geographical location, an animal or an individual or group of people. The name also had to be pronounceable and related to the actual disease.

Those guidelines follow guidance WHO issued in 2015 to minimize the “unnecessary negative impact” of diseases named on things such as travel, tourism or animal welfare.

AND…a side note.
can a mod/site admin PLEASE add the bbcode section to comment block so we are not forced to hand type code?
don’t tell me it can’t be done, managed (admin/server admin/mod/etc) many sites using WP and other software (including largest android site in the world) and know anyone that says that is ….well…..foolish.

I wonder when Winnie the Flu will gain traction?

Yes, this is me with sleep deprivation.

notamemberofanyorganizedpolicital in reply to MajorWood. | February 12, 2020 at 9:57 pm

I move a motion we call it the:

China deserves credit for this and other nasty pathogens.

Can’t stigmatize a country that let loose a synthesized virus (thank you UNC-Chapel Hill also) that has the potential of eclipsing pandemics of the past 200+ years at least. As the number of dead rises, time to revert to Wuhan Flu.

All of the reported deaths have occurred in China.

A request. Please remove the above statement from your post. There are at least two deaths that have occurred outside of China. One death in Hong Kong. And one death in the Philippines. Thanks.

It only takes one mistake like this to introduce the virus into a city population and cause a major outbreak. Amazing that government officials still want us to believe they have this situation under control when it is very obvious that they don’t have a clue as to what they are doing.

Patenting a product made by an American company in China? So they want to make money selling to everyone else where patent law is enforced while availing themselves of a drug that has not been approved for sale in the US….hmmmmm.

First of all, who grants the patent? Would Gilead sell the patent to them? If it isn’t approved in the civilized world, who could the ChiComs sell it to? Sounds more like an attempt to hoard a cure for themselves.

Also, only 1115 deaths and all in China? How inefficient are those crematoriums who are reportedly backed up despite operating 24 hours a day? I’m guessing the true number of deaths in the tens of thousands already.

not saying its related just….timing of this as well as your comment made me think you may be interested.

Looks like China has confessed they have been rigging the numbers.

EVERYONE who bought into the initial reports was so wrong. It is not only NOT contained but is spreading exponentially. That is why the market is down today.

As to Gilead, why wouldn’t they just ask for an exemption from the FDA banning the distribution of an non-approved drug while signing a hold-harmless contract? Why do they have to own it?

EVERYTHING about working with China stinks. I hope BoJo is paying attention. I know Trump will play this strong card during the US/UK trade agreement talks. BoJo is already proving to be a brazen fraud.

UPDATE: MORE SICK BECAUSE AUTHORITIES CONFINED PASSENGERS IN CABINS LIKE MICE IN A HOTZONE TEST LAB.

Call it “The Chinese Fru”.

I’d be OK if they called it “bat shit crazy soup disease”.

Well, I suppose a descriptive name could be helpful. How about something accurate, like BIFUNx, or Bioweapon Fuckup Number X.

Plenty of room for expansion there, as countries like China continue their fuckupery into the future.

I think strange that schools full of children getting infected are not being reported as well as no infections in Africa. Omitted news is fake news too.

All other countries had 6 new cases and no deaths.

Normally, there is a second update at 7 PM ET. We’ll see if there is another uptick in cases/deaths.

– Surge in number of cases due in most part to the adoption of a new diagnosis classification.

– In conformity with other provinces, starting today, Hubei Province will include the number of clinically diagnosed cases into the number of confirmed cases.

– There were 242 new deaths (including 135 clinically diagnosed cases).

It’s an admission that they have been falsifying the data. Interesting our own media is accepting the explanation as an innocent oversight.