Pets wear masks in China. United flight from SF put on lockdown at Heathrow after passengers are suspected of having coronavirus. 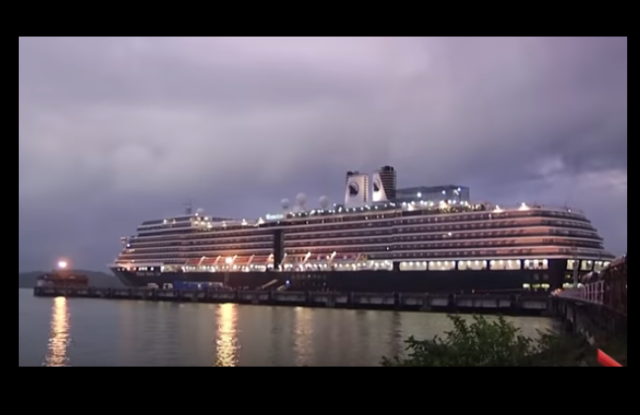 In the United States, there are 443 People Under Investigation (PUI) for possible Wuhan coronavirus, distributed in 41 states and territories. Of those, 15 have tested positive (located in six states), 347 have tested negative, and 61 cases have pending diagnosis status.

U.S. passengers stranded on ship due to virus fears, disembark in Cambodia on Valentine’s Day

Jubilant US passengers were greeted with Valentine’s Day flowers and kisses from Cambodia’s Prime Minister today as they finally disembarked a ‘pariah’ cruise ship after two weeks of being stranded over coronavirus fears.

Prime Minister Hun Sen presented red roses and embraced some of the 1,500 passengers who poured from the Westerdam after they had been turned away from five countries despite no cases of the deadly contagion aboard.

Mr Hun agreed for the Westerdam to dock at the port of Sihanoukville yesterday after Thailand, Japan, Taiwan, the Philippines and Guam had barred the ship.

The ship’s galleries were filled with cheering passengers when Mr Hun’s helicopter swooped onto the tarmac on Friday afternoon before he greeted them and made a speech.

Mr Hun said: ‘Today, although Cambodia is a poor country, Cambodia has always joined the international community to solve the problems that the world and our region are facing. If Cambodia did not allow this ship to dock here, where should this ship go?’

In China, cats are wearing masks for coronavirus protection

I will simply point out that it is being done to make the owners feel better: The protection is substantially reduced once the eye-holes are cut into the mask.

As the deadly coronavirus outbreak continues to ravage the country, pet owners in China are putting on makeshift masks on their furry friends.

Photos on the Chinese social media app Weibo show pets – namely cats – wearing the makeshift masks, many of them made from traditional surgical masks. Owners are cutting holes in the material to accommodate the animal’s eyes while the rest of their face remains covered.

The photos of the new trend surfaced after China’s National Health Commission said the coronavirus could affect cats and dogs, The Sun reported. But is it true pets can catch the novel coronavirus, known as COVID-19?

It’s not likely — according to the UC Davis School of Veterinary Medicine.

“Coronaviruses occur in virtually every species of animal, including humans, and are commonly associated with unapparent or transient intestinal and respiratory infections. They tend to be very species-specific and cross-species transmission is uncommon,” the school said on its website earlier this month.

A United Airlines flight from San Francisco has been placed on lockdown after landing in London after passengers on board complained of having symptoms associated with COVID-19.

Passengers on United Airlines Flight 901 were told by the captain to remain in their seats after landing at Heathrow Airport on Friday morning because someone might have the contagious infection, which is now named SARS-CoV-2.

…The flight was among eight planes simultaneously put on lockdown on the Heathrow tarmac after it arrived from San Francisco.

British passenger Andy West told MailOnline that passengers were warned by the plane’s captain that they could be on the tarmac for a while because ‘seven other planes’ also had suspected cases.

Here’s hoping that the woman survives both the disease and her government.

A North Korean woman living in Pyongyang recently tested positive for coronavirus and those who had contact with her are being quarantined, a South Korean newspaper reported on Friday, citing a source in the reclusive state.

The woman showed symptoms of the infection after a trip to China, according to the JoongAng Ilbo. Further information ― including personal details of the patient, the exact date of her infection and her condition ― remains unknown.

North Korea’s state broadcaster said on Feb. 2 that the country had yet to confirm any case of infection, its most recent update. If the report is true, the woman’s infection would have been confirmed early this week.

“As the chances of coronavirus spreading into North Korea increase, authorities started putting all people who had overseas trips recently into quarantine for a certain period,” the source was quoted as saying. “The first patient is a woman living in Pyongyang. All people who had contact with her are being quarantined.”

Considering the number of new items produce, packaged and shipped directly into our markets and then bought, sold or handled by the average US consumer must run very high on a daily basis. Puts Consumer Advice of “Buyer Beware” in an entirely new light.

Most commerce with China is shipped via ocean freight, much longer than the week or so the virus survives. Air freight, on the other hand might be an issue, but that is a much smaller amount due to cost.

Sorry, I gave you a down-vote by mistake. The ‘reply’ is too close to that one!

Having relations with the ChiComs is a big mistake. They steal our technology, want to bury us, sell us cheap crap we could make better ourselves, and infect the world with ChiCom diseases.

The Chinese government and the American Media act as if all is going well.

But you only have to look at what the Chinese are doing and those things should have everyone worried.

Their actions are totally opposite of what they claim.

Lets be clear, China is not acting to protect other countries from their virus. Their actions are meant to delay spread of the virus in China.

This virus will spread, but if they can delay such for a month to six weeks, then handling fallout will be much easier.

With a vaccine not being available for 18 months, a majority of humans are going to have to acquire immunity the hard way.

I thought the Chinese were supposed to be smart?

Masks that have shown to be ineffective in humans…for cats???? with eyeholes in them???

I’m pretty sure the smart Chinese fled China, which is why they do so well as a class in western countries. But that leaves the rest of the bell curve in the home country.