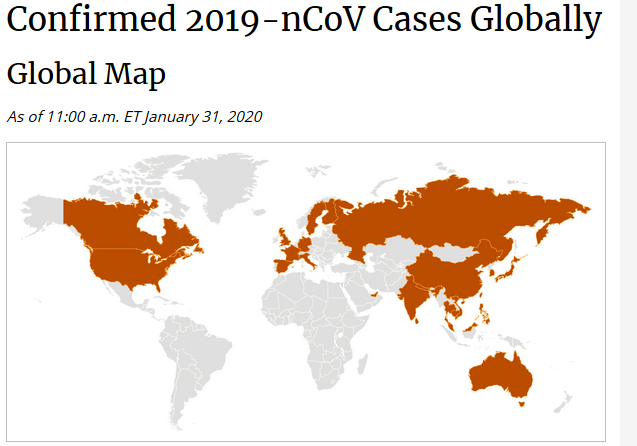 As of today, there are approximately 14,000 cases of Wuhan Coronavirus infections worldwide. The death toll stands at 304, with 27 nations or administrative areas reporting patients who are infected with the pathogen.

An eighth U.S. case of infection with the coronavirus has now been reported in Massachusetts:

The Massachusetts Department of Health said in a press release that a man in his 20s, who recently returned from China and lives in Boston, tested positively. The man, who was not named, had traveled to Wuhan, the city where the virus originated.

“We are grateful that this young man is recovering and sought medical attention immediately,″ said Massachusetts Public Health Commissioner Dr. Monica Bharel. “Massachusetts has been preparing for a possible case of this new coronavirus, and we were fortunate that astute clinicians took appropriate action quickly.”

The case was the first reported in Massachusetts. Health officials said that the risk to those living in the state remained low. The previous U.S. cases were reported in California, Illinois, Washington state and Arizona

About 99% of the infections and 100% of the deaths are being recorded in mainland China.

Due to its close proximity to and its recent challenges with Beijing, the people of Hong Kong are getting nervous about being hit with a serious outbreak with the new virus.

The concern is such that Hong Kong’s nurses are threatening to go on strike if the city does not close its border with mainland China:

Some nurses have already engaged in unauthorized sickouts to protest what they say is a lack of action by Hong Kong officials.

Hong Kong Secretary for Health and Food Sophia Chan broke into tears while being interviewed on a local radio station on Saturday as she urged doctors and nurses to stay on the job. But Chan also said she’s aware of the incredible stress the Wuhan coronavirus outbreak is placing on medical staff.

Hospitals in the city are scrambling to set up isolation wards and are already overwhelmed with nearly 700 possible cases (although there have only been about a dozen confirmed cases through the end of January).

Based on the data that is currently available, the transmission rate is 3-4 (3 to 4 new infections stemming from one infected person) and the fatality rate is approximately 2%.

Alarm is growing across the globe, especially in the era of social media streaming speculation dressed up as fact…as well as state propaganda minimizing the struggles related to this outbreak.

To that end, Facebook says it will take down misinformation about China’s fast-spreading coronavirus.

The world’s biggest social network said in a blog post that it would remove content about the virus “with false claims or conspiracy theories that have been flagged by leading global health organizations and local health authorities,” saying such content would violate its ban on misinformation leading to “physical harm.”

The move is unusually aggressive for Facebook, which generally limits the distribution of content containing health misinformation through restrictions on search results and advertising, but allows the original posts to stay up.

India. That is bad.

But suppression of information is as dangerous as the disease.

What news source merits our confidence?

Links I use for Wuhan Virus information:

Leslie Eastman in reply to notamemberofanyorganizedpolicital. | February 2, 2020 at 12:50 pm

This virus was first detected in late 2019, so the formal designation includes that year.

Nothing like a global panic over the flu. For comparison. Should help sell a lot of vaccine.

what better way to discourage mass congregations and demonstrations than by promoting an epidemic panic?
let’s let out this low mortality pathogen and scare the hell out of the hong kong protesters.
nothing else has worked

This is not a normal flu. Read carefully. What we know is bad enough, mutations may well make this worse than the 1918 outbreak. Time will tell.

I guess Facebook’s world-renowned epidemiology staff is busy with other matters. So they’ll farm out the job of separating the factual wheat from the chaff for us. Maybe they can get the Southern Poverty Law Center on the job.

When it starts impacting minorities they will claim it is a racist ailment.

That has already happened, due to the jokes about bat soup.

Also, ordinary research into how to make a vaccine and how to figure out what parts of the viral genome are important, is now “proof” that the virus is man-made. Yes, indeed, there is chaff on the Intertubes.

I recommend going to YouTube and searching for “Serpentza” and/or “Laowhy86” and watching their videos on Coronavirus in China. There is a lot of stuff happening in China that is not making the news here.

Our 4th case was judged not to be coronavirus. It was in Washtenaw County, home of Ann Arbor.
Michigan is 4 for 4 of NOT having the virus.

When are we going to start calling it the King Flu? I’d even go for Sweet and Sour Sicken.

But maybe “Liz” can come and tell us all how were full of it to be worried and that the CDC and federal government knows what they’re doing. Such a condescending git like Liz seems to think she knows it all. /sarcasm