China’s President Xi Jinping may have know about the coronavirus outbreak earlier than first suggested. 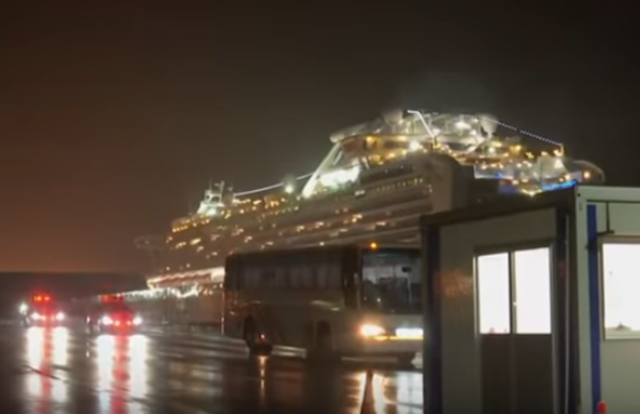 The Wuhan Coronavirus has now killed 1,776 people and shows no signs of being contained.

And more than 71,000 have caught the SARS-2 infection, including 454 on a cruise ship quarantined off the coast of Japan.

Ninety-five per cent of the 2,000 new cases recorded yesterday were diagnosed in Hubei, the deserted Chinese province at the centre of the crisis.

U.S. officials report that 14 American passengers evacuated from the Diamond Princess cruise ship that was quarantined in Japan had tested positive for the COVID-19, and were sent to military bases in California and Texas.

The State Department chartered the flights to transport more than 300 U.S. citizens from the ship, which had been docked off Yokohama since Feb. 3. The passengers landed Monday at Travis Air Force Base in Solano County, although some will continue on to Joint Base San Antonio-Lackland. All will face a 14-day quarantine on the bases.

The 14 infected passengers had been tested two to three days before the evacuation but officials received notice of the positive results after they had left the ship for the airport, the U.S. Departments of State and Health and Human Services said in a joint statement.

The passengers did not display symptoms, the statement added. They were isolated in a specialized containment area on the aircraft. All passengers were to be closely monitored by medical personnel during the flights and moved to the containment area if they showed symptoms, officials said.

As the medical community scrambles to find effective treatments for the coronavirus, Chinese physicians are treating coronavirus patients with plasma from people who have recovered.

Chinese health officials Monday urged patients who have recovered from the coronavirus to donate blood so that plasma can be extracted to treat others who are critically ill.

…Plasma from patients who have recovered from a spell of pneumonia triggered by COVID-19 contains antibodies that can help reduce the virus load in critically ill patients, an official from China’s National Health Commission told a press briefing Monday.

At least one of the 11 patients who received infusions of plasma from recovered patients has already been discharged, officials said.

Delta Air Lines and Hawaiian Airlines have both confirmed that a couple diagnosed with the coronavirus traveled on their flights in and around Hawaii earlier this month.

On Feb. 6, the couple, a husband and wife from Japan who are reportedly in their 60s, departed from Honolulu for Nagoya, Japan, on Delta flight 611, KHON2 reports. The State Department of Health [DOH] said that the couple previously arrived in the Aloha State on Jan. 28 and spent time in Maui until Feb. 3. That day, the couple traveled from Kahului to Honolulu on the island of Oahu on Hawaiian Airlines flight HA265, the airline confirmed.

In Oahu, the husband and wife stayed at the Grand Waikikian by Hilton Grand Vacations. It remains unclear at this time on which airline they traveled to Hawaii on and where they stayed while in Maui.

President Xi Jinping may have know about the coronavirus outbreak earlier than first suggested.

On January 20, Chinese President Xi Jinping commented publicly for the first time on the Wuhan coronavirus outbreak, and ordered “resolute efforts” to contain it. However, it seems like China’s leader knew about the situation far earlier than initially indicated.

…[A] transcript of an internal Communist Party speech appeared to throw doubt on this narrative, revealing Xi knew about and was directing the response to the virus on January 7 — almost two weeks before he commented on it publicly.

The revelation raises major questions about whether it was the central government, not authorities in Hubei, who dithered on their response, allowing the virus to spread through the country and eventually the world.

It also underlines the difficulty in maintaining Xi’s image — carefully cultivated by state media — as an almost omniscient ruler who oversees, and is aware of everything that is happening in the country. With criticism growing of the failure to contain the coronavirus, both at home and abroad, Beijing was faced with either choosing to admit that Xi was ignorant of the true nature of the crisis until almost a month into it, or that he was aware of it and involved in the response.

…[A] transcript of an internal Communist Party speech appeared to throw doubt on this narrative, revealing Xi knew about and was directing the response to the virus on January 7 — almost two weeks before he commented on it publicly.

Gee, what a surprise. The Chinese government has been lying to the rest of the world about the COVID-19 outbreak in China. Well, not surprising since they’e been lying all along. Both about the origin and impact of the disease in China. Just wish at this point that Chinese government officials would come clean on the origin (they created it) and how many infected and dead (a hell of a lot more than there are admitting) there really are in China.

It claims that the DNA shows it is natural. Another interesting thing is:

“Comparing virus from different patients and knowing how fast it mutates, makes it possible to say how many cases have occurred. “We get upwards of 200,000 total infections,” Bedford said. That fits with estimates based on mathematical models published by researchers at the WHO Collaborating Centre for Infectious Disease Modelling, Imperial College London, he noted.”

A number very close to the leaked document which claims a similar number of infections and even more important that there were nearly 25,000 deaths.

Sorry, not buying what he’s selling as I simply cannot believe that this virus passed from bats to some intermediary mammal in the past and then stayed dormant in this unknown mammal for 20 to 70 years until the fateful day in late November, early December where it was finally able to be passed on to and infect humans. And the rest is history. Nope. too many people trying way too hard to “debunk” (quotes deliberate) the idea that this is a bio-engineered virus that escaped from one of the two labs situated in Wahun City (Wahun CDC) or not too far away (Wahun Virology Institute) where it is known they’ve been doing virus research.

It claims that the DNA shows it is natural.

The genetic material in the virus is RNA. Specifically, positive sense, single-stranded RNA. And that is highly susceptible to mutation. Hence all those mutations that were found according to the article. But that doesn’t rule out artificial mutations.

I think people who really should know better should just stop pretending that they believe anything coming out of China.

Lying is a deliberate tactical doctrine of all communist governments. And “saving face” is an ingrained cultural imperative across Asia. Mix the two together, and even a zoned-out Pollyanna should be able to see that there is absolutely no possibility that the Chinese will come clean about an embarrassing cluster-f___ of this magnitude. None.

We should assume the worst; then at least we won’t be surprised later.

With at least 28 days of data, as seen at

Does the available information on # of cases, deaths, etc. fit any of the models for disease progression for an epidemic?

It would be interesting to see details of the models that JusticeDelivered cites: the 200K infection is 3X what has been reported.

The government that keeps on giving. They fly them into Kelly, and then, as they show symptoms, they drive them around the city.

The Diamond Princess started out with 10 cases. Despite their best quarantine efforts on the ship, the number infected grew to 450+ obvious cases. Then, despite the best testing efforts, 14 people who were thought virus free when removed from the ship turned out to be infected. Their contagion was only detected through very sophisticated examination. Normal screening failed.

This tells us that normal screening measures won’t be effective enough and practical Quarantine measures won’t succeed to prevent virus spread even when we do manage to detect and isolate carriers . There is no realistic possibility that the illness can be contained inside China, with any random “escapes” of the virus swatted down like flies the moment they appear elsewhere. There are just too many people who pass initial ‘casual’ testing who will later become transmitters. We cannot detect them all, and we cannot depend on ordinary levels of quarantine even if we do detect them. One the illness reaches a certain level, we will as China has, run out of effective isolation spaces.

So…hold on tight, it’s going to be a bumpy ride for the next few months.

We now have cases on American soil where the best medical minds can evaluate the virus. We should know within the next two weeks whether a million Americans are going to die from a Pandemic.

The US federal government already knows that millions of people in this country will become infected and many will die. Officials have already said that within two to four weeks we should expect thousands of cases. And it’ll only get worse from there on. It’s also why the military is preparing for an outbreak in the ranks and a pandemic in the general population.

As usual the US federal government has screwed the pooch and it will be the common citizens that suffer the most.

It’s just like “The Eyes of Darkness”,a prophetic thriller was written by the best selling American writer Dean Koontz, and was originally published in 1981 under the pseudonym Leigh Nichols.
“It was around that time that a Chinese scientist named Li Chen moved to the United States while carrying a floppy disk of data from China’s most important and dangerous new biological weapon of the past decade. They call it Wuhan-400 because it was developed in their RDNA laboratory just outside the city of Wuhan.”