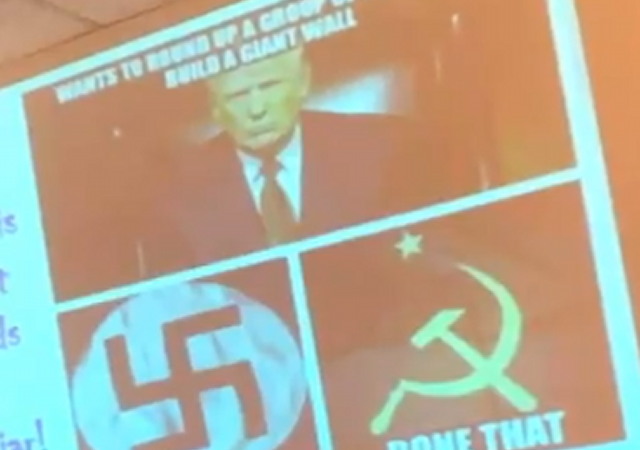 Many parents of children at this school are outraged, and who can blame them? This goes beyond poor judgement.

Take a look at the video below:

Isn’t Baltimore where almost no HS students were proficient at math?

They make up for that, with their proficiency at Trump hatred!

And then they complain when their Sh*thole city is called a Sh*thole.

And this is why people aren’t simply escaping from the city to the county, but to adjacent counties or even to PA to the north.

The professor interviewed made a good point: there is one context in which that slide would be appropriate — if it were presented as an example of outrageous claims made by politicians against their opponents. But that’s unlikely to be the case here.

As for the school’s pathetic excuse for an explanation, if that’s really what the slide’s creator intended then they just failed their own subject and have no business creating educational materials in it. Totalitarian regimes rarely feel any need to restrict immigration; they usually restrict emigration, because if they didn’t they’d soon find themselves without subjects.

One of the political columns that made a big impact on my thinking when I was a young person pointed out a huge difference between the USSR and South Africa: which way the border guards faced. Nobody was trying to sneak into the USSR; people were desperate to leave, not to enter. Whereas at the height of apartheid no black people were trying to leave South Africa, but plenty were trying to sneak in, volunteering to live under that “awful regime”.