Unions For Thee But Not For We: Leftist ‘Young Turks’ Fights Unionization

Unions For Thee But Not For We: Leftist ‘Young Turks’ Fights Unionization

“He said if there had been a union at the network it would not have grown the way it has.” 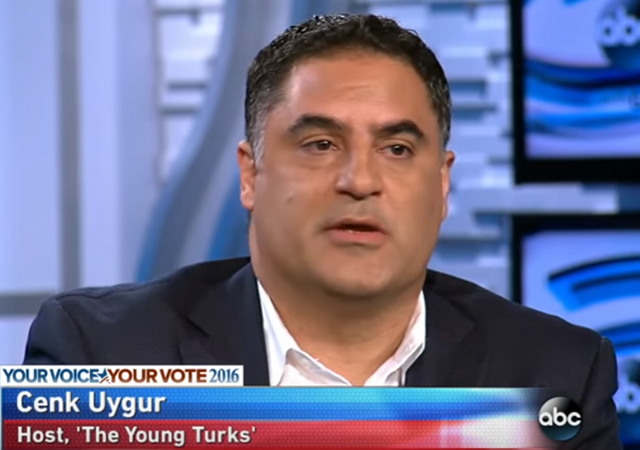 In a classic case of liberal hypocrisy, the progressive YouTube program “The Young Turks” is in turmoil because management is opposing efforts by employees to unionize.

Cenk Uygur, one of the founding hosts, who is also running for the congressional seat recently vacated by Katie Hill in California, is leading the charge against the union.

The Young Turks’ Progressive Founder Urged His Staff Not To Unionize

Top leadership at the progressive news network The Young Turks held an all-staff meeting at its office in Culver City, California, on Feb. 12. The regularly scheduled gathering was supposed to deal with personnel matters, but instead the focus turned to the staff’s nascent union campaign, which had just gone public.

Earlier that day, a Twitter handle claiming to represent TYT employees had announced on the social media platform their intention to form a union. In the staff meeting, the network’s co-founder and influential host, Cenk Uygur, urged employees not to do so, arguing that a union does not belong at a small, independent outlet like TYT, according to two workers who were present. He said if there had been a union at the network it would not have grown the way it has.

His talk ― at times emotional, the staffers said, with Uygur throwing his papers to the ground at one point, and chastising an employee ― seemed to contradict the progressive, worker-first ethos that TYT broadcasts to its millions of lefty followers.

Uygur is an outspoken supporter of Bernie Sanders, and as Alex Griswold notes at the Washington Free Beacon, opposing unionization is frowned upon in Bernie World:

The Young Turks, a left-wing and pro-Bernie Sanders YouTube network, is refusing to recognize its employees’ new labor union.

A week after TYT Union was formed to represent production and post-production workers at the popular liberal channel, the group announced that company leadership had refused voluntary recognition of the union. The refusal, which comes after Sanders proposed penalizing companies that refuse to recognize unions, is the latest instance of a left-leaning news outlet resisting unionization among its employees.

“This is a disappointing decision from an organization that presents itself as progressive,” the International Alliance of Theatrical Stage Employees (IATSE), the parent organization of TYT Union, tweeted. “Join us in telling [The Young Turks] to respect their so-called principles and respect their workers!”

The TYT Union also tweeted this:

When we announced our decision to go union with @IATSE over a week ago, we had hoped @TheYoungTurks would respect our choice and voluntarily recognize our union. We are dismayed to report that they have refused. #TYTlive

Uygur has even been called out by AFL-CIO President Richard Trumka:

This is union-busting, plain and simple. I call on @CenkUygur and @TheYoungTurks to follow their principles and voluntarily recognize the card authorization vote of @TYTunion. https://t.co/J561GTptff

This is not only hypocritical, but suggests very poor judgement on Uygur’s part. Then again, what should we expect from someone who named his show after the Turkish political faction largely responsible for the Armenian Genocide of the early 20th century?

this clown is everything the left gives Limbaugh credit for.

He’s higher up than what they give Rush credit for; he’s a founding father of the Justice Democrats (i.e. the group behind AOC and her Green New Deal). And he’s no clown. These are serious people with a serious purpose and the resources/backing to make them a very real threat. /just saying

He also extended the need for a METOO movement to four legged animals.

He’s nuts. So is everyone surrounding him. (What else is new?)

“BUT WE’RE SPECIAL!”
The rest of us, apparently, are not.

Media refuses to allow “journalists” to unionize, but push (mainly) Democrat Party controlled unions upon everybody else…..

The Left really is all about “Do As I Say, Not As I Do.” Give them an inch, they will take a mile and tell you that they only got half an inch because the other guy stole the rest of it.

I never pay attention to the young turds.

Print and broadcast media go even further than opposing unionization by press ganging newbies fresh out of school.

Okay, they use the word “unpaid internship” in lieu of the word press gang.

Hypocrisy is irrelevant to a totalitarian and a puzzle to the useful idiots who believe the words of their leader.

The ends justify the means.

During the naturalization process, new citizens swear an oath to our Constitution. If they then work feverishly to “fundamentally transform” our system of governance and rights, doesn’t that mean they perjured themselves when they swore that oath of allegiance?

First of all, the constitution includes and protects the right to do that. An oath to uphold the constitution does not in any way mean one will not try to amend it, let alone make changes that don’t need amendments.

Second, even if someone swears an oath and goes on to do something that is inconsistent with it, that is oathbreaking, not perjury. The person would be forsworn, but would not have perjured himself.

A treasonous jerk by any other name….

It is not treason to try to change the country by constitutional means.

I imagine you’re right, but I’m just sick and tired of these people coming here and then trying to turn this country into something different. If they dislike this country so much, why don’t they just stay away, or GTF out?

Edit it down to 1 minute of his most offensive statements and there is the commercial the opposition needs to run against him.

Harvey Weinstein supported the “Me Too” movement and gave tons of cash to the democrats and now look at him. Bloomberg wants everyone to walk, while he flies private a few times a week. Cenk is like his cohorts. The progressive rules only apply to everyone else. They are the essence of hypocrisy.