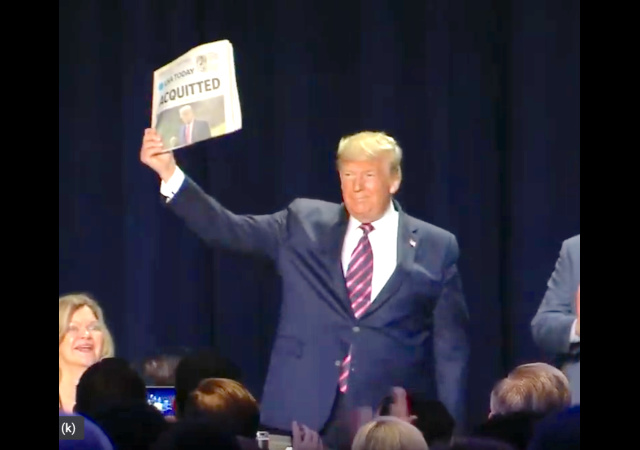 Trump held up a newspaper with the headline “Acquitted” in front of House Speaker Nancy Pelosi, D-Calif., with applause and laughter from the 3,500 guests gathered Thursday from more than 100 countries at the faith-filled event in Washington, D.C.

“When they impeach you for nothing…it’s not easy,” Trump said of loving his enemies. He began his remarks saying, “I’m working very hard for you I will tell you, and sometimes you don’t make it easy and I certainly don’t make it very easy, and I will continue that tradition if I might this morning.”

He praised Republicans, then took a seeming jab at Utah Senator Mitt Romney, “I don’t like people who use their faith as justification for doing what they know is wrong,” and a seeming hit at Pelosi, “nor do I like people who say, ‘I pray for you’ when they know that that’s not so.”

“My family, our great country, and your president have been put through a terrible ordeal by some very dishonest and corrupt people,” Trump continued. “They have done everything possible to destroy us and by so doing, very badly hurt our nation. They know what they are doing is wrong but they put themselves far ahead of our great country.”

A little cashiering of Mittens is in order here. A very public degrading/demotion ceremony removing from Mittens all his associations with the GOP. While we can’t get him to stand at attention while his insignia of rank and epaulets are ripped off the uniform by Trump, and then they and his bent sword walk on, a la Dreyfus, he can be humiliated in other ways.

I’d settle for sending his Mormon underwear through a shredder.

With, or without him wearing them?

Frankly, many of the evilest people I have known have wrapped themselves in a religious cloak. Good people lead by example, those who loudly profess themselves to be good, usually are not. Foe some reason I think that Romney falls into the big mouth covering poor character and evil intent.

I hope pressure is put on Mittens to resign. Pelosi’s sacrilege is boundless. No one believes her when she natters about her faith.

Pelosi’s faith is in stealing. She’s been doing it for decades. Her other faithnis in street goons who would do violence for her.

She’s as rancid as clinton.

In the Beltway there is a tendency for scum to rise to the top.

I left the urban corporate world in my early 40’s to marry and move to rural America – in 1998. By then it was near impossible for the company to terminate white-collar workers for incompetency and refusing to do assigned work. Consequently management took to assigning such ineffectives to every stall-mucking job possible, demanding doctors notes for all sick days, denying peak-season vacation requests, lousy seating assignments / loss of premium parking and office space, etc. Eventually they’d transfer to another job, quit or retire.

That said, I hope Romney finds himself on nothing more important than the refreshment and grounds-keeping committee. Let the people of Utah know that their boy won’t be allowed to bring home the bacon to Utah any longer – he no longer has any influence in DC. They’ll take care of him in Provo.

Well said. Neither do I.

Strongly religious and highly principled Mormon practicing Romney could not vote with fellow Republicans who were lacking said values but instead sided with Democrats who, fortunately, were richly endowed with the same high integrity and pure principles as himself.

And for that he received the Elizabeth Warren seal of approval. “Decent and honorable Romney did the right thing,” Warren said as she held one hand in the air and the other on a stack of Book of Mormons.

I checked with Brother Romney and he informs me it’s “Books of Mormons” and they are kept with “Binders full of Wimins” although some pages from each are intermingled at various times during the night.

The Mormons I know would never vote with Pelosi and her evil friends.