During a stop in Bakersfield, Trump took the opportunity to mock the leaders of the state’s anti-Trump #Resistance. 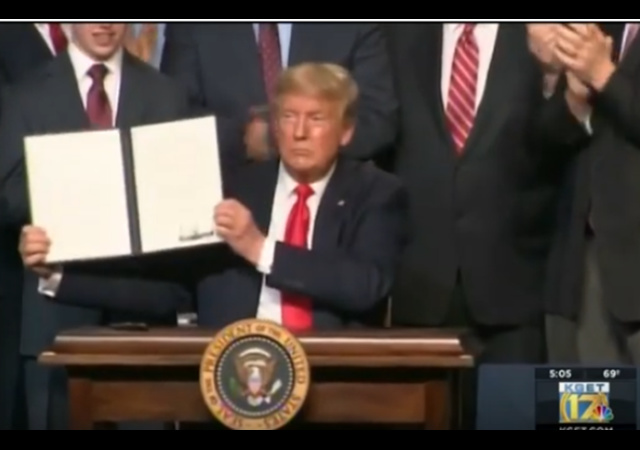 One of the most significant agenda items for California Tea Party groups has always been getting the spigot turned on again to the state’s breadbasket, the Central Valley.

Authorities diverted massive amounts of water to protect the smelt and appease eco-activists. Now, President Donald Trump has signed a memorandum directing more of the water to farmers and other agriculture interests in a prime agricultural area during a stop in the nation’s bluest state.

“For too long water authorities have flushed millions of gallons into the Pacific,” Trump said. “I ordered the administration to update outdated opinions which determined water allocation in this state.”

Trump added that he is going “to put a lot of pressure” on Newsom to enact the changes and if the California governor doesn’t follow through then “you’ll get a new governor.”

The President’s memorandum pairs with his infrastructure plans due to regulatory flexibility.

The new rules change how much water is stored in the reservoir to prevent it from running out of cold water. Ernest Conant, regional director for the U.S. Bureau of Reclamation, said the new rules will result in more cold water storage than under the current rules.

The plan would give water agencies more flexibility on how much water they can pump out of the state’s rivers. When it’s raining a lot, agencies can pump more. When it’s dry, less would be pumped.

During the stop in Bakersfield, Trump took the opportunity to mock the leaders of the state’s anti-Trump #Resistance.

After focusing on water Wednesday, Trump rolled through several of his anti-California greatest hits. He called San Francisco “worse than a slum” and said “the federal government’s going to have to step in,” apparently referring to taking action on homelessness.

He then mocked Gov. Gavin Newsom and state officials for fighting his administration on auto emissions rules and high-speed rail. Trump said a car made under his rules “would be safer because it would not be made out of papier-mache.” He also joked that state leaders would eventually shorten the San Francisco to Los Angeles line so much that “pretty soon it’ll be like a mile long,” referring to Newsom’s announcement a year ago that the state would focus on a track running from Merced to Bakersfield.

The #Resistance plans to strike back.

Critics fear the new plan, which would allow large quantities of water to be diverted from the San Francisco Bay Delta to the Central Valley in order to irrigate farmland, would ultimately harm chinook salmon and the delta smelt, a finger-sized fish that for three decades has stood in the way of the diversion.

Despite being in deep-blue California, the event drew quite a crowd.

It’s getting crowded in here as @realDonaldTrump is set to speak in a couple hours about water issues in the Central Valley #45ValleyVisit @KSEE24 @CBS47 pic.twitter.com/d08B1krlSu

It looks like Trump may be making some serious plans to purple up the Golden State in 2020!

“We can pick up 7 seats in California”
— and get rid of Pelosi !! pic.twitter.com/88MxnzwGqR

Finally, it looked like Trump may have handed the signing pen to a future POTUS!

Stilwell High Schools own Jim Mullin got to attend the signing of a water accessibility bill in California today along with many other FFA members and farmers- he also got to keep the pen President Trump used to sign the bill! #proud @CCOSA @OSSBAoklahoma @OklaEd @OFExcellence pic.twitter.com/QQluzv47at

This move is smart on Trump’s part. He can focus attention on all of California’s progressive failures as a warning about Democratic policies. The President can build up the popular vote numbers, which will add to his mandate when he is re-elected, and he contrasts himself from the urban-oriented Democratic presidential candidates.

Yeah, flushing millions of gallons of water into the ocean is such good water management. Why grow watermelon, corn, almonds, asparagus and so on when we can grow snail darters?

This Trump being a “Russian asset” thing is working out well for us. “Worse than Hitler” is exactly what this country needed.

Out here in the West of course whiskey is for drinking, and water is for fighting. In the Valley there are two supply entities–the State Water Project and the federal water project. Ninny Newsom and Bozo Becerra will try and tie the Feds up in litigation. And it’s true that a lot of the valley is owned and farmed by big corporate agriculture.

But you know I don’t much care if an almond that I eat was grown on a mega corporate farm, or on 160 acres by a struggling family farmer.

Where there’s water, food is grown. Where it is shut off by Sacramento in favor of the Delta Smelt, there’s poverty and no pears or plums.

Perfect opportunity for a Sainted and Holy Democrat District Court Judge to issue a holy encyclical (Restraining Order) and receive unwavering praise from the pantheons in the press.

This sort of common sense approach, prioritizing water for irrigation in place of pumping water into a bay to support a habitat for a bait fish is exactly why Trump will be reelected.

I may not appreciate every one of his tweets, but we should all appreciate this kind of concrete action. No president in my lifetime has done and will do more to defeat entrenched federal bureaucrats, politicians and progressive activists.

There are plenty of delta smelt to transplant to some other delta. Can we offer Egypt the smelt? How about the Mississippi delta?

What an excellent idea! There are deltas all over the world! The Mekong Delta, the Yellow River Delta, the Congo Delta …

Yes. More of this, please.

I doubt that even DJT’s mystical mind-control powers can make CA do anything sensible.

Sometimes the home team just has too many advantages.

Trump didn’t overturn the will of the people in CA. He revised an NATIONAL EPA rule. Californians had nothing to do with it and it’s been very unpopular with pretty much everyone here.

This low-hanging fruit was a brilliant stroke by Trump. Shows how wrong you “let’s give CA back to Mexico” CA haters are. CA is winnable. So how about dropping the “Californians are stupid and hopeless” comments? That is why the Republican party is known as the Stupid Party. It’s never EVER the right time to do the right thing. Even when winning is low hanging fruit.

Oh, my, my, my! Trump has gotten in the way of people who wanted farmers to go bankrupt. I guess that means that the land won’t be quite so cheap, immediately.

Crowd didn’t seem too large, hoping it grows substantially. It’d be fun to see the Cali dems wet their pants.

There are going to be a bunch of California heads exploding.

Imagine the boom in CA if a Trump became governor??

“He who smelta it, delta it”

I know it doesn’t quite work, but it’s close (smelts being shipped to other deltas) and I couldn’t resist

The preservation of species that appear to be dying out is an admirable goal.

It needs to be tempered by recognizing the cost. Particularly the cost to human beings. And the actual value of the species within the ecology.

Don’t liberals hate g-d? They shouldn’t try to emulate them then.

I’m not sure why it’s admirable. If a species has no known use for humans, what are the chances that some use will be discovered only after it’s gone, and one that can’t be derived just as well from a related and still-extant species?

What has boggled my mind over this issue—the Left firmly believes in evolution. Why wouldn’t they think the smelt would evolve to new conditions of less water?
Throw their beliefs back in their faces.

The left somehow believes that humans aren’t part of evolution and are exempt from “survival of the fittest”, as such actions we take for our survival are illegitimate if they harm another species

How about 10 gigawatts of nuclear power desalinating salt water to provide fresh water 24/7? They are on the coast of the Pacific Ocean.

Great idea. You could sell it to the Californians by convincing them that it would help mitigate rising oceans.

Great to have Pres. Trump recognize the young man from FFA! Four of my California grandchildren in high school (from two different families) are in FFA.i have really been impressed with what they learn – great leadership skills and practical information for Life. Plus, as my one granddaughter in the SF Bay Area told me, it is the only reliable place to safely find kids that share her values – conservative, Christian and willing to work hard.

Why should CA folk think they own what happens on, to, or around their land any more than Coloradans: they don’t own the water that falls on their own roof.

Aren’t there salmon in Alaska and other regions we can access and smelt in other places as said above? I can’t understand why water is cut off to a rich region for farming.

notamemberofanyorganizedpolicital | February 22, 2020 at 9:39 am