Swalwell Says Democrats Not Taking Impeachment ‘Off the Table’ Over Trump, Roger Stone

Swalwell Says Democrats Not Taking Impeachment ‘Off the Table’ Over Trump, Roger Stone 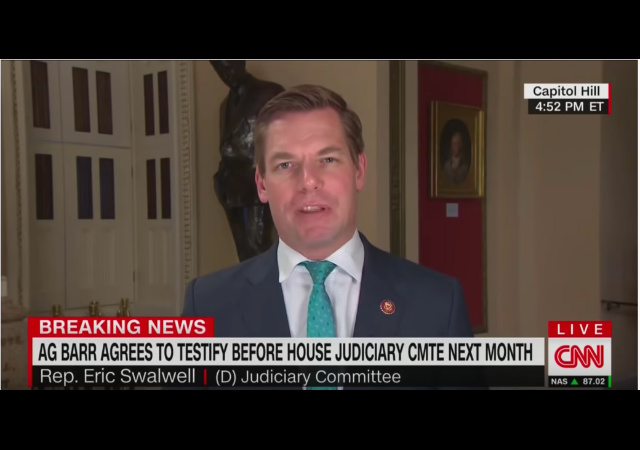 Rep. Eric Swalwell (D-CA), a man who ran for president for a second, really wants us to believe the Democrats “don’t wake up in the morning wanting to impeach” President Donald Trump.

Impeachment has come up again over the sentencing of Roger Stone.

CNN’s Jake Tapper asked Swalwell if the Democrats would impeach Trump due to his criticism of Roger Stone’s sentencing. From The Daily Wire:

SWALWELL: Yes, I’m very concerned that the independence of prosecutors, the ability of judges to just weigh the facts and the evidence is eroding, that the president’s taken a wrecking ball to that.

And he was just impeached for that. We’re not going to stop holding him accountable. We have learned, when you hold him accountable, you can actually stop the corruption, whether he’s removed or not.

And, ultimately, it’s going to be for the voters to judge in November.

TAPPER: Might you impeach him over this, over Roger Stone and the sentencing?

SWALWELL: We’re not going to take our options off table.

We don’t wake up in the morning wanting to impeach him. We want to work with him on prescription drugs, background checks and infrastructure.

They just NEVER have a “teachable moment!”

Well comrade, you will have to hold onto the House first, so that Nutty Nancy remains your leader.

The saying goes: The definition of insanity is doing the same thing over and over again and expecting a different result. These corrupt poltroons are deranged.

The jury foreman apparently had to put her name out there despite the fact that the judge actually put her name under seal.

Turns out she had a long list of antiTrump tweets, and just after Stone was indicted retweeted something mentioning him.

How she ever got on the jury I’ll never know.

notamemberofanyorganizedpolicital in reply to RodFC. | February 13, 2020 at 4:17 pm

People Discover She Has Long Been a Rabidly Anti-Trump,

Oh. This is what you are referring to then.

“How she ever got on the jury I’ll never know.”

Lets see, she lied, or whomever was screening did not do a good job.

If there is evidence she lied, then fry her.

notamemberofanyorganizedpolicital in reply to JusticeDelivered. | February 13, 2020 at 4:24 pm

Rudy Giuliani: Evidence of Corruption That DEMS in DOJ and Congress are Intentionally Ignoring….

Oh, I think the did the screening just as intended.

Mistrial. Juror misconduct or ineffective assistance of counsel, or both.

There’s no reason to think she lied. She definitely disclosed that she had run for Congress as a Democrat. So she probably disclosed her feelings about Trump too.

People who admitted bias against Stone were excused from the jury, but those with bias only against Trump were not. It was DC; if they were to exclude people who didn’t like Trump they would never have seated a jury.

Isn’t that why they invented “change of venue”?

Obama announced that Hillary didn’t do anything wrong when she was being investigated and no progressive fascist complained. What he did was interfere in an active investigation and much worse. Apparently, Obama’s prosecutors are recommending that Stone be given an extreme sentence.

Hillary is always wrong, she cannot help herself.

And then there is Obama’s “if I had a son” BS. I am sure that if he had a son he would have turned out to be a lieing, thieving, assaulting thuglet, just like thugvon.

Essentially the Dems want to impeach the chief executive for taking an active role in running the executive branch.

Trump absolutely had the authority as President to interfere in this wildly absurd and over the top sentence. He didn’t, but he could have.

In any case the officials at the DoJ had already made the decision to request a lesser sentence. There is evidence that these prosecutors lied to their superiors when they briefed them on what their sentencing recommendation was going to be, then went rogue.

I almost fell out of my lazy boy this morning when I heard Judge Nap say this very thing… and we all know how he feels about our President.

He gets his authority from where? What a sissy!

Ever meet a guy who makes you want to punch him in the face before a word even comes out of his mouth?

Rumor has it he farted again, but this one was SBD.

He should have gone to Hollywood – West Hollywood!

We’re not going to stop holding him accountable.

And Swallwell’s Boys have nukes! Or would, were we so foolish as to elect a Dem president.

OT and breaking news on WSJ Home page re Barr. Apparently he’s not a happy camper about Trump tweeting his views on the Stone case.

From the WSJ:
* AG Barr : “I think it’s time to stop the tweeting about Department of Justice criminal cases” — ABC Interview

*Barr: Trump ‘has never asked me to do anything in a criminal case’

*Barr: Public statements and tweets ‘make it impossible for me to do my job’

I fully understand why Barr is irritated; he is a prosecutor, and very conscious of the rules about prosecutors making public comments about cases.

To him, the President presents a whiff of impropriety any time he tweets about a case. Others have told him that those tweets mean the President is pushing for a particular result, rather than justice, and part of him agrees with that, even though he specifically says the President has never asked him to do anything about a specific case.

He has a point.

But the President has other responsibilities, namely to us. His tweets are how he reports to us on the issues of the day.

On the whole, and in an imperfect world, I’d rather have the tweets.

Is essence, Barr is just venting a bit about his boss making his job more difficult than he feels it needs to be. Fairly common experience. Dems + media will try to make hay of it but pay it no mind, that’s them just trying to find/do anything to hurt Trump. Barr and Trump will likely talk to one another about this in the next couple of days and work something out and this will blow over.

All 4 lawyers the bailed were either regime members or Coup members. Flynn’s lawyers fit here as well.

Who cares? The communist democrat party is out of ammo. They wasted it all on the game impeachment nonsense. They will be out looking for greeters jobs at Wal-Mart in less than a year!

If Trump isn’t impeached every 30 days he’s not doing his job.

Trump’s been taking slander for four years now, Barr for less than a year. I’m glad it’s Trump that is President.

So that’s what the Ds mean when they claim Trump is impeached “forever” – they mean “continually.”

D’s: We just had a request to play Impeach Trump…!

Crowd: You just played that song !!!!

D’s: Yeah, I know…but we had a request to do it again.

I’m surprised he didn’t go for the twofer- let out a big belch.

I’m surprised Legal Insurrection didn’t have a thread on the Roger Stonr jury foreman’s history of anti-Trump tweets today. This was a major story on most conservative blogs today.

Get real, txvet2….It doesn’t make a bit of difference what Trump does….

The MSM…The Dems…and the Never Trumpers will shit themselves for about three days…then…it’s on to….
THE NEXT BIG FUCKIN’ DEAL !!!!!!!!!

(Haven’t you noticed the pattern ???)

It makes a difference when it makes things more difficult for his own staff. His muddying the waters only gives his enemies more ammunition.

A man of unusual intestinal fortitude and a DIM intelligence.