Captain Mike Eruzione: “If we knew we were going to piss off this many people, we probably would not have put the hats on. That’s the big question here. A lot of the stuff I got was, ‘You guys said it’s not political, but when you put the hats on, you made it political.’ “ 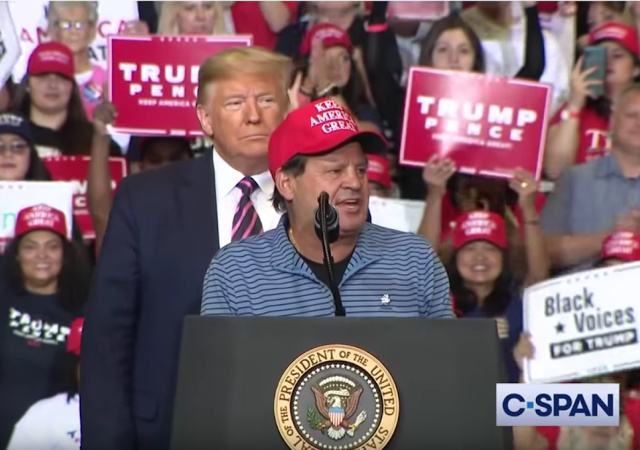 Members of the 1980 “Miracle on Ice” hockey team have faced backlash and criticism after they attended a rally for President Donald Trump and wearing MAGA hats.

The team initially was invited to be in a separate photo line with the president at last week’s rally, but they later appeared onstage, according to The Washington Post, with many wearing the hats.

Trump had invited team captain Mike Eruzione, 65, along with other players to celebrate the 40th anniversary of the “Miracle on Ice” game in which they beat the four-time defending gold medalist Soviet Union team and later won the gold medal for the U.S.

Eruzione said he didn’t know he would be introduced onstage or offered one of the Trump hats. Four former team members did not wear the hats, while 10 others did, according to the Post.

Eruzione, who is director of special outreach at his alma mater, Boston University, said he has received angry calls and messages on social media about wearing the hat.

“If we knew we were going to piss off this many people, we probably would not have put the hats on,” said Eruzione. “That’s the big question here. A lot of the stuff I got was, ‘You guys said it’s not political, but when you put the hats on, you made it political.’ “

“The 1980 Olympic hockey team reminds us of a time when as a nation we came together to defeat communism. It is a shame that today’s liberals are so intolerant of other political viewpoints that they threaten to cancel such great sports heroes from our history.”

That means the country is 5% more racist now. Or something.

OMG. Is that all you got? Trump’s a racist?!?!? I’m chuckling still. Your types are so predictably puerile. Tell me what you said was in jest.

I read it again. It was in jest. Thanks.

“You guys said it’s not political, but when you put the hats on, you made it political.’“

A Trump rally ain’t political – it’s THE HAT. Got it.

The left is fighting a war against freedom. Their stupid arguments are just cover.

Seems he has perhaps been hit in the had with a stick or puck too many times now. Good grief, what logic. Or, he’s joined the apology crusade?

Tolerance as defined by the left = You submit to my control and I can do whatever I want to anybody.

Perhaps much of the backlash is bots or just a few with the media connections? Never trust a leftist.

notamemberofanyorganizedpolicital in reply to TX-rifraph. | February 26, 2020 at 4:35 pm

I put these media attacks in the same category as this one.

I was a BU student back then and went to all of the hockey games. BU was national champ twice. The “Miracle on Ice” was right up there with the greatest sports moments in my life. I love everything about it and will never get tired of watching the movies about it. It was a magic time.

It was a magic time, and a magic event. In a way somewhat similar to Secretariat and his Belmont Stakes win. Wonderful times.

And then came AOC.

I just shrug my shoulders anymore at the dumb that is leftism. Who cares what the dimwits think?

Cant have someone supporting America and proud to be an American – that is un-american.

To the Left….all is politics. In retrospect, a red, white and blue cap with “USA” would have been killer. But to declare stupidity to excuse wearing a MAGA hat is lame. Yes, the hat is political but what ticks off the Left is America renewing greatness. The present Dem candidates are more in the Soviet corner than US these days. Winning and beating the Soviets is now unfair?

notamemberofanyorganizedpolicital in reply to alaskabob. | February 26, 2020 at 4:46 pm

Yes, DEMS in the Russian Corner.

This obsession of the left and the MSM in particular of seeking revenge on Trump supporters is a little more than strange. It smacks of a collective mental illness.

Actually, it smacks of a fascist movement.

notamemberofanyorganizedpolicital in reply to puhiawa. | February 26, 2020 at 4:43 pm

Why does “Keep America Great” have to be political and controversial? Shouldn’t every American want America to be great?

The difference between obama and Trump’s treatment is that those of us who absolutely hated obama never made public spectacles of our hatred for him. In today’s world, all we see is hatred for Trump. I quietly stopped going to any movie that had obama worshipers in it but I didn’t publicly protest his term in office. The public hatred for Trump isn’t nearly as strong as the msm would have us believe. Just like on Twitter, 72% of all tweets come from 6% of the members and they are almost all anti-Trump.

To publicly decry Obama was to automatically be labeled a racist. These are the roots of a fascist movement, and liberals are now proud of saying things like “some viewpoints should not be respected but squashed.” This is now considered a fight for good and evil to them, not unlike the religious zealotry that they espouse as evil.

I’ve seen and heard these things often from more than one of them, and they fail to recognize the hypocrisy, arrogance, and imminent danger of such escalations towards a civil war.

notamemberofanyorganizedpolicital in reply to healthguyfsu. | February 26, 2020 at 4:42 pm

Remember Joe the Plumber and how the Obama DEMS ruined his life afterwards?

Who cares how many people are pissed off? Basing your life on what other people think is really dumb.

notamemberofanyorganizedpolicital in reply to Firewatch. | February 26, 2020 at 4:40 pm

You can judge the quality of a human – in part – the the people
they P.O.

It was indeed a magical time, right up there with 2016.

Backlash from who? -People that bare them no good will anyway? A corrupt media?

Such’bad will’ has become a badge of honor.

notamemberofanyorganizedpolicital in reply to TheFineReport.com. | February 26, 2020 at 4:39 pm

All the Leftist America Haters who were
Already Taking a Knee during the National Anthem…….

“The hat made it political” is the same idiocy as “the car drove off the highway” or “the gun killed that person”. Giving agency to inanimate objects is just more Lefty blame-shifting. They cannot – they will not! – accept responsibility for anything they do.