“We Want Our Island Back.” 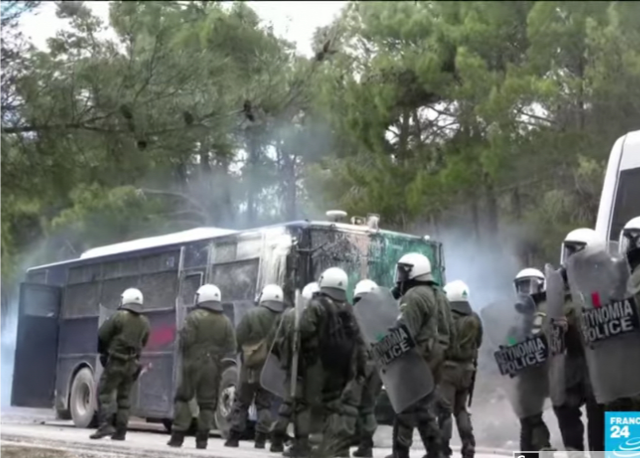 Greek islanders clashed with police for the third day on Thursday over their government’s plan to build more migrant camps on their islands.

The protests mainly happened on the Greek islands of Lesbos and Chios, which have witnessed an unabated flow of migrants from the Middle East since the Migrant Crisis unfolded in 2015. Similar clashes on Wednesday left 60 people injured.

The protests erupted after Athens secretly shipped building material for the facilities despite widespread local opposition, media reports said. An estimated 50,000 migrants are currently camped in the Greek Islands, mainly Samos, Kos, Leros, Lesbos, and Chios. Residents of these islands have witnessed a rise of violence and crime since the migrant inflow began five years ago. Abandoned by their national government and the EU, they have taken to streets in their thousands, demanding “We Want Our Island Back.”

The Radio France International reported on the ongoing unrest in the Greek islands:

More than 1,000 people rallied on the Greek island of Lesbos on Thursday to protest against new migrant camps, a day after violent clashes left more than 60 injured, mostly police officers.

Lesbos businesses and unions called for a general strike on the island to continue, with shops shuttered for the second day in a row.

Wednesday saw violent clashes over the construction of new migrant camps on the islands of Lesbos and Chios, over the fierce opposition of local residents, with hundreds of angry islanders throwing stones at police who responded with tear gas, stun grenades and rubber bullets.

Late Wednesday, the Greek government said that hundreds of anti-riot police who had deployed to the islands to ensure the construction work could continue were leaving. (…)

“Forty-three officers were injured slightly on Lesbos on Wednesday… but they are not in any danger,” the spokesman said. Three had foot injuries from rifles fired by local residents, he said.

After weeks of fruitless talks with island officials on where to build the new facilities, the government had on Monday secretly shipped construction machinery and hundreds of riot police to Lesbos and Chios, causing outrage.

The surging migrant wave is a breach of the 2016 EU-Turkey pact engineered by German Chancellor Angela Merkel. Under the deal, Brussels pledged billions of euros in return if Turkish President Recep Tayyip Erdoğan vowed to stem the migrant wave flowing over from Turkey. Chancellor Merkel also agreed to fly in between 150,000 and 250,000 migrants from Turkish camps directly, German newspaper Die Welt disclosed in 2017. Merkel’s dream of settling hundreds and thousands of migrants across the EU failed in the face of still opposition from the Eastern European member states, thanks mainly to the efforts of Hungary’s Viktor Orbán.

The unfolding crisis in Greece is the result of the national government’s failure to secure its borders and the EU’s insistence on open borders for immigrants. The government in Athens, financially dependent on the EU since the 2008 Monetary Crisis, has shown little resistance to the wave of migrants from the Middle East overrunning the islands along the Turkish border.

“There is no alternative plan,” Greek government spokesman Stelios Petsas said, admitting failure on the national television. “We have done everything to increase the returns,” he explained, pointing to the failing EU-Turkey deal, which promises the repatriation of illegals.

With the EU-Turkey deal in tatters, migrants have again started swarming on to Greek Islands. The island of Lesbos, just 10 kilometers from the Turkish coastline, is housing about 20,000 migrants. The migrant camp on the island has turned into a hotbed for crime and violence, with migrants regularly clashing with the police and security forces. “The so-called “jungle,” the newest part of the camp, sprang up just a few weeks ago and is growing like wildfire,” German state broadcaster Deutsche Welle reported last month.

With migrants overrunning the islands, the tourism sector has taken a big hit. The migration crisis has already shattered economies of these islands, “with the business of many hotels and restaurants falling off by more than 50% in recent years,” the Voice of America reported last week.

Those migrants should start dying in large numbers, until they decide they don’t want to be there.

notamemberofanyorganizedpolicital in reply to JusticeDelivered. | February 27, 2020 at 1:51 pm

JusticeDelivered in reply to notamemberofanyorganizedpolicital. | February 27, 2020 at 4:59 pm

how about Africa, I bet that China Coronavirus 2019 makes AIDs look like child’s play in Africa.

A wicked solution is one choice. Let’s set that aside for now. A better solution is emigration reform to mitigate progress at both ends of the bridge and throughout. Immigration should not exceed the rate of assimilation and integration before planned parenthood. We should also curb social justice anywhere is injustice everywhere, diversity (i.e. color judgment including racism, sexism) breeds adversity, and a virulent anti-nativist contagion that has made great progress over a multi-decadal period.

Greeks lost their freedoms when they demanded all kinds of free stuff from their government. I don’t sympathize with them one bit (unless they are opposed to taking all these entitlements, which you won’t find many if any that are).

notamemberofanyorganizedpolicital in reply to healthguyfsu. | February 27, 2020 at 1:52 pm

Yes. They got Free Slave Chains.

Side Note: Last year some commentator pointed out that you
cell phone/smart phone is nothing more than a
prisoner’s ankle bracelet.

Freeshitonomics is a magnet for shitholers, and weakens the native stock.

Does any people have the right to determine who lives within the putative boundaries of their country or territory.

The establishment then sends forth men with guns to make us endure the ruin of our own countries.

Even in America this happens. Our republic is a grand failure on this.

I tire so of being told how I mustn’t discriminate against illegal foreigners or cause them any discomfort — all while they STEAL $$ from the government and kill and maim Americans.

Frankly, I tire of this fake republic with its fake freedom but very real indentured servitude to illegal aliens and other foreigners.

notamemberofanyorganizedpolicital in reply to Close The Fed. | February 27, 2020 at 1:54 pm

Hate to have to agree on those points, but spot on.

First we start by closing the Federal Reserve, then we shrink government to at least 1/10th its current size, then….

Close The Fed in reply to notamemberofanyorganizedpolicital. | February 27, 2020 at 2:38 pm

Nota, the entire problem is we have NO power to change anything.

We elect Trump, who’s wobbly on illegal aliens anyway (likes Daca, said it during the campaign, don’t fool yourself), and with the deep state coup attempt and the media’s constant negative barrage, he can’t even accomplish the little bit he wants to accomplish, like the wall.

We have a constitution that states the fed. govt. is responsible to protect us from invasion; it refuses.

We have courts that have had subject matter jurisdiction removed from them; they exercise it anyway.

We elect people like Gov. Brian kemp who claims he’ll work actively to rid us of illegal aliens, who, upon election, COMPLETELY forgets this promise.

We simply have no control over anything anymore. We have to obey, no matter how many lies they tell us or how many oaths they flauntingly disobey, or they bring men with guns to take us away.

We fought a war against G.B., only to be enslaved by our “elected” officials, who have manufactured a monopoly of only two parties, so that a third choice may never arise.

This fake freedom offends me, these two parties offend me, and this deliberate destruction of a great way of life by those insulated from it, enrages me.

Also, re: the two-party monopoly:

Notice that in G.B. (unsure if my terminology here is correct), Nigel Farage was able to create a new party and win national elections in mere MONTHS.

We haven’t had a new party with any national wins in over 100 years.

The two major parties have locked up the ballots so that new parties face such huge hurdles that you have to go with dem or gop to have a prayer; thus Ron Paul ran for House as a goper.

So, I hear gop voters saying the dems are going to be dead. This is NOT a good thing. That means gop nominees will have no one to face in general elections. And face it, hardly anyone votes in primaries.

And even facing dems in general elections, they’re useless because they’re anti-American, so you still have NO REAL choice.

The parties are such selfish instruments, it makes me sick.

Thus, you are STUCK.

If elected officials REALLY cared about America, they would basically dismantle the barriers to the ballot in America.

“…they bring men with guns to take us away.”

Because there are too few of use who say enough is enough. The gubmint would arrest 1,000 or 10,000 “miscreants”. They would quake in their boots at 10,000,000. It’s going to take an absolutely massive protest – Hong Kong style where 26% of the population turned out – to implement any change. And unfortunately, I don’t see that happening.

People want to make a living and not be hassled.

Perfectly understandable, and you are perfectly right.

“Does any people have the right to determine who lives within the putative boundaries of their country or territory.”

Invasion, even when invaders are not armed, is an act of war.

The Greek people know how to spot a Trojan Horse when the governmental horses’ rear ends want to foist one upon them.

These are invaders not immigrants. Erdogan makes no secret of his desire to conquer Europe, Merkel and friends are either fools for disbelieving him or knowingly complicit in it.