“What a vile piece of garbage you are, Susan Collins. … I sure hope you didn’t breed.” 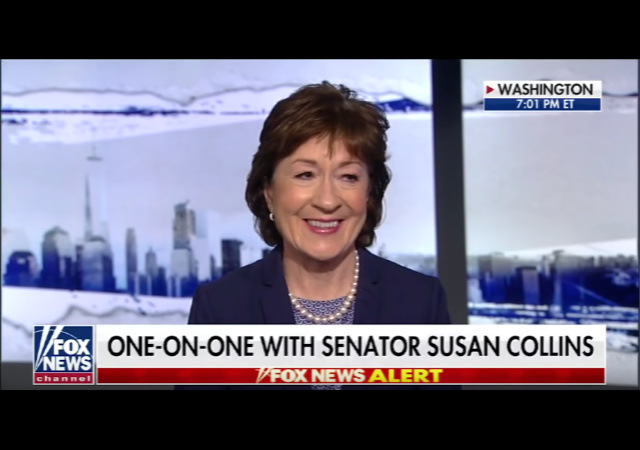 Sen. Susan Collins (R-ME) said the FBI began an investigation into death threats she has received due to her vote to acquit President Donald Trump in the impeachment trial.

Collins made the announcement when she spoke to the Maine Chiefs of Police Association. She said the FBI identified three credible death threats to investigate.

“Wow. What a vile piece of garbage you are, Susan Collins. … I sure hope you didn’t breed,” one voicemail said. “I sure hope you don’t have children or grandchildren because their future is [expletive].”

“You are a traitor traitor that you support people like Vladimir Putin and Donald Trump,” it continued.

Collins, her family, and her staff received similar phone calls after she voted to confirm now-Supreme Court Justice Brett Kavanaugh:

“This is a continuation of the kind of abuse and harassment that has occurred for my staff, my family and me since my vote for Justice [Brett] Kavanaugh,” Collins responded on “The Story With Martha MacCallum.”

“And I think it’s a sad commentary that we can’t have differences of opinion without resorting to profanity to death threats to vile language,” she added. “And yet it seems we lost the ability in this country to disagree respectfully.”

Collins said on the Senate floor last week that she did “not believe that the House has met its burden of showing that the president’s conduct, however flawed, warrants the extreme step of immediate removal from office.”

It seems these people forget she voted to acquit President Bill Clinton in 1999:

“This decision is not about whether you like or dislike this president, or agree with or oppose his policies,” she said. “Rather it is about whether the charges meet the very high constitutional standard of treason, bribery or other high crimes or misdemeanors.” She said Mr. Trump’s actions didn’t meet that threshold.

Mitt’s cave brought the pressure on the fringe Senators to a fever pitch. I’m still convinced 2-3 Dems were going to vote to acquit right up to that point

They were. Manchin and Sinema for sure were going to vote to acquit. They weren’t going to walk the plank for Schiff.

But THE SECOND Romney gave them the ‘bipartisan’ seal of approval their permission to vote against The Party was revoked.

I’ve said it for years. So-called ‘moderates’ will never, EVER vote against The Party when their vote matters. Manchin waited until he was absolutely certain that his vote would not matter on Kavanaugh before finally voting.

notamemberofanyorganizedpolicital in reply to Olinser. | February 10, 2020 at 4:11 pm

We all noticed that Nancy could not get the votes for any form of high crime or misdemeanor, including bribery. That is exactly as far as the courage of the moderate Democrats in the House went. Trump wasn’t even guilty of either abuse of power or obstruction of Congress.

Trump acted within his authority, and according to his responsibility under the anti-crime treaty with Ukraine. He resisted illegitimate purported subpoenas where he had the responsibility to protect presidential privilege, as he certainly should. Congress could have asked the SCOTUS to resolve the issue, but they did not.

Death threats, from “D
*Demoncrat cowards? { Who cares} These ignorant Libretards, are exactly that! I wonder what these Trump derangement syndromes= people, thought about Hillary, & Slick perverted Willie, taking hundreds of Millions of $’s, from Putin & his “Comrades”? { Hello….Libretards….get it right!}

Liberals have a severe mental disorder, called: lack of patriotism, & common sense! They have been suffering from that since birth!

it appears as though this is aterminal illness?

Well, it might help a tiny bit if she wasn’t such a perpetual tease. Her whole Agony in the Garden act is just infuriating to all parties. Lead them on, then let them down; of course somebody’s going to be peeved.

I’m no pro but this strikes me as pretty crappy politics. When a question is bloody obvious, stop pretending it’s all Agony in the Garden; shut up and vote the way your job demands that you do. The way she does it just pisses off everybody.

She constantly pisses me off. Get off the fence Susan an pull the splinters out of your butt.

notamemberofanyorganizedpolicital in reply to tom_swift. | February 10, 2020 at 4:13 pm

Oh, Collins must mean Pelosi gave her a dirty look…..

Johnny Rebellion in reply to notamemberofanyorganizedpolicital. | February 11, 2020 at 9:31 am

If Satan himself woke up in the middle of the night and saw Nancy Pelosi’s face,he would die of a heart attack.

Where are the death threats? With the FBI, where they belong. Of course you don’t see them — she hasn’t made them public. But she says the FBI identified three of them as true threats and is investigating them.

and we all know the outcome of those “investigations”…

we are no longer a nation of laws, and i have zero faith in all branches of the DOJ.

the entire apparatus is corrupt, from top to bottom: senior leadership, supervisors, field & office staff, judges, clerks, etc. villainous scum one and all, either by acts of commission, or those of omission.

That’s just not true. The track record of such investigations is pretty good. They identify the person who made the threat, and if the facts justify charges they bring them.

We have the greatest investigative services in the world (the gross corruption at the FBI, CIA and IRS aside). Find the callers and prosecute them.

Nothing to prosecute them for — no death threats, as far as the quotes show. We are still allowed to call our politicians and call them nasty names!

Indeed we are, but we can’t make true threats, against anyone. The FBI has identified three threats, and is investigating them. When the threateners are found, they will be prosecuted.

It happens all the time. When has it not, to your knowledge?

From your comment, one can conclude that at one time you bought said bridge, and are now wanting to unload it. Which leads a logical mind to conclude that you learned something, but are keeping it close to your vest. Also, perhaps the long laugh indicates an appreciation of self-deprecation. Which would be quite appropriate

re:”Sen. Susan Collins (R-ME) said the FBI began an investigation into death threats she has received due to her vote to acquit President Donald Trump in the impeachment trial.”

My guess is that it could be someone from the FBI is the one calling her with ‘Death Threats’. They have no love for President Trump.

notamemberofanyorganizedpolicital in reply to C. Lashown. | February 10, 2020 at 4:13 pm

Not a fan of Senator Susan Collins, but the lunatic fringe has got to be somewhat frightening for those in the limelight. I only wish I had the protection detail afforded these elites so I can leave my enumerated rights at home 😉

Another day in Paradise.

We’ll soon find out that the number of the caller is traced to someone named Pierre Delicto.

notamemberofanyorganizedpolicital in reply to TheFineReport.com. | February 10, 2020 at 4:15 pm

healthguyfsu in reply to notamemberofanyorganizedpolicital. | February 10, 2020 at 7:15 pm

The Pierre Delecto scandal is what made me laugh about Romney’s little sermon about telling his family blah blah blah.

What are you going to say about the twitter handle, Mittens?

The Democrats already targeted her money wise. This is an attempt to try to get her out of the race.

notamemberofanyorganizedpolicital in reply to puhiawa. | February 10, 2020 at 6:21 pm

The DNC is basically broke from my understanding.

So is this Mini Mike Doomberg’s money?

JusticeDelivered in reply to notamemberofanyorganizedpolicital. | February 10, 2020 at 7:47 pm

Personally, I think that he also should be referred to as Pipsqueak Mike, at least some of the time.

She was going to get threats no matter which way she voted. Self inflicted ones.

When you act like a Flake, you end up being burned like a flake. So far, she is the only I’ve heard of getting these threats over that vote. Of course politicians get threats all the time, this is nothing new since the early days of our republic.
The thing is, she waffles all the time. When it comes to vote on most issues which Republicans feels are important she panders to her inner leftist, she courts them, and far too often goes against Republican desires.
This isn’t right, by any means, and if there are credible threats to her they should be prosecuted, but this is also a case of reaping what she has sown.
I have almost as little respect for her that I do for Mittens, they act the way they do in their self importance, for for their petty views, not for principle.
At least she put on her big girl pants, unlike Mittens, and voted for the constitutional principle over pandering or for petty revenge.

The President was authorized to ask for an investigation under the Treaty With Ukraine On Mutual Legal Assistance in Criminal Matters, signed and ratified in 1999 and still valid. Nobody on his legal team referred to the Treaty in testimony, unless I missed it. I do not understand why this key piece of exculpatory information was ignored.

In any event, Trump’s request that Zelensky “look into” the behavior of two Americans doing business in Ukraine was absolutely legal. Joe Biden’s candidacy for the office of president does not confer immunity on him for criminal investigation and Hunter Biden is a private citizen, therefore fair game.

There was no crime committed by Trump, not even an ethical misstep. Romney has investments in Ukraine and is covering his own hide. Collins’ tortured hand-wringing was ridiculous. She knew she would have to acquit.

whats really hard to believe is snowe was the better of the 2 female senators from maine.

did she get them?
probably.
has she always been a drama queen?
anyone whose lived here knows she is.