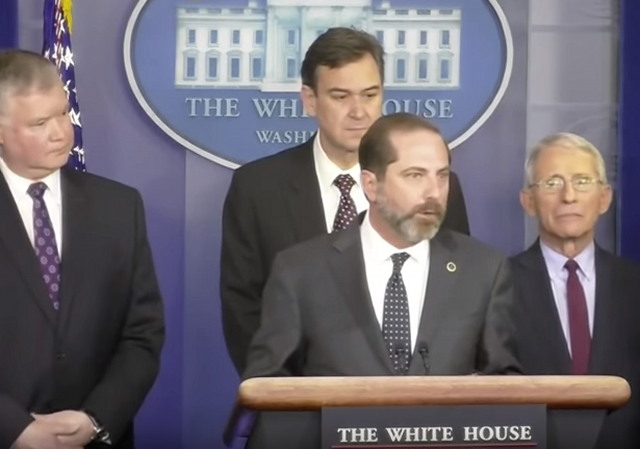 You may have thought that the Coronavirus is serious because people are sick and dying from it, but CNN has found a much more problematic angle to the story. It seems the people who make up Trump’s task force to fight the disease aren’t very diverse.

It’s getting harder and harder to tell the liberal media apart from parody sites like the Babylon Bee:

From the story by Brandon Tensley:

It’s a statement that’s as predictable as it is infuriating: President Donald Trump’s administration lacks diversity.

On Tuesday, Trump tweeted photos of a briefing he’d received on the new coronavirus spreading out of China.

“We will continue to monitor the ongoing developments,” the President said in his post. “We have the best experts anywhere in the world, and they are on top of it 24/7!”

Who are these experts? They’re largely the same sorts of white men (and a couple women on the sidelines) who’ve dominated the Trump administration from the very beginning.

By contrast, former President Barack Obama’s circle of advisers in the face of the 2014 Ebola outbreak in West Africa was hardly so monochromatic. Neither was it so abysmal in terms of gender diversity. (Of course, to contextualize, Obama’s administration, on the whole, was far more diverse than Trump’s.)

Never underestimate CNN’s ability to find fault with anything Trump does. You really have to wonder how these people take themselves seriously.

There might be some bigger concerns related to Coronavirus than whether there are sufficient people of certain races or genders in a particular picture… https://t.co/genBiVYjK3

The greatest day we’ll ever see is when we see CNN closing it’s doors. True enemy of the people.

This needs to be fixed immediately.

When I lay dying of bat soup fever, I want to be able to say that the task force may not have been the most qualified, but goddamn they were a diverse bunch.

Just when you think the news media has hit peak dumb, they manage to top themselves.

Me, dying of a new plague in the back of ambulance rushing me to hospital: “Wait, stop this car. Was the task force convened to fight this contagion representative of all groups from the community at large? If not let me out right now.”

Have you see the 100% absolute lack of diversity at CNN?

“Have you see the 100% absolute lack of diversity at CNN?”

On the other hand, there are a lot of dummies who have common sense, and who are loyal to the Constitution and their fellow citizens, and who don’t take bribes to commit treason.

Thank goodness Wuhan Virus is an equal opportunity pathogen or I’d denounce it on Twitter.

notamemberofanyorganizedpolicital in reply to Tiki. | February 1, 2020 at 2:26 pm

Can’t we send all our Media-Complex over there to cover it?

JOHN B in reply to notamemberofanyorganizedpolicital. | February 1, 2020 at 8:15 pm

A few months back, CNN et al kept hoping/rooting for a recession – just so they could blame President Trump. Who cares if millions of people lose their job if it helps our agenda?

In a few days, after the impeachment is over, CNN and the other media will start hoping that Americans die from the virus –just so they can blame President Trump. Who cares if people are dying, if it helps our agenda?

These people are sick.

CNN’s motto: “Give us diversity, or give all of you death!”

If that’s their motto, they’re full of crap. Their real mission – ordered upon them by thei swamp/leftist/islamic handlers – is to divide so their handlers can conquer.

What a mess george soros and minions have left this nation in.

The US will never survive as 50 states (57, if you’re obama). Perhaps, at this point, it is a good idea for us to part ways, and thrive as a Constitutional republic, while what’s left behind ‘thrives’ as a banana republic. So long as their is a tall wall between our new nation and what we leave behind.

From the Babylon Bee:
CNN Criticizes D-Day Soldiers for Lack of Diversity.

“Doc, before you pick up that scalpel, which do you think is more important, competence or diversity?”

Doc: “It depends on whether you want me to cut you or shave with it.”

What would be incredibly funny is if members of Congress thought that carriers had been roaming the halls. Then they would be more interested in the virus than Trump.

notamemberofanyorganizedpolicital in reply to JusticeDelivered. | February 1, 2020 at 2:32 pm

Well there were all those Communist Chinese Lobbyists roaming and chucking money about at the Congress Critters this week…..

Their first thought would be how to blame Trump.

PDJT will be laughing all the way to the swearing in, January 2021.

Ben Carson has been touring the country on this issue and I’ve heard him interviewed at least twice. Doesn’t he count? Is staffing everything by The Village People a good idea? How many Super Bowls would they win if that was the selection criteria? Do we want to solve problems or is being diversified the solution to everything now?

So what if they look like the Democrat presidential field?

notamemberofanyorganizedpolicital in reply to Pasadena Phil. | February 1, 2020 at 2:48 pm

You really think these idiots are genuine in their call for ‘diversity’ to stop a virus?

Affirmative action actually works backwards, in this regard.

I mean, imagine an obama put in charge of a coronavirus taskfore. We’d all be dead.

We saw what happened with ebola back in 2014 or so when Obama was running the show. BHO et al refused to ban travel and the CDC publicly stated that ebola cases could he handled even by hospitals that were not specialized, high risk facilities. So the CDC either bent the opinion and statements to the policy choices from the WH, or the CDC was really, really negligent and wrong.

Either way, no one in the CDC or the White House was ever properly held accountable for that cock-up.

The Counterfeit News Network has moved most of its production and personnel from Atlanta to NYC over the years. I wish it would move the rest and relieve us of this pox.

Stop watching it. Stop repeating what they say.

It’s the only power they have. And our side seems intent on facilitating that power. It’s very stupid.

It’s a funny thing, but I never see CNN or the other repeater stations of the DNC-CPUSA showing footage of a basketball game and proclaiming horror at the lack of diversity on the court.

I want the best and the brightest not a box of crayons. I don’t care if its science officer Spock.

CNN experts: To stop the spread of the Wuhan virus, kill all the carrier pigeons.

Give them what they want… as long as they have to live it… no more “white” developed law, medicine, science, business, and industry.

smh… It seems I have been shaking my head a lot. It is a good thing that I have a thick neck otherwise my head would probably fall off. How did we get here? The lunatics are everywhere. smh…

“Bat Soup Fever” made my day. I predict that in another 48 hours that label will be everywhere.

Maybe there is a song in that somewhere

Every time I read a piece about cnn I think the headlines should read, “You can’t make this stuff up”! They literally have the stupidest people on earth working there. msnbc is right behind them on stupid!

the VIRUS doesn’t seem to discriminate–it kills humans without regard to color/religion/sexual orientation, etc–don’t care if the best of the best are green/purple/even orange–if they can do the job is all that matters

btw, screw cnn, msnbc–their ilk need to travel to wuhan in person–you know, embed themselves for a first-hand report on the situation–who knows? they might even die there

Skilled Tradesmen vs Journalists – Who is Smarter?

So if not enough poeple of color die from the coronavirus, do they advocate killing some of them to make up the numbers?

2. Robert O’Brien, Assistant to the President for National Security Affairs

3. Dr. Robert Redfield, Director of the Centers for Disease Control and Prevention

7. Joel Szabat, Acting Under Secretary for Policy, Department of Transportation

9. Rob Blair, Assistant to the President and Senior Advisor to the Chief of Staff

10. Joseph Grogan, Assistant to the President and Director of the Domestic Policy Council

11. Christopher Liddell, Assistant to the President and Deputy Chief of Staff for Policy Coordination

One is diverse (i.e. individual dignity). At last count, there were 12 people. 12 unPlanned persons. Thanks, mom.

It’s not about “diversity.” It’s just about poisoning the minds of the electorate so sieze power over the rest of us.

Because people who need saving generally look at their savior’s skin color before accepting their lifesaving offer.

Too often, the ‘savoir’ is the one who put them in their misery.

How many hospitals has the members of the black congressional caucus or the muslim community built in American?

Compare to the astounding number of hospitals Jews and Christians have built.

Rashida tlaib, omar, cortez, obama and the like: they build nothing, but are complete parasites destroying all good that was created.

Oh yeah, another thing: after 30 years in public life and glamming onto everyone’s money, name ONE thing hillary clinton has built. One?

A sterling reputation for lying, corruption, and overconfidence.

How Much you want to bet these lefties have never saved someone else’s life?

PDJT should amend his terrible racist ways by sending ilhan omar, rashida tlaib, ayanna pressley, aoc, nancy pelosi, jeffries, nadler, adam and a few others to Wuhan to do an in depth, close up study of the coronavirus.
I’m sure they’d all be proud to do their part to help humankind find a solution to the problem as a diverse group.

My Japanese wife was shopping in the supermarket as I waited in the car. She was sick last week and still has a terrible cough. When she came out pushing the shopping cart she looked grumpy. She said, “Everybody hates coughing Asians!”

I told her to cover her eyes when she coughs. 🙂

Wish I would have come up with this from a tweet.

“When I lay dying of bat soup fever, I want to be able to say that the task force may not have been the most qualified, but goddamn they were a diverse bunch.”

Kill whitey before he kills the virus!!

Oh come on CNN–there was a “trannie” in on this at the start. A “transspecies virus” jumped from a gay snake or lesbian bat in a Wuhan “wet market”. So you’ve got some diversity there.

I can see it now:
An American scientist creates an antidote for the Caronavirus, CNN books an interview:
CNN – We’ll get to your amazing achievement in a minute Doctor, but we have to ask you first – who did you vote for in the 2016 election?

Hamilton,
In Ayn Rand’s short novel, Anthem, the protagonist rediscovers electricity and reinvents the light bulb but since he did it alone his work must be destroyed.