Other than that Mrs. Lincoln, how was the play? 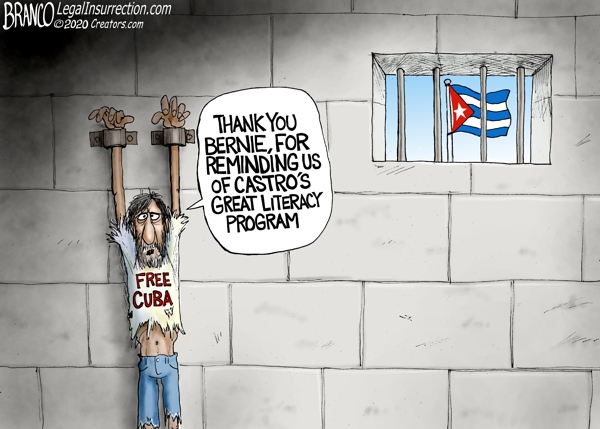 Teach the citizens to read, so they can read the propaganda you provide.

There is a small flicker of hope for Cuba,, it is called Capitalism. I saw it myself… I saw Bernie myself, just yesterday, here in Myrtle Beach. He is fooling people, completely. SMH. TY MR. B…

Haft to point this out. But, if we can’t teach our children from the Holy Bible, are we really free ourselves?

Nobody prevents you from teaching your children from any book you like.

Last year, my son’s 6th grade class was denied access to considering multiple high quality team building programs here in the DFW area because the owners of the programs were Christians, even though those programs didn’t mention their faith once when providing a team building experience.

So, how did my son’s public school know? If on their business’ website, somewhere in either their respective bios or in a mission statement, or even buried deep in their webpage, if they cited or alluded to just a single Holy Scripture as a motivating value or a source of personal inspiration, they were disqualified.

Democrats want a candidate who supports abortion on demand, infanticide, open borders, free health care for illegals, gun confiscation, the Green New Deal, confiscatory taxation, loves Mao, Stalin, Castro, tranny conversions for nine year-olds, perpetual race-baiting but who opposes Christians, Jews and their God and Israel, and who uncritically support Muslims in the practice of their ludicrous and murderous Islam. You know, someone like that.

But they won’t accept Bernie as the nomination because he admits to all of that.

And they kickass at baseball

How come Bernie didn’t mention that?

Is it because it’s an American game?