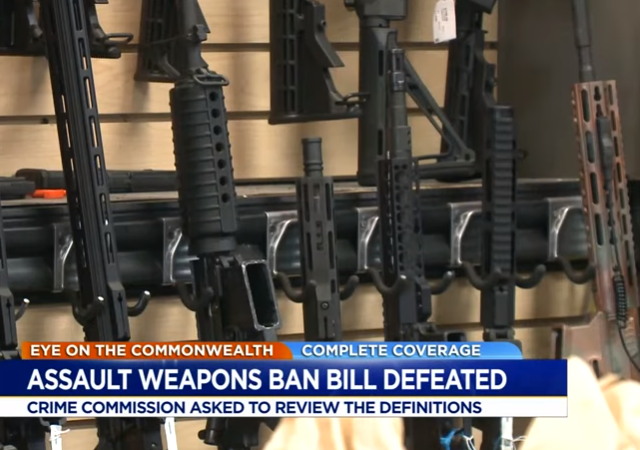 Gun rights supporters scored a victory in Virginia on Monday, as a proposed ‘assault’ weapons ban was voted down. Unfortunately, this is just one battle in what is probably going to be a prolonged war.

A bill backed by Gov. Ralph Northam that would ban the sale of assault-style weapons in Virginia failed on a committee vote Monday morning, setting back one of the biggest priorities for the newly minted Democrat-controlled government in the state.

A crowd of gun-rights activists packed into the committee room cheered as the vote came in, with four moderate Democrats joining Republicans to shelve the bill until next year. Heated exchanges over guns have dominated this year’s legislative session. They were also a key topic of last year’s legislative elections – particularly after a mass shooting in Virginia Beach claimed a dozen lives – and gun control groups heavily funded Democratic candidates.

Gun-rights protesters have been out in force for weeks in Richmond, Va., the state’s capital, over Democrats’ gun control agenda.

“I have friends that are not going to comply,” warned Nicholas McGraw, a gun owner from King William County who came to protest the assault weapons bill on Feb. 7, before the measure died.

McGraw’s comments reflected the attitude of many conservatives and Second Amendment activists in Virginia, especially in its more rural areas.

Cheers erupted when the Virginia Senate Judiciary Committee voted to not move forward on HB961, the the “assault weapons” ban and magazine confiscation bill, for the year.@DelegateMark, who had been pushing for the bill, has a priceless reaction. pic.twitter.com/rvvF8JiWcO

Rejecting the bill was a bipartisan effort, which is encouraging.

Virginia Gov. Ralph Northam’s push to ban the sale of assault weapons failed on Monday after some of his fellow Democrats balked at the proposal.

Senators voted to shelve the bill for the year and ask the state crime commission to study the issue, an outcome that drew cheers from a committee room packed with gun advocates.

Four Democrats — most of them moderates — joined Republicans in Monday’s committee vote, rejecting legislation that would have prohibited the sale of certain semiautomatic firearms, including popular AR-15 style rifles, and banned the possession of magazines that hold more than 12 rounds.

This report from WTVR News is short but informative:

As I said, this is a win but the issue is far from over. Mark Levine, who sponsored the bill, tweeted this on Monday:

This is my favorite response:

Dems out of power: “We have no intention of taking your guns. That’s just a rumor spread by fools and idiots.”

Dems in power: “Take them! Grab them all! Right down to individual rounds of ammunition and anything that even looks like a gun.”

New Jersey is the best example I can think of off the top of my head. Travel through the state with an unloaded flintlock or a lead ball that can be considered ammunition, and get sent to jail for a decade. Glad I live in Kansas where they sell guns and ammo at Wal-Mart.

We can make these people happy, start executing criminals who use a gun to main or kill, by firing squad.

We can make these people happy
————————-
No you can’t. They hate you and want you dead. There is no downside in their thinking. They know gun owners aren’t going to vote for them so they don’t care what you say or want. This is payback for not voting for their fascism.

They don’t want to punish their potential voters.

No judgments. No labels. Well, some judgments. Some labels. No inference, color judgments, or diversity. Law-abiding citizens, first. A positive development.

It was tabled. This can explode at any time.

Correct, it was passed by for the year so the Crime Commission could study it for efficacy on crime. Funny thing is they supposedly already looked at it before it was filed and they deemed it ineffective. Hopefully this thing dies on the vine between sessions. I wouldn’t be surprised if Gov Blackface Klanhood calls for a special session this summer like he tried last year. Don’t be surprised if there’s a false flag (yes I just said that) somewhere in VA this year to reinvigorate this push.

He can also get one of the patrons to shoehorn it into one of the other antigun bills still at play but Va has a single issue rule. I’m sure that Eileen Filler-CornHole will be happy to ignore that rule though.

This will never be over. What we’ve seen in Virginia will be the new Op-Tempo until we can clear the House, Senate and Gov’s office of Democrats….

They…never…give…up. It’s in their nature. They will wait for some Democrat created mess like Parkland to once again push.

Perfecting mankind in their own image… a population living lives of no consequence controlled and directed by their superior intellect. They have to destroy the past because it shows how much rot they have created.

Huh. Not a single story I’ve see identifies the 4 Democrats who voted against it. Hmmm…..

BTW, that “mass shooting in Virginia Beach [that] claimed a dozen lives”? It would have been stopped short if only all the people in that building hadn’t been effectively disarmed.

The graphic above (Rosas) shows the names of all of the nay votes.

Ooops I mean yeas as the motion was to table so a yea is a vote against the bill.

Edwards, Surrovel, Deeds, and Peterson are the Dems that voted against it.

The House Dem’s punished Chap Peterson yesterday by blowing up one of his bills that would allow retired part time police to purchase their service weapons. The only parties that hurts is the part time cops… Petty….

No, they won’t do it now. In fact, they’ll actually vote it down. This is an election year, after all. It can wait until next January.

Actually, we vote in odd years. None of them face the voters until 2021, at least. (Also when we’ll get to try and keep the next Democrat from becoming governor.)

And we’ll be here waiting

I was at the General Assembly for the vote on Monday. The anti’s had maybe 15 there and I’m being generous. There was at least 1,000 Virginia citizens from all over the state there who opposed HB961. Only a very small portion actually got into the room. The hallway outside the room was full as well as the lobby of the Pocahontas Building where the Senate Judiciary meeting was held.

If there’s support for gun control in VA I’m not seeing it, I’ve been to 6 or 7 2A county meetings, Lobby Day and other rally’s against gun control. Hell we had between 2 and 3 hundred show up to rally against Bloomberg at one of his tour bus stops in Arlington VA (the belly of the beast). There were maybe 50 people at his event.

When fighting leftists, it’s always “for now”. We makes the mistake of fighting, winning and then saying, “We won!”….and moving on. Leftists, on the other hand, lose and say “We lost this time, but the next opportunity for this leftist rule/law/idea is ……wait for it….wait for it…..” The never give up and we blindly just assume we won. Once the left gets their teeth in a leftist idea, they don’t quit, ever, until they’ve won.

Perhaps sanity prevailed momentarily and the moderate democrats realized it’s one thing to pass a law, it’s another thing to enforce it.