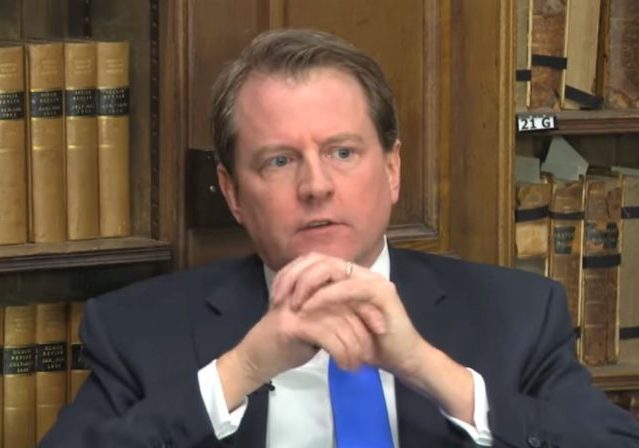 Article of Impeachment II against Donald Trump was “obstruction of Congress.” One of the bases for the Article was the Trump administration’s position that it did not have to comply with House Committee subpoenas to senior administration officials.

Donald McGahn, Trump’s former White House Counsel was not named in Article II, but he was among the people who refused to comply. The House Judiciary Committee went to court to enforce the subpoena to McGahn, and a district court judge, in a much ballyhooed opinion, ordered McGahn to appear.

The U.S. Court of Appeals for the District of Columbia Circuit just ruled that subpoena was unenforceable in court, and reversed. The full opinion (pdf.) is embedded at the bottom of the post.

The Court noted the background of impeachment for non-compliance with House subpoenas:

The House of Representatives has since passed two articles of impeachment against the President. H.R. Res. 755, 116th Cong. (2019). The first article charges the President with “abuse of power”; the second with “obstruction of Congress.” Although the second article does not mention McGahn expressly, it alleges that the President unlawfully directed officials “not to comply with” congressional subpoenas and asserts that these directives “were consistent with President Trump’s previous efforts to undermine United States Government investigations into foreign interference in United States elections.” Id. at 6-8. The Senate voted to acquit the President on February 5. See 166 CONG. REC. S936-39 (daily ed. February 5, 2020).

The Court held, 2-1, that the subpoena was not enforceable in court:

The Committee now seeks to invoke this court’s jurisdiction to enforce its subpoena. The Department of Justice (DOJ), on behalf of McGahn, responds that Article III of the Constitution forbids federal courts from resolving this kind of interbranch information dispute. We agree and dismiss this case….

In this case, the Committee’s dispute with the Executive Branch is unfit for judicial resolution because it has no bearing on the “rights of individuals” or some entity beyond the federal government. Marbury, 5 U.S. at 170. The Committee is not a private entity seeking vindication of its “constitutional rights and liberties . . . against oppressive or discriminatory government action.” Raines, 521 U.S. at 829 (internal quotation marks omitted). Nor does the Committee seek the “production or nonproduction of specified evidence . . . in a pending criminal case”—the “kind of controversy” threatening individual liberty that “courts traditionally resolve.” United States v. Nixon, 418 U.S. 683, 696-97 (1974)….

In this case, the dangers of judicial involvement are particularly stark. Few cases could so concretely present a direct clash between the political branches. The Committee opened an investigation into possible presidential wrongdoing, which culminated in articles of impeachment against the President. The Committee claims that, in furtherance of this investigation, McGahn must testify about events that occurred during his tenure as White House Counsel. Meanwhile, the President denies all wrongdoing, and he has instructed McGahn not to testify.

The branches are thus locked in a bitter political showdown that raises a contentious constitutional issue: The Committee claims an absolute right to McGahn’s testimony, and the President claims an absolute right to refuse it. We cannot decide this case without declaring the actions of one or the other unconstitutional, and “occasions for constitutional confrontation . . . should be avoided whenever possible.” Cheney v. U.S. Dist. Court for D.C., 542 U.S. 367, 389-90 (2004) (internal quotation marks and alterations omitted). Indeed, the House cited the Executive Branch’s litigating position in this very case in support of its “obstruction of Congress” article of impeachment. See H.R. REP. NO. 116-346, at 155 & n.906. In turn, the White House Counsel cited the Committee’s litigating position in the President’s defense. See Trial Memorandum of President Donald J. Trump, In Proceedings Before the United States Senate 49, 53 (Jan. 20, 2020)….

If we order McGahn to testify, what happens next? McGahn, compelled to appear, asserts executive privilege in response to the Committee’s questions. The Committee finds those assertions baseless. In that case, the Committee assures us, it would come right back to court to make McGahn talk. See Oral Arg. Tr. 60:25-61:1. The walk from the Capitol to our courthouse is a short one, and if we resolve this case today, we can expect Congress’s lawyers to make the trip often.

We conclude that separation-of-powers principles and historical practice compel us to dismiss for lack of jurisdiction the Committee’s suit to enforce a congressional subpoena against the Executive Branch.

The DC ruling further demonstrates that Article 2 on obstruction of congress was premature, as I testified. The White House is vindicated in showing that it had valid constitutional arguments to make — arguments ridiculed at the Senate trial . . .

Of course, Democrats are flipping the Turley position by saying going to court would have been a waste of time, so impeachment was justified. Some are arguing that Congress should use its inherent power of contempt to arrest and jail McGahn and others who defy congressional subpoenas.

One thing is clear, this is a huge political vindication for Trump.

Under Pelosi, contempt is Congress’ superpower.

notamemberofanyorganizedpolicital in reply to McGehee. | February 28, 2020 at 9:25 pm

JusticeDelivered in reply to notamemberofanyorganizedpolicital. | February 28, 2020 at 9:59 pm

She most certainly receives a great deal of contempt.

And deserves every bit of it.

that’s OK: anyone with an IQ larger than their hat size rightfully holds Congress in contempt every day.

notamemberofanyorganizedpolicital in reply to Comanche Voter. | February 29, 2020 at 12:55 pm

I’m sure all the Demon-rats know the Russian word for Schiff.

As I understand it, they were not actual subpoenas since there was no authorizing resolution for the impeachment process. The fifth columnists called them subpoenas because they knew that the corrupt news media would cover for them.

They were issued before the authorizing resolution was passed by the House, and the Trump Administration was perfectly within its rights to ignore them.

The day of the President Judges, aka Obama Judges, is far from over. Several have openly defied SCOTUS via wrap around decisions and all clearly feel they are invulnerable.

“In this case, the dangers of judicial involvement are particularly stark. Few cases could so concretely present a direct clash between the political branches….”

This has been coupled is a coup attempt.

Bring obama, clinton, pelosi and the rest of them to justice.

The end game is beginning. The Ratcliffe appointment is a message.

Let me see if I can summarize the court’s voice.

“Sure we can order McGahn to your little Star chamber to testify, but all that means is that his lawyers will tell him to shut up, which is perfectly legal because Trump has the RIGHT to keep his discussions with close personal advisers private, and ordering him to testify will be a great waste of time, both ours and yours.”

The bug-eyed Burbank Bolshevik had what’s known as a legal premature ejaculation.

No we know why Congress couldn’t wait for the courts eh.

Since the subpoena was issued to investigate a supposed crime for which there was no evidence to base any Congressional investigation, you could say that even this “obstruction of Congress” turns out to be entirely a “process trap”. Surely there must be a way to put a stop to this practice. What a racket.

The Impeachment was purely a political battle between the Congress (House) and the Executive. This struggle is not over, and will not die down until the end of Trump’s second term (if we can agree here to stipulate that as a given).

The Court made a wise decision to Stay The Hell Out of the battle. They are already in danger of having theirs powers encroached upon because of all the silly low level judges issuing national level injunctions against action of the Executive. If they take sides with either of the parties in this larger dispute, the other party (Executive or Congress) will go to war against them to try to seriously diminish their powers.

The Republic would survive, but not in the form we (used to?) know it.

notamemberofanyorganizedpolicital in reply to Hodge. | February 29, 2020 at 1:12 pm

“The Impeachment was purely a political battle between the Congress (House) and the Executive.”

But soon Pelosi and her Dems are going to have the House dropped on them.

Lest we forget: NOT HILLARY (Dems)!

CLINTON-WHAT DIFFERENCE DOES IT MAKE

Did you get permission from Milhouse to discuss this decision?

Did you wait for his analysis before opining?

After all, he is the best legal mind on the internet despite the fact that he has never been to law school, passed a bar exam, practiced law, or won a single matter.

A video to help celebrate this Win:

This is from someone I used to respect…” at Patterico.com