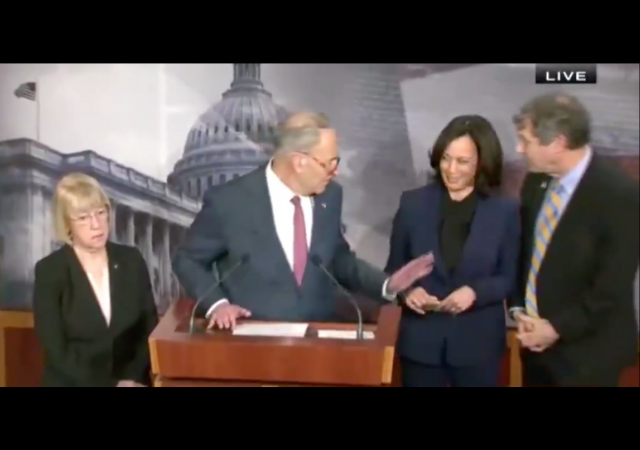 The patriarchy is alive and well in the Senate’s Democrat caucus, apparently. During a press conference on the impeachment side show, Senate

Majority Leader Schumer scolded former Presidential candidate Kamala Harris who was laughing and cutting up in the background.

Watch: Chuck Schumer scolded Kamala Harris this morning for laughing & smiling during an impeachment press conference. Notice how the reporter starts their question over so the clip they use won’t have Kamala smiling & laughing? ?pic.twitter.com/PRKXCZAXVs

chuckles is getting a little testy….he’s not getting his way

Meant to ask this up there^^^^

Does any body know the story of the lady that always sits over chuckles left shoulder whenever he is speaking on the Senate floor?

If you mean Chuckles right shoulder in the photo that is the elegant and lovely Senator Patty Murray from Washington state.

notamemberofanyorganizedpolicital in reply to Anchovy. | January 31, 2020 at 6:08 pm

Must be the Sorass Puppet Master of Chuckie the Klown…..

i think he means the lady that always wears glasses sitting just behind him, she must be a staffer

Sounds like hald is right, but hey, who cares. Some of the online comments about her is she is the puppet master that has her arm up his back and makes his lips move.

Reminds me of the Ron Brown funeral where Clinton was laughing … until he realized he was on camera. He produced some tears in a few seconds. Masterful.

notamemberofanyorganizedpolicital in reply to walls. | January 31, 2020 at 6:08 pm

Did the camera scan down to show Monica?

Milhouse in reply to notamemberofanyorganizedpolicital. | February 2, 2020 at 1:21 am

No, he was outdoors and walking, so it would have been rather difficult logistically.

No dinner for you …and straight to bed

I’ve been scolded before….sorry….that’s not a scolding.

I’m embarrassed to admit I once thought she had a good chance of winning the nomination.

After watching her debate performances, however, I’ve decided she’s high all the time.

Was KamelToe hitting on Sherrod Brown?

Come on Kamala, this whole impeachment thing is supposed to be “solemn and serious!”
Didn’t you get that e-mail?