And when regime enforcers walked on the flags, the crowd jeered them. 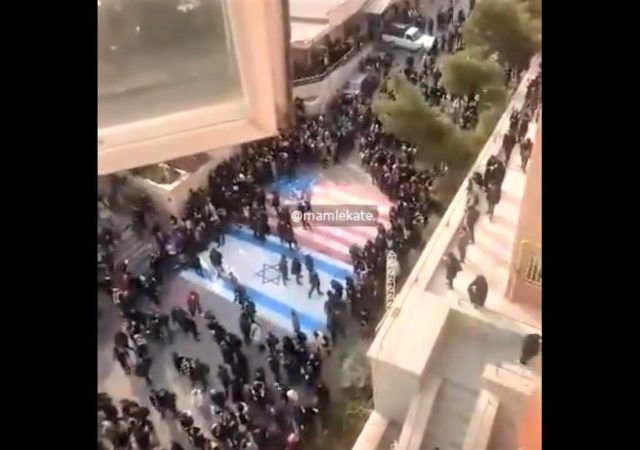 The medieval Mullah death cult routinely puts American and Israeli flags on the ground for people to walk on. (So do Palestinian terror groups.)

Students at Beheshti University of Tehran Refuse to Walk Over U.S., Israel Flags, Boo People Who Do pic.twitter.com/hVPMONwwve

Today, the crowd in an Iranian university refused to trample US and Israel flag #LoveBeyondFlags. These IR ideologies, like forced hijab, are falling one by one. pic.twitter.com/spxEI9DRv4

Students shout down Iran regime enforcers who walk across flags of US and Israel at entrance of Tehran’s Beheshti University. Via @ManotoNews pic.twitter.com/05X5hAvBFy

It would be an interesting experiment to paint the flags outside the DNC and RNC conventions to see what happens.

The medieval Mullah death cult routinely puts American and Israeli flags on the ground for people to walk on.

I bet if flags were painted on the sidewalks in San Francisco that they would be covered by feces in no time, but then again, that really doesn’t mean much.

Pelosi dismisses protests in Iran against regime, “different reasons why people are in the street”https://t.co/weKuQ6fSlO pic.twitter.com/q9YwCUZrQ9

They’re lining up and moving slowly to avoid stepping on the flags of the countries everyone loves to hate. I’m surprised–I was also surprised when the Hong Kong demonstrators started waving US flags, too. Don’t tell me that these revolutionary regimes have become that unpopular!

Still, at this stage, we should take John Quincy Adams’ advice and be the well-wishers of liberty everywhere, but champions only of our own.

Now let’s try the same at an American University.