The legal team urged the Senate to reject the articles along “with the rigged process that brought” the articles to the upper chamber. 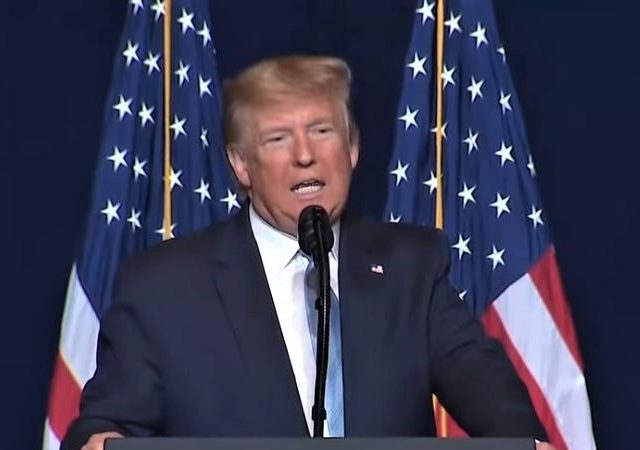 President Donald Trump’s legal team filed a 110-page brief that described the articles of impeachment as “an affront to the Constitution and to our democratic institutions.”

The team also accused the House Democrats of “focus-group testing various charges for weeks” before they decided “two flimsy Articles of Impeachment.”

The House Democrats passed two articles of impeachment – abuse of power and obstruction of Congress – in December in a hasty vote. The legal team noted how the “House Democrats concocted an unheard of procedure that denied any semblance of fair process.”

The legal team urged the Senate to reject the articles along “with the rigged process that brought” the articles to the upper chamber.

Trump’s legal team pointed out that Trump had legitimate reasons to question Ukraine’s policies in order to receive aid. But then once Ukraine addressed the concerns the administration released the aid.

The House prosecution team filed its own brief over the weekend, which includes references to Special Counsel Robert Mueller’s investigation.

Trump’s team immediately dismissed these references because no one charged Trump with any wrongdoing or colluding with Russia to defeat failed Democratic presidential candidate Hillary Clinton in 2016. From Fox News:

“The Senate cannot expand the scope of a trial to consider mere assertions appearing in House reports that the House did not include in the articles of impeachment submitted to a vote,” the memo said.

Trump’s attorneys also aimed to blast a hole through the articles of impeachment, calling for the president’s immediate acquittal because they do not include impeachable offenses.

“After focus-group testing various charges for weeks, House Democrats settled on two flimsy Articles of Impeachment that allege no crime or violation of law whatsoever—much less ‘high Crimes and Misdemeanors,’ as required by the Constitution,” they wrote.

The arguments for the trial start Tuesday on the Senate floor.

When are we going to see charges filed against those behind this crap? Surely there is some basis for such.

“Mistakes were made but there was no intent.”

A low-level flunky might get charged with a minor offense, but the traitors will go free to continue destroying America.

Waitong for them to describe it for what it is: a coverup for the massive corruption ad teeason biden, pelosi, kerry, clinton etc engaged in alongside obama/jarretr for 8 years.

So if I am understanding this correctly, Team Trump is calling for dismissal without a trial? There is a big difference between the Senate dismissing the impeachment for being groundless vs voting later to acquit. I believe it is critically important constitutionally to dismiss the charges as being groundless. Holding a trial provides a thin veneer of legitimacy that must not be granted. This was a criminal abuse of power by the House Democrats and must be dismissed accordingly.

I really fear that the Republicans will engineer something to allow the dumpster fire to gain a toe hold in the Senate and to great damage. End it NOW! And with unequivocal clarity for posterity and survival of the constitution.

Ted Cruz did an interview with Maria Bararomo yesterday where he made a very good case that it was much better to go through the process and formally Acquit, rather than just dismiss.

Keep in mind that Cruz was among the most bitter anti-Trumpers for months, even after the election. I still don’t trust him. He could be right but I believe it is a mistake for the Senate to accept THESE hyper-partisan articles that made a mockery of due process and should be dismissed for what they are.

I just don’t see an upside to having a trial. It just invites further shenanigans by Democrats and NeverTrumper Republicans of which I am convinced there are enough of to convict.

It’s not like Trump would miss an opportunity to defend himself. He has already won in the heart of voters and will be re-elected to prove it. Meanwhile, historians would be forced to explain why the Senate chose to dismiss. THAT is a better debate to have and a “cover up” argument would become the ultimate joke for all time. Why tempt fate? End it now while we still can, before the partisan dumpster fire explodes out-of-control into a bipartisan dumpster fire.

Cruz is the guy you want to listen to right about now. A definite conservative that won’t try to bow and play nice with an indecisive base like Collins.

Absolutely this should be dismissed with prejudice!!

Sadly while there are Senators like Romney in place this will never happen. What Romney and co don’t realise is they are relics of the past. They are members of the dumb party and will contort themselves to appear even handed and fair in this political witch hunt.

They need to understand that their Dumb Party GOP is dead.

This is not a court of law. There is no such thing as prejudice here.

I think there 47 members of the Senate who are full of prejudice.

But, point taken. It is not a court of law. I think it is much bigger than that.

“All of this is a dangerous perversion of the Constitution that the Senate should swiftly and roundly condemn. ”

Mary, I loved the headline but searched in vain for this line in the post. I was confident that I would find it in the filing but respectfully suggest that you should add the quote in an update.

Also, claiming something is a dangerous perversion is an accusation that will make Democrats preen with pride. Just sayin’

Think about this. Is or could Joe 30330 subject of blackmail over his Ukraine actions? That was the basis of the Russia Hoax. So under Title 5 Trump by LAW had to enforce Treaty 106-06 or in laymans term the phone call. Blows the impeachment right out of the water.

Trump Will Be ‘Acquitted Forever Of These Bogus Charges’

The senate needs to do a trial of sorts in
Order to fulfill the constitutional language.
No need to drag it out, or call many or any wittiness.
Then vote. If there is no trial however brief then
An accusation can be made the senate didn’t acquit constitutionally.

If they were ever able to impeach Trump, he’d have that sucker framed and hang it in the oval office.