Contrast this with 2009, when Obama remained silent during the brutal suppression of the Green Revolution 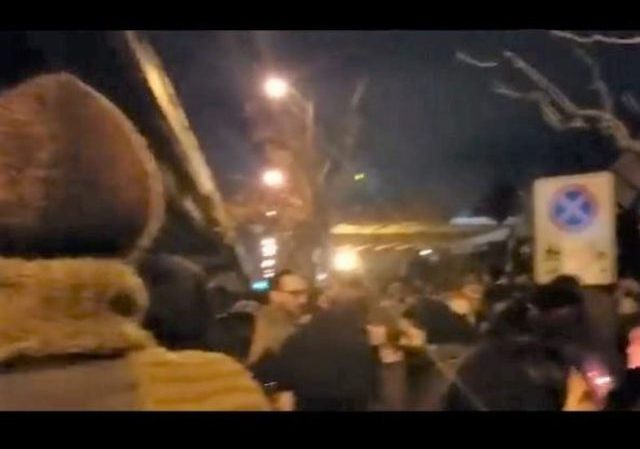 Protests have broken out across Iran over the downing of the Ukrainian passenger airplane by the Iranian Revolutionary Guard Corps. — which tried for days to cover it up.

The protests are a continuation of the protests last fall, which were crushed by the IRGC under leadership of the late Qassem Soleimani, with an estimated 1500 killed and thousands more arrested.

To the brave, long-suffering people of Iran: I’ve stood with you since the beginning of my Presidency, and my Administration will continue to stand with you. We are following your protests closely, and are inspired by your courage. 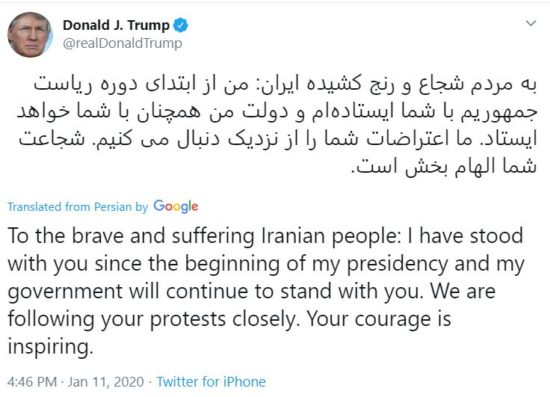 Contrast this with 2009, when Obama remained silent during the brutal suppression of the Green Revolution, He Who Cannot Stop Talking, Is Silent On Iran.

Trump showing Obama what a real President looks like.

Obama is a traitor, and a toady to islamic fascists, and fascists of any kind.

As if treason wasn’t enough, obama is also the most corrupt POS ever to hold high ofice in the US.

notamemberofanyorganizedpolicital in reply to TheFineReport.com. | January 11, 2020 at 6:26 pm

Hear Hear and Double that!

In a very quiet voice that reverberates across the room.
“No. Bill and Hillary.”

Obama can’t be a traitor. There is still no credible evidence that he is an American citizen.

notamemberofanyorganizedpolicital in reply to Rusty Bill. | January 11, 2020 at 8:54 pm

And that’s the truth! – Edith Ann.

Protest from the fake news conglomerate coming in 3, 2, 1 ….

Of course the President Obama and his administration didn’t support the Iranians, or any of the rest of the “Green Revolution” — those revolting being peasants, that would have been populist of him.

Trump tweeted the proverbial Persian rug right out from their defeat.

Anyone see anything more about this?

U.K. Ambassador in Tehran was arrested for filming the protests.
https://www.itv.com/news/2020-01-11/uk-ambassador-arrested-in-iran-amid-protests-over-shooting-down-of-plane/

“I beg your pardon, I never promised you a Persian rose garden.”

stevewhitemd in reply to notamemberofanyorganizedpolicital. | January 11, 2020 at 6:37 pm

This is basically an act of war; you can’t arrest ambassadors and diplomats, only expel them.

Of course, you can’t invade a foreign embassy and take the personnel therein hostage, either…

Look who is aiding and abetting – giving support – to the Iranian dictatorship.

Warren, Sanders Did Participate In That Joint Conference Call With Iranian Lobby Group Linked to Tehran

Update to this story. Should be automatically disqualifying if you’re bashing our position on the phone with Iranian-lobbying group the day after we’re attacked.

TheFineReport.com in reply to notamemberofanyorganizedpolicital. | January 11, 2020 at 6:39 pm

She remains the best of the worst – which is still very bad.

Meanwhile back at the france – where thousands of wannabe Iranian dictators incubate…….

Almost as courageous as our Anti-fa protestors, who risk their lives protesting the brutal Trump regime.

Boy Donald knows how to stir the pot doesn’t he? I’m not certain that this is a good thing—it’s going to get a lot of Iranian protestors killed. But it’s also going to give the mullahs a headache. And for that Donny gets two scoops.

Obama gave the mullahs pallets of cash–but not a headache.

notamemberofanyorganizedpolicital in reply to Comanche Voter. | January 11, 2020 at 8:56 pm

God gave people free will – so they make their choices – no one makes them for them.

rinardman in reply to notamemberofanyorganizedpolicital. | January 12, 2020 at 8:43 am

Boy, you must be a Republican! Your betters in the Dimocrat Party wouldn’t agree with that. 🙂

“his tweet by @realDonaldTrump with more than 100k likes is already the most liked Persian tweet in the history of Twitter. A strong show of support by Iranians for Trump’s Iran policy, something the MSM does not and will not report.”

notamemberofanyorganizedpolicital in reply to Leslie Eastman. | January 11, 2020 at 8:55 pm

“We” (of “we the people”) are the new media and journalists now.

You know what’s not happening? Fire is not falling on Israel.

For the moment, there is no one to coordinate terror attacks.

Trump is going to force Glenn Greenwald to praise him after the Mullhah regime collapses and gays stop getting executed in Iran.

Right now Glenn is retweeting tweets about Trump not really caring about the Iranian people because he halted immigration and travel from Iran. Lol.