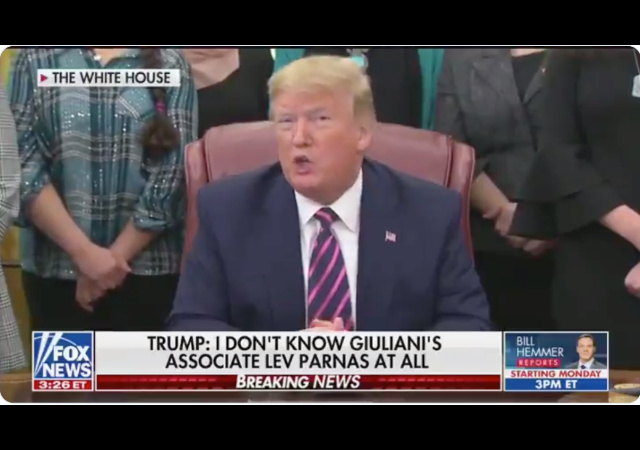 President Donald Trump snapped at CNN’s Jim Acosta after he attempted to interrupt the president while he spoke.

Acosta asked Trump about key impeachment figure Lev Parnas. He told MSNBC and CNN that Trump has lied and that he knew of Rudy “Giuliani’s efforts to pressure Ukraine to announce an investigation into the Bidens.”

Trump insisted he does not know Parnas “other than I guess I had pictures taken which I do with thousands of people.”

When he finished, Acosta tried to continue his questions, but Trump stopped him.

No wonder Pelosi had that Cheshire Cat grin. Same old tired Democrat playbook. Perhaps they will bring in Christine Blasey Ford if all else fails. What a group of nasty tyrants.

I argue that smile is going to haunt her come Sept to Nov.

Hearing voice saying how sad it is to impeach a president as she signs the bill to impeach will speak the truth to the American voter about who she really is.

I’ll never understand why the administration puts up with the insufferable SOB. I’d bar the a$&%ole from any event.

They tried. If I recall correctly, a judge said that if they chose to have such things as “hard passes” and yet wanted to take his away then they had to first publish objective standards for behavior and then wait for him to violate those standards.

Is “Don’t be a whiny little punk bitch” objective enough?

Yes, even according to the judge. All he required is that they publish the rule and then enforce it. Or get rid of “hard passes” altogether, which is what I would have done.

That should be easily done. Draft and Publish a simple rule: anyone may ask questions only after being recognized by POTUS. The first Acosta opens his trap, he’s banned for life.

Indeed. But did the White House actually publish such rules, as the judge told them they had to?

Alternatively, they could have just canceled all hard passes and then reissued them on the explicit basis that they are a favor granted by the White House that can be canceled at a whim. That’s what I would have done.

I quickly found out that the shock wasn’t the worst part… the worst part was the humiliation I felt from the warm, wet spot in my pants every time he shocked me and yelled at me.

And no, I didn’t piss myself. Why do I like it so much?

Parnas was something that came out in November if I recall correctly. It seems as credible as the others in the Schiff show. Not a direct contact, and he being charged makes it look like a Herr Mueller type coercion move rather than a genuine effort coming from Trump.
Parnas has not had anyone to back up his claims, and that handwritten note is just too cute to consider as legitimate.
But of course Boy Wonder Acosta would latch on to that, he is also part of the propaganda team, so he will push any lies that advance the left’s agenda.

Parnas – I will let an attorney chime in, but Parnas is an attorney and the code of ethics requires him not to disclose information without consent of the client. If the action was illegal, the disclosure is limited to law enforcement. Congress is not law enforcement.

Trump was nor is his client and i doubt Giuliani is either.

These shaky accusations from Parnas are right out of the Dem playbook. They wait until the last minute and then drop something questionable into the media when it’s past the time for new evidence. That’s exactly what they did with Chris Blasey Ford.

This rat only solidifies the PDJT base.