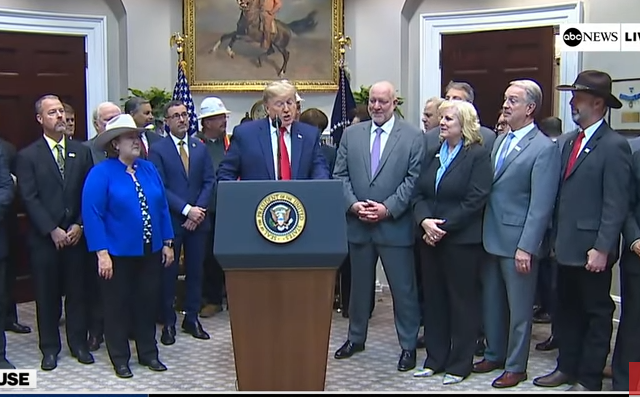 While much of the media and the American public was focused in the Iran attack this week, President Donald Trump announced significant changes to the nation’s landmark environmental law.

The changes would make it easier for federal agencies to approve infrastructure projects without jumping through needless hoops set by green justice bureaucrats.

Many of the White House’s proposed changes to the 50-year-old National Environmental Policy Act have been supported by business groups that contend the law has delayed or blocked projects like laying out oil pipelines and building dams and mines, among other things.

…If the proposals are enacted, it would be the first overhaul of NEPA in more than 40 years.

The plan, released by the White House Council on Environmental Quality, would no longer require any form of federal environmental review of construction projects that lack substantial government funding. The change would also widen the category of projects that will be exempt from NEPA regulations.

“We want to build new roads, bridges, tunnels, highways, bigger, better fast and we want to build them at less cost,” President Donald Trump said at the White House on Thursday.

In the four decades since NEPA was established, there have been enormous changes in construction techniques, materials, innovative inventions, and more environmentally sound processes that have been developed. Common sense would dictate a review and update of regulations and requirements.

Mary Neumayr, chair of the Council on Environmental Quality, reviewed the nature of the intended changes.

Neumayr said the proposal is “simplifying the definition of environmental effects and clarifying that effects must be reasonably foreseeable and require a reasonably close causal relationship to the proposed annuity.”

The impacts of increased greenhouse gas emissions and the climate crisis, however, can be a longer-term issue and the length of anticipated impacts can affect whether a project is approved or not.

The proposal “would not exclude the consideration of greenhouse gas emissions in NEPA analyses,” Neumayr said, but the Obama-era ruled had required it.

Nonetheless, environmentalists persist in whining about the proposal and claiming that it will create a Trump-caused disaster.

Environmentalists say those changes would allow the government to look the other way when projects contribute considerable amounts of greenhouse gases into the atmosphere.

“Over past decades, courts have said this means not only what’s happening on the postage stamp-sized area around the pipeline or the bridge, but the cumulative impacts on the environmental health and water and communities surrounding the project. That’s what they’re going to try and restrict,” said Christy Goldfuss, who was the managing director of the CEQ for the last two years of the Obama administration.

…“We have tools to estimate what the future will look like as a result of climate change and that information should be available to decisionmakers when they spend taxpayer dollars,” she added.

So, Goldfuss wants us to base complex construction and infrastructure decisions of unreliable models that have proven to be as accurate as Ouija boards.

She isn’t the only pearl-clutcher, either.

Rolling back NEPA would allow corporations to operate in communities like ours in South TX without taking environmental or health impacts into consideration.

Once again, the Trump administration is putting polluter profits ahead of the safety of our communities.#ActOnClimate https://t.co/X3iymrkThB

Rolling back NEPA would allow corporations to operate in communities like ours in South TX without taking environmental or health impacts into consideration.

Once again, the Trump administration is putting polluter profits ahead of the safety of our communities.#ActOnClimate https://t.co/X3iymrkThB

Trump’s proposed change to #NEPA is not just irresponsible, it’s dangerous. It eliminates considerations for climate change in major infrastructure projects—risking our coast lines, the Everglades, and the entirety of our environment in #SoFla. https://t.co/8xYCsxBofh

In conclusion, the only climate change I foresee is the flooding that will come from the copious amounts of liberal tears being shed over Trump’s many victories.

The swamp losing control of its graft.

notamemberofanyorganizedpolicital in reply to TheFineReport.com. | January 11, 2020 at 5:33 pm

Feel good story of the month.

I guess when it comes to environmental regulations, the left doesn’t want to clear the air.

Regulations you know aren’t too useful for imposing delay until they’ve extracted enough from you. (Really? We can’t build until we take care of the snail darters? Frogs who don’t live here? “Creeks” that only exist when it rains?

Put standards out there, n there’s less opportunity for graft.

I’m surprised they didn’t work the environmental racism angle too.

This pulls the fangs from a number of ‘environmental’ groups who have been making good book by suing (or implying they would sue) corporations who are expanding or building. It’s just one step away from the Mafia.

“Nice building plans you got there. Too bad we’s gonna find an endangered dandylion or some frog dere, if’n we don’t get a few thousand dollars in ‘consulting’ fees.”

unreliable models that have proven to be as accurate as Ouija boards.

Less. They’re less accurate than a Ouija board. The people pushing the pointer actually want the answers to be true. Climate models, not so much.

This is one of the keys. It often isn’t merely the regulation, but that the “review” can go on forever – maybe we should leave it in place for California’s high speed boondoggle rail from and to nowhere.
Kafka wasn’t supposed to have written instruction manuals.

Also it isn’t as if nothing will be reviewed. Waybackwhen, the Alaska Pipeline had a fixed end date for filing objections. So it was built.

Congress has power to limit the jurisdiction of the courts (and if they gave it to the EPA on a silver platter with the rest of stuff they didn’t want to touch…).

There is a computer term, “The Tyranny of the Default”. What also changed is the default is to go ahead instead of rejecting things, and there is a limited time. Instead of the default to have to jump through an infinite series of hoops.

I’m all for Global Warming climate models, particularly if they have to wear bikinis and are thin and in good shape because of the heat.

I hope their hate is roiling around inside them making life even worse for them with the bile rising into their throats and making them even sicker.
There aren’t enough nasty things I’d like to come up with to help along the liberals suffering.
We had to endure obama, they can go buy Pepto Bismal by the pallet load and suffer for another 4 years. And I’ll laugh and laugh and laugh.

Back around 1990, our company had construction of a 1.8 million square foot building delayed for almost six months become someone alleged that our proposed construction site was home to an endangered species of frog. An expensive study finally determined that there no frogs to be found. Ultimately our location provided the community with some 1500 full-time jobs (with full benefits) but it very nearly didn’t happen… we were deep into our search for a new location, and had very nearly completed negotiations to move the facility to a different location.

You’re lucky the opposition didn’t have the US Fish and Wildlife plant fake evidence. Of course, they hadn’t been to the Clinton School of Liars then.

Those models are great! They predict disaster if X happens. So we prevent X. Disaster does NOT happen. Model vindicated!

The only way to solve it is if we ignore those models for a decade or so, and see what happens. If their predictions turn out to be wrong, then we can bury them altogether. If not, well, mea culpa.