“Mr. Trudeau said this information ‘reinforces the need for a thorough investigation into this matter.’” 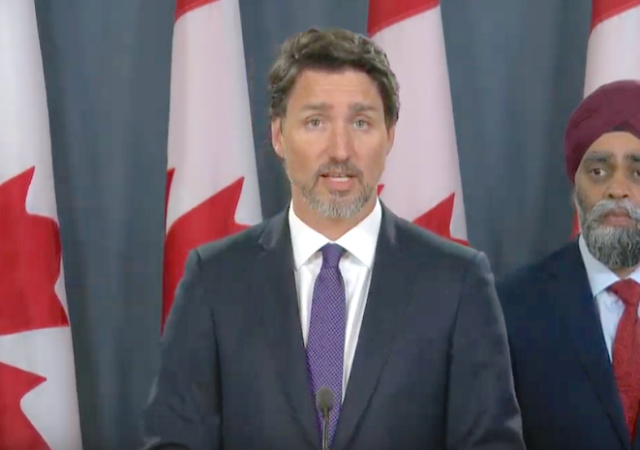 Canadian Prime Minister Justin Trudeau announced the Canadian government has information that Iran shot down the Ukrainian plane on Wednesday:

“We have intelligence from multiple sources including our allies and our own intelligence: the evidence indicates that the plane was shot down by an Iranian surface-to-air missile,” he told reporters in Ottawa Thursday.

“This may well have been unintentional,” he added.

Mr. Trudeau said this information “reinforces the need for a thorough investigation into this matter.”

The majority of people on the flight – 138 – were heading to Canada, and at least 63 were Canadian citizens.

What a fucking pussy.

63 of his citizens are dead from a MILITARY strike, and he says ‘This may well have been unintentional’.

Good god man, at least PRETEND to be mad.

notamemberofanyorganizedpolicital in reply to The Packetman. | January 9, 2020 at 3:57 pm

…as soon as he holds a seance to contact his long lost dad, Fidel.

I thought for sure he would come out in blackface. Maybe wearing some kind of Arabian Nights costume.

To be honest, it was unintentional. The Iranians F***ed up, F***ed up big time. They either screwed up with their IFF and panicked. (Good information to know) or screwed up the operation of their equipment. (Also handy to know) The Iranian ADA people and their Russian instructors/operators are probably room (or soil) temperature by now.

Either way, it shows the Iranians are weak, incompetent idiots, and makes them look bad on the world stage. Trumps measured response to their failure to hurt Americans makes them look even pathetically worse. Leave it to the Ukrainians or Canada to extract amends/revenge. Pop some popcorn and watch the show. (And say some prayers for the dead.)

I can’t wait to see how the left tries to pin this on Trump.

Trump’s policies denied the Iranians from getting better military training and foreign aid which caused them to shoot down the plane by accident.

JB, evidently you having been watching, the left has been pinning this on Trump before the plane hit the ground.

This incident will simply be yet another demonstration of the incompetence of this woke putz.

At pprune.com they are hearing that the debris is being buldozed.

As retaliation, trudeau will temporarily limit all iranian ability to bribe canadian bureaucrats and elected officials.

What an obama this putz is.

Anyone know why there were so many Canadians on that flight? 63 Canadians is a lot for a flight going from Iran to the Ukraine.

The “to the Ukraine” part is easy to understand — they were changing planes there. The question is what so many Canadians were doing in Iran in the first place. My guess — and that is all it is — is that almost all of them were Iranian-Canadians, who had gone back to visit family and were now heading home.

In which case they may have inadvertently nipped several suicide attacks in the bud.

Presumably making a connection back to Canada in Ukraine. Happens a lot if you ever travel in foreign countries – presumably there were several flights that had a lot of Canadians coming in from other countries as well for 1 big flight later from Ukraine-Canada.

They’re not Red-Green types / or Tim Horton patrons / or fans of the MapleLeafs & LesHabitants type of Canadians, eh. These “Canadians” would never be heard singing Michael Palin’s wishes of being a lumberjack leaping from tree to tree as they float down the mighty rivers of British Columbia.

These “Canadians” so-called are really Muslims who’ve been given, foolishly, Canadian papers. They are Muslims first and foremost. They were in Iran visiting family.

63 Canadian citizens and he is unmoved. Canada is so lucky to have him.

What were a boat load of Canucks doing in Iran?

@Corwin of Amber, why are you so sure this was an accident? It may have been. But then the Iranians never believed the USS Vincennes shot down that Iranair flight back in 1988 by accident. And Khamanei’s speech the night of the missile strike contained odd references to that event.

The day Suluimani’s finger and other remaing bits of organic matter were buried Iran’s president Rouhani was sending out tweets with veiled, threatening references to the 1988 bombing of the Pan Am flight over Lockerbie, Scotland.

Coincidence? I’m not a great believer in coincidences. My default position is to first suspect enemy action. Later I can be convinced it was a coincidence.

We all know the Iranians f’d up a shot down that plane. But, what’s up with the beard?

Mr. Martini, I grant you that they effed up. But it’s entirely possible they effed up on purpose and deliberately shot it down.

Too many top tier Iranian leaders have been making references to airliners getting deliberately blown out of the sky (in the case of the Vincennes shooting down the Iran Air flight that is entirely and solely their view) to dismiss that possibility.

Recall that, in 1988, the U.S.S. Vincennes shot down an Iran Air civilian aircraft, killing 290 people. The circumstances were disputed, but Reagan immediately issued a statement of “deep regret,” and eventually (1996) the U.S. paid ~$213,000 per passenger in a settlement.

This is not to equate the U.S. with Iran, other than to say that “accidents happen,” and not just theirs. The difference, thus far anyway, is that Iran has admitted nothing, and has withhold the flight data recorders from Boeing. The United States did not obstruct the investigation, and then paid that settlement.

We shall see how Iran’s shoot-down goes. Confident people, and their governments, admit their errors and try to rectify them. I think it’ll be a cold day in hell before Iran admits anything, much less pays a settlement.

It should be noted that the civilian aircraft took off during a hot war in a direction directly bearing on our ship. They had no ID to suggest it was civilian. They had a very short time to make the decision to shoot the threat down.

This is the only man in the world who actually looks less masculine with a beard.

RandomCrank, yes accidents do happen. But the Iranians never believed the Vincennes shot down that Iran Air flight by accident. They remain convinced the “Great Satan” deliberately shot that plane down.

And Ayatolla talked about that event in his speech. Well before the Iranians shot down that UIA flight.

The off-the-wall reference seemed odd and out of place. But after they shot down the Ukrainian airliner it struck me Khamenei might have been dropping an ominous hint.

And there will be plenty of people who will never believe the Iranians shot down the Ukrainian plane by accident.

The point is this: We are not perfect. We make serious errors, and the shootdown of that Iran Air flight was one of them. The difference is in what happens afterwards.