“The primaries might be tightly contested among the top contenders, and I don’t want to get in the way of a progressive candidate winning any of them.” 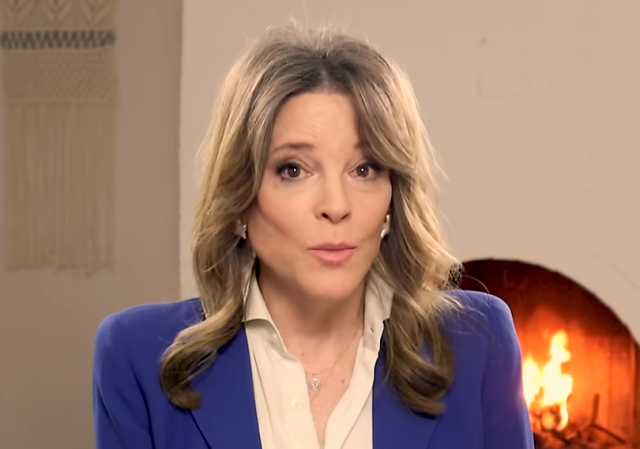 Marianne Williamson, the woman who wants to “harness the love,” ended her 2020 presidential campaign.

Williamson moved to Des Moines, IA, to gain some ground before the primary. However, she recently fired her entire staff.

I stayed in the race to take advantage of every possible effort to share our message. With caucuses and primaries now about to begin, however, we will not be able to garner enough votes in the election to elevate our conversation any more than it is now. The primaries might be tightly contested among the top contenders, and I don’t want to get in the way of a progressive candidate winning any of them.

As of today, therefore, I’m suspending my campaign.

My deepest gratitude to those of you who supported my candidacy for all these months. The ideas we discussed are important, and I hope they’ll find seed in other ways and in other campaigns. From rescuing underserved, at risk and traumatized children; to proactively waging an agenda for peace and making humanity itself America’s greatest ally; to integrative health models within our health care system and incentivizing health; to reparations to achieve deeper reconciliation between races; to repudiating the corporate aristocracy; to the creation of a more mindful politics; to changing from an economic to a humanitarian bottom line; to initiating a season of moral repair—we brought issues to the fore that I hope contributed to the campaign season. I remain as committed to them going forward as I was on the day we began.

I learned many things about America during this campaign. I’m more convinced than ever that we’re a good and decent people, that democracy matters, and that what our country has always stood for is worth struggling for. I will continue in that struggle, and I know that you will too.

Williamson made a splash at one of the first debates when she declared only love could beat Trump:

“Mr. President, if you’re listening, I want you to hear me, please: You have harnessed fear for political purposes, and only love can cast that out,” she declared from the debate stage in June. “I’m going to harness love for political purposes. I will meet you on that field, and sir, love will win.”

Williamson could not quite break 1% in the polls. She has not participated in debates since July.

Williamson tried to mend fences over the summer over her criticism of clinical depression. It did not move the needle much since she “stood by other remarks that mental health experts warned could increase the stigma surrounding mental illness and discourage people from seeking medical help.”

How many books did she sell?

Has she heard from Larry Flynt, yet? Ah well, may every gadfly have their moment.

I did too. She was as loonie as the others just not a phony like the others.

So ideas and leadership not the field of love win the day?

Too bad, I suppose. An utter loon, with no ideas which have any possible relevance to the real sidereal universe, but still by far the best human being in the D’rat mob. The others are a pox on the American Experiment. Should fire from the heavens (conventional lightning would do) incinerate all the other Dem candidates, the world would be a slightly better place.

It’s a shame that the Democrats have lost their only credible candidate. 🙂

Now write your book on your trials and tribulations as real live presidential candidate!

What a putz this woman is. She should have left it alone and continued her b.s. business, which now has as much credibility as biden’s tenure as vice president.

Who? I’, not cracking wise here; I’m serious. WHO?

I think it was her crystals that told her no.

Suddenly, I don’t feel quite so clinically-depressed.

Somehow I don’t think she was in the way of any of the rest of the candidates.
Odd how she talked about the founding of this country and how bright a light it was, yet wants a progressive candidate, which these days especially, means Communist light or full bore totalitarianism called communism, to be the new “enlightened” freedom the left wants for everyone.
She is about 400 bolts short of an erector set. This nut is some kind of “spiritual advisor” to Oprah, so that kind of explains Oprah and her in one fell swoop.
Well, at least she is a harmless (being she had zero chance from the start) nut job who has gone off to find her new tree.
Buh-bye … go sit on some crystals or something.

Well, their highest priests are the chi comms, the mullahs and the islamists.