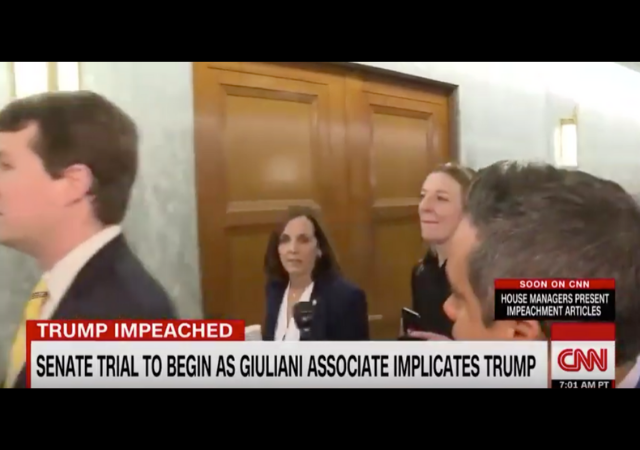 Thursday, Sen. Martha McSally refused to answer a question from CNN reporter Manu Raju. In her refusal, she called him a “liberal hack.”

You can see that very brief, but watchworthy video here.

Shortly thereafter, someone in McSally’s camp registered the domain, LiberalHack.com and her re-election campaign was capitalizing on the quip.

A little insight into how calculated this was.

McSally attacked Manu in the 10am hour. She had registered the domain name "https://t.co/YQW3ySFPna" by the 11am hour.

Calculated, you say? Because, I don’t think that’s how it works. See also:

If she registered the domain after saying it, wouldn’t that suggest the opposite premeditation? I know sequencing can be hard, but keep at it.

But suppose it was calculated. So what? Was she wrong? Does that make her allegation any less true? The internet is on the case!

Some people are mad and without the smallest whiff of irony, used McSally’s campaign opportunism to pitch for the other guy in the race:

McSally didn't win her seat, it was handed to her. I hope @ShuttleCDRKelly wins it away. He won't launch baseless attacks on our press, our eyes and ears, and fund-raise off them.

@SenMcSallyAZ has disgraced herself, her constituents & her country. She does not deserve to serve in the Senate. She's down in the polls. Lets get her smart, respectable & capable opponent elected. Arizona deserves better than this right wing hack. @ShuttleCDRKelly Senate 2020

I’m sure she planned it. It could’ve been anyone journalist not at Fox News. Just so happened to me Manu. She needed a push in the polls. This is a spur of the moment comment out of annoyance. It looks planned and she is the worse of the worse of women in gov’t. Horrible example

And then there are those with a brain.

I mean, Nevertheless, she persisted… remember that gem? In any case.

In the McSally conspiracy, all of this leaves only one explanation — TIME TRAVEL.

Does the domain redirect to cnn.com?
Donna Brazile wrote “Hacked” but is on Fox.

The Great Awakening. Welcome to it, Sally.

McSally = realizing that Trump can butter her election bread.

The idea is to keep her feet to the fire. She’s been squishy in the past.

I can’t believe LiberalHack.com was still available. There are so many people who should have registered it already.

That was my first thought: How is this not already a conservative media criticism site?

Anybody who pisses off ‘journalists’ this much certainly has my vote, if I lived in Arizona.

“Over the target” applies here.

This is how it should have been handled years ago. Hack mouthpieces should be called out and neutral reporters/journalists should be acknowledged.

Lev Parnas told some people that McSally had planned to do this with Trump in November. Parnas was in the room and was part of the conversation. He has notes on a Holiday Inn pad.

Yep and he’s asking for one month of suspended sentence per bullet point he reveals.

I’m not a McSally fan. Haven’t been for almost 35 years. She’s way too much like McCain.

But I have to say it has been absolutely precious watching CNN (and other liberal hacks) lose their shiznitz over this. And good on her staff for locking down that domain. Someone over there is thinking.

As to pre-planned….
It’s entirely possible it was pre-planned, and they didn’t pull the trigger until after the encounter. But the answer to that is “So?”

I wish, though, that she had called him a “CNN hack” rather than a “liberal hack”. Thanks to CNN’s hit job on Sanders during and after the recent “debate”, many liberals have recognized that CNN is a whorehouse. McSally just gave those liberals a reason to hold their noses and believe that perhaps CNN is indeed the lesser of two evils.

Also, people really do exist who believe wholeheartedly that Comey, Hillary, and a whole slew of other swamp vermin belong in the slammer, but to whom the term “liberal” isn’t a dirty word. I’m one of them.

Does any veteran remember what an OODA loop is? It is obvious that Kyle Cheney does not. OODA stands for Observe, Orient, Decide, Act. You know for sure that Colonel McSally does.

Let me get this straight: Senator McSally is walking down a hallway with a couple of staffers. Some CNN root weevil calls out a question and shoves a microphone in her face. She calls him a liberal hack and says she’s not going to talk to him. Said root weevil responds by asking if she’s refusing comment, to which the senator counters by calling him a liberal hack again.

How does that constitute an “attack” by Senator McSally on the aforementioned liberal hack?

Liberalism is divergent. Libertarianism is emergent. Progressivism is monotonic. Conservativism is moderating. #PrinciplesMatter

Any time someone takes a reporter down a notch it’s a good thing. Reporters like to claim that they have a special constitutional status, and even that they’re a “fourth estate” (although hardly any of them knows what an “estate” is, or can name the first three), but does anyone take such claims seriously?

I’m proud of Senator Martha McSally! She and I are old fighter pilots and one thing we all have in common is call it like we see it. In the cockpit, there is no one else to ask for advice and the decisions have to be made instantly. We all seem to lack filters and it does raise hackles occasionally. I praise her for the use of nonvulgar language but I feel that it was warranted. I might have expressed myself by saying, “I won’t talk to you liberal POS” And when he asked again I would have upped to “Get out of my f**king sight or die”. IMHO