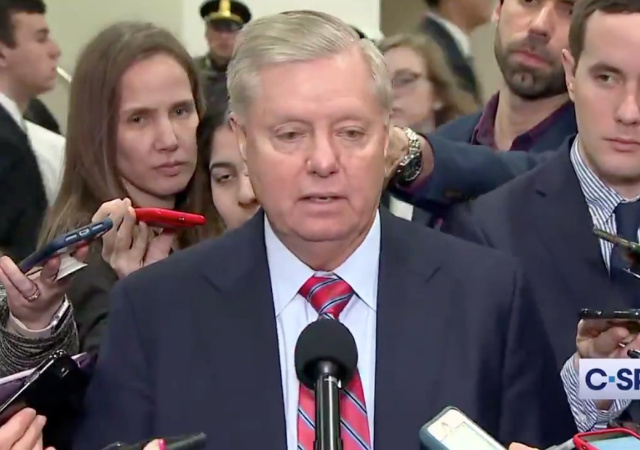 Sen. Lindsey Graham (R-SC) threw some cold water on the Democrats just moments before day eight of the impeachment trial.

The Democrats desperately want witnesses in the trial, but they seem to forget the Senate has two sides.

Sen. @LindseyGrahamSC on witnesses: “I’ll make a prediction; they’ll be 51 Republican votes to call Hunter Biden, Joe Biden, the whistleblower and the DNC staffer at a very minimum.” pic.twitter.com/jpoJIfzg7k

The Senate needs 51 Senators to vote for a motion in order to pass it. Now I do not know if they put up a motion on witnesses if it only applies to one side, but something tells me no.

So this means the Republicans would have the ability to call their own witnesses.

Graham is not the only one who wants to know more about former Vice President Joe Biden’s thinking when it came to his son Hunter sitting on the Burisma board.

This year, he can’t even remember what state he’s in. His perjury defense will be senility.

Giving testimony would kill his campaign for sure. People will see for themselves how he behaves under real pressure, where his signature & usual malarkey answers won’t be accepted.

It was rnough to out new fox news board member and rino haxk paul ryan.

The only one the Dems will actually get to belly up to the big table is Bolton. The media and Dems (same) talk about him like he holds the smoking gun. Reality is, he could end up being a great witness FOR Trump. Before you call a witness for the prosecution, you have to know what his answers will be and they can’t know that. In exchange they will have to offer up several people. They have to know a few of them now and maybe are willing to accept that damage to get Bolton. Reality is that Trump has info they don’t have and he knows who else to put up there.
.
Remember Pelosi called for impeachment based on a phone call that nobody had a transcript of assuming it would be the smoking gun they needed. She never in her wildest acid induced dreams thought Trump would release the transcript. The very next day the transcript appears and for anyone who actually read it, it was a big nothing. Bolton could be a big nothing too.

They know Trump fired Bolton and that Bolton then wrote a supposed “tell-all,” or however one wants to characterize his book. Bolton has a huge ego, which drives him as much as anything. I wonder how exam and cross exam will go, and who will do the questioning.

The question they’ll need to ask is, what would Bolton actually say? His book is not out yet, and no-one who actually has hands on the book will confirm or deny what it is alleged to say, just an anonymous leak. From a publisher’s standpoint, it serves nothing to quell the controversy over the book. Right now, every left wing TDS sufferer is going to rush out and buy it the moment it hits the shelves, and if they find out the real book is the opposite of what the news reported before they get it, they’re going to bail on their pre-orders.

I can easily see him coming back with a statement that, either it doesn’t say was the news reported, or, if it does, he was not the one who put that in there.

#metoo was an attempt to get Trump and so far about 99 dems have gotten thrown under the bus instead. Weinstein will walk and Epstein didn’t kill himself. You would think by now the left would start to take unintended consequences seriously.

You can call John Bolton too (testimony will kill his book sales in a month).

Yes. We need to hear from the whistle blower and the IF how this whole thing started.

Did they change the rules retroactively just so they could launch this investigation?

Did the whistle blower actually have any knowledge of the call in question? If not, who fed him false information to start it off? Serious wrongdoing has happened here, and the public deserves to know.

Trey Gowdy suggested that they should call Barack Obama to testify as well.

they should have witnesses, the ones the House Dems call and the ones the Republicans wanted but the Dems would not call

I’d gladly trade seeing Bolton plug his book from a Senate impeachment proceeding for also getting to watch the Bidens, the “whistle-blower’ and Schiff-ty testify.

This is entirely the Republicans’ fault, more precisely, McConnell’s fault. Opening up the process to the possibility of a 51% vote where he loses control of the proceedings is unforgivable.

This exactly how this always happens. There is always a gang of Republicans who have exactly the right number to make it close. Gang of Eight, Gang of Six, Gang of ????,/// In the end, they always always always get that one last vote to surrender to the Democrats. We should NOT be here. This should have been over already.

Even if Trump prevails, it just underscores why purging the Senate of RINOs is so necessary once Trump gets re-elected and gets the Republican House he is working so hard to get.

Phil, McConnell never had 51 votes to shut it down. The RINOs (Romney, Murky, Collins, etc.) could always “cross the aisle” as soon as the articles were sent.

I won’t be surprised if they give the rats a majority even if they don’t get to 2/3.

He wrote the rules.

Opening up the process to the possibility of a 51% vote where he loses control of the proceedings is unforgivable.

Huh? What other possibility is there? How do you suggest he could have avoided it?

Who wrote the rules again?

To answer to your question of ‘who wrote the rules’ is easy.
Some unnamed staff member took the rules from the Impeachment trial of Clinton and tweaked them, at the direction of McConnell, in order to achieve passage by a majority of the Senate.

The thrust of your question, in the context of your posts above, vastly overstate the power of the Senate majority leader; McConnell. Sure he can apply pressure to his caucus but at the end of the day he has one vote just like every other Senator. He lacks the power to simply declare that ‘these are the rules’.

Who wrote the rules? 51 senators, that’s who. And 51 senators can change them. There is nothing McConnell could ever have done to change that.

Two things I want to make Bolton testimony more acceptable: 1) his book should be withheld until after the trial is over. 2) Republicans should read the entire text on the Senate floor.

Hate to be obtuse, but I can’t connect the “DNC Staffer” noted in the headline. I guess I haven’t been paying enough attention.

Could someone clue me in?

Seems like Schiff would have copy of Bolts book from col vindman thru his twin bro.

There are still 4 Dem Senators who are crapping their pants over anything that keeps them from getting out and campaigning next week.

I am not sure that Pandora’s box is the correct analogy, this seems to be closer to ‘lets make a deal’ with Monty Hall asking you to choose between door 1, door 2 etc.

Personally, I believe a better outcome following the 16 hour period for questioning would be a simple dismissal of both articles as not rising to the standard of impeachable offense due to failure to list a crime and being unconstitutionally vague. This gives enough cover to RINO and would serve as a rebuke to the HoR.

Then the Senate can get back to confirming judicial appointments instead of wasting it’s time on this farce.

I consider that the only “good” outcome for the country, as dismissal would clearly impede use of this strategy against future presidents.

So where is that investigation Graham promised after the Kavanaugh circus? Talk, talk, talk, talk. It is so easy for these polymorphs to get into the good graces of too many spineless “conservatives”.

Shut this down right now!!!!

Changed your tune awfully quick there didnt ya sport ??

Won’t the testimony be in the form of depositions?

No witnesses. Period. Not knowing anything more about the Bidens than we now know is a price Rs should pay readily for closing this thing up. No witnesses, Bidens included and for damned sure no more closed door hearings, classified or not; another reason for not admitting witnesses. (Didn’t we have enough with with secret Democrat meetings in the House basement during the ‘investigation’?) He’s right about the “half assed” job the House did, they can live with it, there’s no reason for the Senate to clean it up. Vote, shut this thing down. Republicans should make the Democrats live with their “half assed” work-but then, Republicans. If someone wants to know more about the Bidens, let them do it on their own dime and time, not as part of the impeachment. Finally, will someone please primary Susan Collins and Lisa Murkowski into the sunset? Get rid of them.

Does anyone REALLY believe him? The Senate is supposed to be a jury, not investigators. Do they REALLY want to set this precedent? These guys are stupid.