It’s only a ceremonial role. 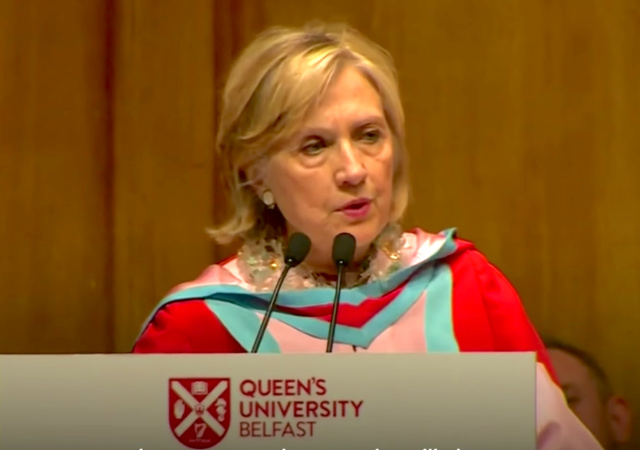 Chancellor is a ceremonial role. Hillary’s responsibilities include presiding over graduation ceremonies, ambassador for QUB abroad, and “advisor to the vice-chancellor Prof Ian Greer and senior management.”

Clinton will serve as chancellor for five years:

Mr Stephen Prenter, Pro-Chancellor and Chair of Senate, the University’s governing body, said: “I am delighted that Queen’s has chosen Hillary Clinton to be its new Chancellor. Secretary Clinton has made a considerable contribution to Northern Ireland and as an internationally recognised leader will be an incredible advocate for Queen’s and an inspirational role model for the Queen’s community.”

Accepting the position, Secretary Clinton, said: “It is a great privilege to become the Chancellor of Queen’s University, a place I have great fondness for and have grown a strong relationship with over the years. The University is making waves internationally for its research and impact and I am proud to be an ambassador and help grow its reputation for excellence.”

How can she preside over graduation ceremonies? Are there only a handful of students? Because there’s no way she’d be able to stand in public for a protracted endeavor.

I bet she can slither with the best of the serpents.

notamemberofanyorganizedpolicital in reply to NotKennedy. | January 2, 2020 at 3:57 pm

The Irish are going to need another St. Patrick……

Once the Clintons establish their nest…….

How many people are able to get away with so many crimes? It’s something lesser criminals aspire to.

notamemberofanyorganizedpolicital in reply to UnCivilServant. | January 2, 2020 at 3:45 pm

How much are the Hopeless Queens Paying her?

Can’t be less than a million a year. Snark.

walls in reply to notamemberofanyorganizedpolicital. | January 2, 2020 at 3:50 pm

Exactly. Plus I bet she gets all the Irish whiskey she can swizzle.

She is protected by coconspirators.

Do we have an extradition treaty with Ireland?

notamemberofanyorganizedpolicital in reply to healthguyfsu. | January 2, 2020 at 3:46 pm

LOL
“Rolled” Model,
as in the Bums got Rolled!

Hillary’s in town? Well, no permanent damage, maybe, but be sure to change your computer passwords, and count the spoons. And sending your daughters out of town wouldn’t hurt.

Appointing Hilary is a clear “tell” of a failing institution. Look at what happened to the State Department.

They’re still diligently looking for the $6 billion they lost during Hillary’s tenure.

notamemberofanyorganizedpolicital in reply to SeekingRationalThought. | January 2, 2020 at 3:47 pm

The Queens better hide their china and silverware!

Great things happen with Chardonnay by the box!

They better watch out that the Troubles don’t start up again!

7.7 billion people on Earth and the best Queens can come up with is Hillary Clinton, a scheming alcoholic and Shakespearean villain of the most course sort. No one actually likes the sclerotic, foul-mouthed old hag.

So, where’s the grift?

Looks to be an amazingly well preserved cadaver. What’s one of those go for now?

Maybe someone should tell the Provost that hillary NEVER gives anything. She was born a Taker and that’s what they can expect from her.

I’m predicting OVER 50 comments on this thread.

notamemberofanyorganizedpolicital in reply to walls. | January 2, 2020 at 3:59 pm

Mary really knows how to keep us entertained!

Looks like Hillary’s facial swelling and inflammation have diminished. She doesn’t look a day over 75,

Queens must be owing something. Perhaps they were late on their donations?

What idiot would send their child to that school after the most incompetent and corrupt waste of life has been appointed its head?

….or why Western Civilization’s doomed.

Why? Did they need a bat for a belfrey.

Maybe, but the bottom feeding hacks running the place probably needed the $$ they got to get her this pathetic position.

We’ll probably find out she searched the world to find people this hard up for some money.

She is not getting paid?

Then the obvious question is: where is the soft money? Is she getting stipends, per diems, honoraria, the use of aircraft, the use of homes or lodges, etc.?

Is she trying to drive up contributions to some foundation she controls?

Hey y’all. Know who else was a Chancellor?

Did they tell her the name of the university doesn’t mean she’s been crowned?

Imagine getting a resume from a putz from this school??

There must be an opportunity for graft here.

Nothing like having a crook as your Chancellor. What an example for the students.

Her whole life is a “Ceremonial role.” Especially that sham marriage. How can any honest institution allow this horrible crooked politician to play an active role in anything? Disgraceful!

Perhaps some Sinn Fever will do the world a favor and blow her head off.

Secretary Clinton has made . . .

And for the life of me this is one thing that really pisses me off. Referring to Clinton as “Secretary”. She isn’t “Secretary” anything at this point. She’s simply an unemployed, two time loser. But “Secretary”? Nope

Clinton doesn’t have a a “Secretary” position. She doesn’t even have a job with the federal government any longer. So why in the hell do journalists still refer to her as “Secretary”.