A different kind of reset button. 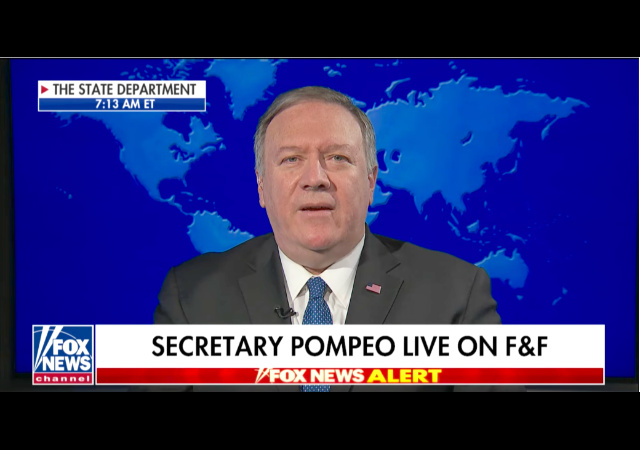 Secretary of State Mike Pompeo told Fox & Friends that President Donald Trump’s order to strike and kill Iranian terrorist Qassem Soleimani proves that he will do everything he can to protect Americans.

Pompeo stressed that the Trump administration has shown military “restraint” in the face of dozens of attacks directed by Iran and its proxies against American interests, culminating in the death of an American contractor in Iraq last week.

“I think the Iranian leadership understands President Trump will take action. … We made very clear that these responses would be swift and decisive. We have now demonstrated that. I hope the Iranian leadership will see that and see American resolve and that their decision will be to de-escalate and take actions consistent with what normal nations do. In the event that they do not and they go in the other direction, I know that President Trump and the entire United States government is prepared to respond appropriately,” said Pompeo.

Pompeo said the strike was carried out to prevent an “imminent attack” by forces directed by Soleimani.

“He’s got hundreds of American lives and blood on his hands. What was sitting before us was his travels throughout the region, his efforts to make a significant strike against Americans. There would have been many Muslims killed as well, Iraqis and people in other countries. It was a strike that was aimed at disrupting that plot, disrupting further aggression and we hope, setting the conditions for de-escalation as well,” he said.

“We didn’t send pallets of cash to the Iranians. We didn’t pay for hostages. We didn’t create a deal which would have given them a clear pathway to a nuclear weapon. We have taken a very different approach. We believe it’s the one that will ultimately lead to success and stability in the Middle East,” he said.

Good luck getting Iranian citizens up in arms to fight any war the Ayatollahs declare against the US. We aren’t killing them. The Iranian regime is. That’s the problem with murderous totalitarian regimes.

Still waiting for that sitzpinkler Macron to weigh in on this. Maybe now American energy sources will make sense? Or maybe Germany will argue on their behalf to Putin?

I am not interested in another massive land war in the Middle East. I don’t believe our president is either. This was a very effective, measured and righteous surgical strike. It sends a message that we do still have actionable intelligence and the will to use it. We couldn’t have eliminated an enemy who deserved it more.

Pallets of cash or drone a top level terrorist. It is almost as if those two choices would reveal a president who hated America from a President who loves America.

I never bought the argument that Iran should get the cash back, in that they flat out stole a great deal of American assets.

That money was owned to the government of the Shah of Iran, not the Republic Theocracy of Iran that overthrew them.
It never should have been given to this regime.

“We didn’t send pallets of cash to the Iranians. We didn’t pay for hostages. We didn’t create a deal which would have given them a clear pathway to a nuclear weapon. We have taken a very different approach. We believe it’s the one that will ultimately lead to success and stability in the Middle East,” he said.

From the cheap seats in Missouri, I have this to say: Pompeo isn’t looking to be some junior senator from toto-land Kansas. He’s campaigning for POTUS 2024.

I would be fine with the President lobbing a few bombs at the Ayatollah as well. It’s time for him to meet his maker and quit causing so much misery here.