Everyone laugh because Warren is dead even with Trump!

An ABC News-Washington Post poll found out that the thriving and robust economy has helped President Donald Trump against the 2020 Democrat presidential hopefuls.

Buried lede: The Democrats lead shrink a lot when you only count registered voters.

Once again reality escapes the Democrats and left. People vote with their wallets. They want jobs and money in their pockets. They want to be able to provide for their families. From the poll:

Key to Trump’s opportunity is a rise in economic confidence. One year before he took office, 63 percent of Americans said they were worried about maintaining their standard of living. Today, 43 percent say so, a broad 20-point drop in personal economic uncertainty.

Trump, moreover, gets a share of credit; as reported Friday, 56 percent approve of his handling of the economy, up 10 points since early September to a career high.

The result is a tighter contest for the presidency in this poll, produced for ABC by Langer Research Associates. Among all adults, Trump trailed top Democratic candidates by doubledigits in the fall; he’s now cut those margins in half. Among registered voters, moreover, he’s now running essentially even in head-to-head matchups.

While most of the Democrats lead Trump the economy has helped cut down their lead.

Former Vice President Joe Biden leads Trump only 50% to 46%. Biden had a 17-point lead in this poll only three months ago. 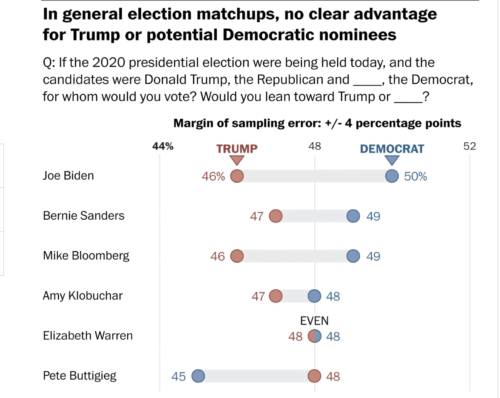 Sen. Bernie Sanders (I-VT) only has a two-point lead over Trump. Trump is dead even with Sen. Elizabeth Warren (D-MA)! Even Sen. Amy Klobuchar (D-MN) has a lead over Trump.

But as the poll said the difference shrinks when you only count registered voters.

The poll also showed that 49% of Americans think Trump will win in November compared to 43%.

That’s probably because 94% of those who voted for him in 2016 plan on doing so in November.

But the fact remains that the majority of Americans just want jobs and money in their wallet. All this social justice crap and impeachment pales in comparison to our daily lives.

For we wrestle not against flesh and blood, but against principalities, against powers, against the rulers of the darkness of this world, against spiritual wickedness in high places. Wherefore take unto you the whole armour of God, that ye may be able to withstand in the evil day, and having done all, to stand.

Has early voting started yet?

Mostly for those who passed away years ago. I’m sure the democrats have trunks filled in many of their personal vehicles they’ve forgotten about at the moment.
Rest assured they’ll suddenly recall they have them in November.

As I understand it, conservatives are much more likely to refuse to answer pollsters’ questions than liberals. If this is the case, polls are unreliable.

notamemberofanyorganizedpolicital in reply to blacksburger. | January 27, 2020 at 5:46 pm

Plus they Way Oversample DEMS…….

Good. Makes the losses even harder with more liberal tears.

When I’m depressed, I remember the American people left Hillary Clinton standing at the alter under the biggest glass ceiling in North America with 1,200 lbs of fireworks and 10,000 balloons. I find that helps a lot.”

The difference would probably shrink even more if they just counted likely voters.

After 2 weeks, it’s clear that Democrats have no case for impeachment. Sadly, my colleague @SenatorRomney wants to appease the left by calling witnesses who will slander [email protected]
during their 15 minutes of fame. The circus is over. It’s time to move on! #gapol

“….The main significance is this: getting liberal/globalist elites to respect democratic outcomes even if they don’t like them. This is an important precedent…”

it is a near certainty that the world economy is going to take a big hit from the Chinese Corona virus and that Trump will be blamed for it all.

Democrats Warn That American People May Tamper With Next Election