Pelosi Picks Schiff, Nadler, and Five Others as Impeachment Managers During Senate Trial

Pelosi Picks Schiff, Nadler, and Five Others as Impeachment Managers During Senate Trial

Of course she chose Schiff and Nadler. 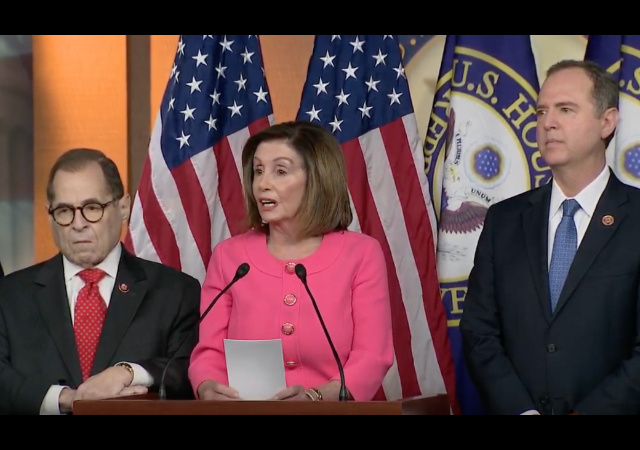 Speaker of the House Nancy Pelosi named seven representatives to serve as impeachment managers during the Senate trial.

Today, I have the privilege of naming the Managers of the impeachment trial of the President. #DefendOurDemocracy pic.twitter.com/Y2613Ni3pC

The House should vote to send the articles of impeachment against President Donald Trump and approve the managers later today.

What’s the role of the managers? USA Today explained:

Congressional rules specify that managers, members of the House whose roles are similar to prosecutors, are tasked with presenting the case for impeachment to the Senate. The trial will determine whether Trump should be convicted and removed from office. Removal requires a two-thirds majority vote, or 67 votes.

Pelosi picked members of this committee except for Crow. He sits on the Armed Servies Committee and the Small Business Committee:

The managers have varied biographies: Schiff was a federal prosecutor; Demings was a police chief; several are attorneys, and Lofgren was a staffer on the House Judiciary Committee during the Nixon impeachment and a House member during the Clinton impeachment.

“This is about the Constitution of the United States and it’s important for the president to know and Putin to know that American voters — voters in America — should decide who our president is,” Pelosi said at a press conference with the managers.

“There can be no full & fair trial in the Senate if Leader McConnell blocks the Senate from hearing witnesses and obtaining documents President Trump is covering up,” Pelosi said in one tweet.

“The President has fought tooth-and-nail to keep thousands of documents away from the public,” the speaker said in another tweet. “And no wonder — each time new pieces come out, they show President Trump right at the center of the effort to pressure Ukraine to investigate his political rivals.”

Trump will choose his team to defend him in the trial. People expect him to pick White House counsel Pat Cipollone to lead the team and his personal lawyer Jay Sekulow.

There were only 3 stooges not 8

Since Pelosi is staying in the House, it’s only seven, which is a totally appropriate number for mental dwarfs.

(With due apologies to the physically height-challenged)

Russia Russia is NOT going away. They now leaked Russia hacked Ukrainian Burisma gas company. LOL What a joke. Do you see where this is headed? This is how money laundering/corruption of Bidens, Paul Pelosi, John Kerry and family will be covered up. Their best attempt to muddy the water will fail. Trump has punched huge holes in the swamp, swamp is swirling in the toilet. 2+2= Why the many relentless, unfounded attacks against Trump since day one? There is an average of 2-3000 sealed indictments every year. The count is now over 139,000 <<not a typo.. Get out your popcorn and enjoy the show.

It’s really hard for me to think of a less impressive group.

Nadler wanted in upon hearing that lunch was included.

LOL Nadler has his pants pulled up to his armpits now. If he pulls them up a little bit more hopefully he will disappear

Soon, he’ll be unzipping to blow his nose.

Thanks a lot 94C. Although very funny I didn’t need that visual stuck in my head. Two arms sticking out the front pant pockets. Only two eyes showing above the belt line. Thanks ROFLOL

I’m not feeling at all well today; I needed the laugh. Thank you!

And McConnell agreed to allow time for frequent nappies…

notamemberofanyorganizedpolicital in reply to Pete. | January 15, 2020 at 1:21 pm

Pete in reply to notamemberofanyorganizedpolicital. | January 15, 2020 at 1:53 pm

Nappies as in rests, or as in the changing thereof?

Turning the USA into the world’s biggest joke – congrats Nancy

notamemberofanyorganizedpolicital in reply to paracelsus. | January 15, 2020 at 12:21 pm

May I have the envelope, please?

And the managers are,

it’s important for the president to know and Putin to know that American voters — voters in America — should decide who our president is
Wow, that’s rich!

And I’m actually surprised she chose anyone who wasn’t from NY or CA.

Pelosi keeps going on about a “fair trial”. but I don’t think it means what she thinks it means. A “fair trial” means fair to the defendant. IOW, Donal Trump.

I listened to her announcement while driving. It was borderline incoherent. She was quoting Longfellow and other poets and making references to the importance of time which made absolutely no sense.

I was truly bizarre. The deranged rantings of a befuddled elderly woman.

“ The deranged rantings of a befuddled elderly woman.”

Mrs. Clinton was there as well?

Why did she pick people that nearly every Republican in the Senate will view as hyper-partisan hacks, incapable of telling the truth?

Answer: Because she doesn’t care how the Senate votes. She just wants TV cameras focused on the attacks on Trump.

Alternative Answer: She’s such an incompetent leader that it never occurred to her that who she put on the prosecution team might matter.

Another alternative answer: She’s senile. She has no idea who or what was just announced. She’s just reading the teleprompter and hoping there will be ice cream at dinner.

And the correct answer is…..

Pudding and jello (shooters)… No ice cream for people with tiny, little brains that will freeze instantly.

The worst part of this disgusting circus is the group of potential Senatorial Republican defectors.

notamemberofanyorganizedpolicital in reply to DuxRedux. | January 15, 2020 at 12:24 pm

Makes it easier to vote out those RINOs in November, no?

The Friendly Grizzly in reply to notamemberofanyorganizedpolicital. | January 16, 2020 at 9:11 am

Isn’t it a little bit late to get people lined up to primary these people?

you are only talking about a max of 4, at the most

the Republucans, if they drag the witness list out, should be able to recall the House’s prior witnesses and get them on cross to answer the questions Schiff-face blocked

She is just asking for it, isn’t she?

notamemberofanyorganizedpolicital in reply to Arminius. | January 15, 2020 at 12:27 pm

Can we drop a house on her already?

I normally don’t recommend violence against, well, anybody. Especially women..

I am confident Cocaine Mitch can resolve the situation in a.much more painfull way than resorting to actual physical violence against Pelosi.

What, no Alcee Hastings the impeached and convicted judge?

Where’s the Asian, or Muslim, or Iranian?!? Racist impeachment!

Pelosi selected Schiff for brains in an attempt to block him from being called as a witness.

The more Trump-deranged the managers are, the more entertaining it will be.

Will these clowns be under oath? Or do they qualify for the Hillary exception?

That’s a really good question, that could be expanded to: Are lawyers ever under oath when acting as prosecutor or defense counsel?

Can someone explain to me what the articles of impeachment presented have to do with Putin or Russia?

Or is it just Nancy’s senility again raising its ugly head?

notamemberofanyorganizedpolicital in reply to Sailorcurt. | January 15, 2020 at 12:52 pm

Apparently Pelosi brought up Russia because she views impeachment as a way to undo the election, which never should have had the results it did, because RUSSIA!!!1!1!!! In other words, ultimately, it doesn’t even matter what Trump did or didn’t do while President; the Democrats and the Deep State just want him gone.

Of course, we knew that.

Surprised not to see AOC and other members of the Squad left off this list.

Edit fail.
I meant to say I *am* surprised they’re not on the list.

Given that AOC and her cohort are a bigger thorn for Dems than for anybody else and the fact that it appears they’re may gerrymander her out of her district, I’m not.

What better way to get rid of them than to associate them in people’s minds with this farce of an impeachment?

Because they’d also be the face of the Democrat Party, which is the last thing that Pelosi wants.

It almost doesn’t seem fair that Pelousy’s not giving Hank “Guam will tip over if we send more troops there” Johnson and that Florida numbnuts that wears the plastic cowboy hats the opportunity to shine. Where’s the intellectual diversity? Stoopid people have feelings too…

What, no “Kentucky Fried Chicken” Steve Cohen, the Twit from Tennessee, amongst the managers? Why didn’t he make the cut?

Nancy has selected a gang, none of whose members can shoot straight, as impeachment managers. Hilarity should ensue.

If Schiffabrains and Nadless had any smarts at all they would decline. Seems to me she’s going to use them as patsies when this finally goes down the drain.

In contrast to the Clinton impeachment, I would not be surprised to see that these eight are merely figureheads, much of the actual prosecuting will be done by the lawfare attorneys Pelosi brought in to help.

Given the rather mediocre quality of these managers, I hope Trump selects a group of real sharks to tear them apart.

What I would loooove to see is Adam Shifty forced to testify under oath – if that’s even possible when he’s a “prosecutor” under these circumstances. For years he’s repeatedly claimed personal knowledge of easily verified proof positive that Trump colluded with Russians to cheat and steal the 2016 election. Than there’s his claim that he had no knowledge of who the Ukraine “whistleblower” was – when it’s almost certain his staff – if not he himself – met with him about this prior to the fellow filing his third hand claims.

It would be a “stain that would never go away” if Schiffty was forced under penalty of perjury to either put up the “proof” or admit he lied repeatedly and knowingly.

Forgive me, but I don’t remember the term impeachment manager from Clinton’s impeachment. Exactly what are they supposed to do, and what is their power?