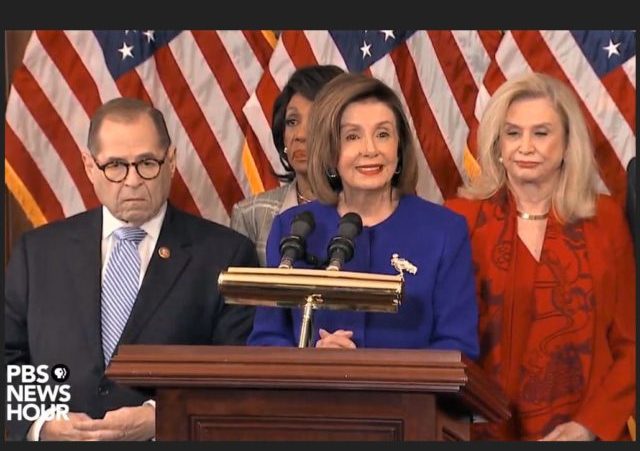 Politico reported Speaker of the House Nancy Pelosi declared “the House will vote on a resolution to transmit the articles of impeachment to the Senate.”

Pelosi told the Democrats her decision during a private caucus meeting on Tuesday.

She did not say which Democrats will act as impeachment managers during the impeachment trial.

Pelosi held onto the articles of impeachment after the House voted on them in December. She wanted to know all the details of the trial before she gave them to the Senate.

Senate Majority Leader Mitch McConnell held his ground as he said over and over that Pelosi cannot dictate what happens in the Senate.

Many Senate Democrats came out against Pelosi, criticizing her decision.

Who’s the blonde in the red dress standing there behind Pelosi? I don’t recognize her.

That’s the beautiful(ugh!!)Rep.Maloney of N.Y.

She looks drunk and Nadler looks like a South Park character.

I forgot to add Maxine.

She looks like a wax museum sculpture that got left in the sunny window too long.

Nadler IS a South Park character.

Why do they need to vote on this? Isn’t it part of the impeachment vote they already had? What if this vote fails — they voted to impeach, but not prosecute?

I thought the same thing – What’s there to vote on. They passed the articles and all she needed to do was assign managers to walk it over to the Senate probably with armed guards and a drum and fife corpse. Maxine Waters can dress as a drum majorette.
.
Question, if she has some kind of vote for whatever and she can’t get 50%, does that mean that there was no impeachment?

has nothing to do with sending the articles to the senate, madame queen had a few vote rebellion and she needed to correct that, one more thing there will be a republican vote too, the democrat that became a republican

And most Americans could not care any less, rightfully.

Isn’t it part of the impeachment vote they already had?

The operative phrase being “… and that the following articles of impeachment be exhibited to the United States Senate . . .”.

Though I suppose that traitor Pelosi and traitor Schumer would argue that they didn’t include a time imperative in that phrase so as long as they eventually send it to the Senate they would be in the clear.

The Senate should do whatever the legislative equivalent is to crumpling the fake articles into a ball and hitting nancy between the eyes with them. I know I’m broken record on this, but doing anything other than S-canning these joke articles will invite more of this garbage in the future. Hang these sham articles around nancy’s neck for all eternity.

2smartforlibs: It’s already in HR 775 to take it to the Senate.

That would be H.Res.755. H.Res.775 is for “Recognizing and honoring Smokey Bear’s 75 years of service to the United States”.

It would be typical of the incompetent House Democrats to send the wrong bill to the Senate.

“So you impeached Smokey Bear?!”

Their version of “Honest, the check’s in the mail!”

Through these actions, President Trump sought to arrogate to himself the right to determine the propriety, scope, and nature of an impeachment inquiry into his own conduct, as well as the unilateral prerogative to deny any and all information to the House of Representatives in the exercise of its “sole Power of Impeachment”. In the history of the Republic, no President has ever ordered the complete defiance of an impeachment inquiry or sought to obstruct and impede so comprehensively the ability of the House of Representatives to investigate “high Crimes and Misdemeanors”.

Crawford: Why do they need to vote on this? Isn’t it part of the impeachment vote they already had?

The House has to appoint the impeachment managers who will actually deliver the articles to the Senate.

Gonna be interesting to say the least if and when they actually do send the Articles over to the Senate.

Lucifer Morningstar: Too bad the House screwed the pooch on the investigation in their haste

Trump explicitly defied the House impeachment inquiry, which forms the basis of the second article of impeachment. The Senate can still compel Trump’s cooperation, in order to safeguard congressional prerogatives.

And what happens when co-equals have a disagreement? They resolve those differences through the third branch of Government, the judiciary.

It’s not our fault Democrats were in a hurry to get to their pre-determined position of guilty as quickly as possible.

Congress can no more force Trump to do something than Trump can force Democrats to not be crazy.

mailman: And what happens when co-equals have a disagreement?

There wasn’t a disagreement. The president defied the impeachment investigation.

mailman: Congress can no more force Trump to do something than Trump can force Democrats to not be crazy.

The president has taken an oath to “preserve, protect and defend the Constitution of the United States.” As he defied his oath, he was impeached.

don’t think it has to do with timing or amount of time, I think there is enough body of evidence that they would not have prevailed, and they know it.

The defiance charge comes from Trump’s refusal to comply with the House’s “lawful” subpoenas. If the administration doesn’t believe they are lawful and refused to comply on the basis of executive privilege, the two sides negotiate and try to come up with a compromise. The other option is to take the case to federal court and attempt to force compliance. The house didn’t want to waste time with either remedy and went right to “Obstruction of Congress”. That’s why that article of impeachment is DOA.

Sanddog: If the administration doesn’t believe they are lawful and refused to comply on the basis of executive privilege, the two sides negotiate and try to come up with a compromise.

Trump defied the process, calling the impeachment a hoax and refusing to cooperate. If the Senate wants the truth, they are in a better position to enforce compliance.

Could be Trump called the impeachment a hoax because the whole process was based on hoaxes and perjured testimony. WHich would make it a hoax.

Precisely. As a non-lawyer, I’m starting to believe the second article of impeachment will be tossed right off the top. Can you imagine a criminal case where the prosecution requests vast numbers of records without any justification or any relation to the case, and when the defense questions it, they pile on more charges without even attempting to enforce a subpoena?

Pelosi has a dripping ball of glitter, glue, Popsicle sticks, and wire, and is trying to claim that it is a work of art that deserves to be exhibited in the National Gallery.

(Yes, I know. It is “Modern Impeachment” much like “Modern Art.”)

gospace: Could be Trump called the impeachment a hoax because the whole process was based on hoaxes and perjured testimony. WHich would make it a hoax.

Said every defendant ever. That doesn’t make the subpoenas go away.

So they don’t even know that the period always goes inside the close quote? And they are governing us.

Why doesn’t Nancy just dispatch one of her flying monkeys to fly the papers over to Mitch?
I mean, that’s what they’re there for… right?

Is she always surrounded by ugly freaks?

The beginning of the “Birther movement” seemed to come from Obama’s literary agent (incorrectly) claiming that Obama was “born in Kenya”.
When Obama haters latched on to it, Obama decided to “dangle the carrot” long after anybody should have cared. It became as he would call it “a distraction”. A benign distraction.
Frankly, I don’t think Trump missed that. Trump’s tax returns and, yes, John Bolton are “a distraction” .. an empty pit.

Now, wait.
They were supposed to send them today.

How about they send them next October??