After Democrats wrapped up by throwing insults at Trump and Republican Senators, Trump gets his chance to push back. 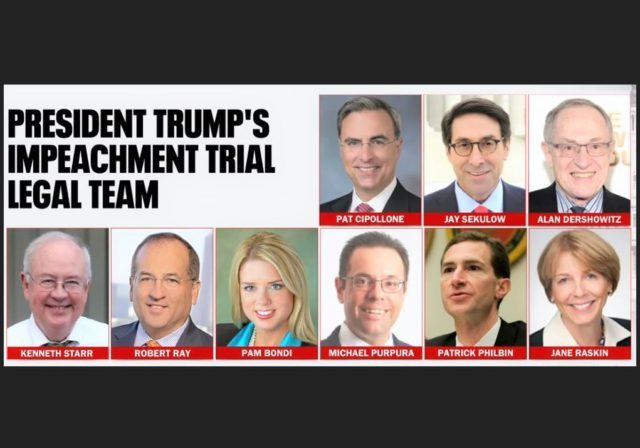 Trump’s defense starts today in the Senate impeachment trial. For a preview of the arguments, read Trump’s Trial Brief.

Democrats wrapped up last night by name calling, with Jerry Nadler calling Trump a Dictator, and Adam Schiff quoting an unsourced CBS New report that Republican Senators getting their heads put on a pike if they vote against Trump, angering many Republican Senators at Schiff’s insulting conduct.

Republican Senators are showing signs of having grown backbones. Let’s see if it lasts.

It is expected that Trump’s defense will go for a 2-3 hours today, then a full day on Monday.

“For all their talk about election interference, that they’re here to perpetuate the most massive interference in an election in American history, and we can’t allow that to happen.”

The presentation is focused to what the Democrat House managers did not tell the Senate, including numerous quotes from witnesses showing that the snippets read by Schiff et al. were misleading and contrary to the truth of what the witnesses said.

"Those were the words of Dr. Hill you did not hear."

Sekulow continues theme being laid out by Cipollone, Purpura of things House Impeachment Managers did NOT tell Senate…or American people.

Jay Sekulow: "This case is really not about presidential wrongdoing. This entire impeachment process is about the House managers' insistence that they are able to read everybody's thoughts, they can read everybody's intention." https://t.co/vLRdrlfUX9 pic.twitter.com/aR8jhMqcPB

Incredible—the President’s legal team just played this video on the Senate floor. The entire Senate just saw the Democrats’ central witness admit he had absolutely no evidence for the impeachment allegations.

That should be game OVER. https://t.co/C8NjcbHotQ

Trump attorney Jay Sekulow holds up a copy of the Mueller report in his opening argument, arguing that House impeachment managers are now trying to "relitigate the Mueller case." https://t.co/AEw0I0JGrL pic.twitter.com/hioXWhtJ6q

Dems claim President Trump’s motive was political and therefore corrupt. I don’t suppose its possible that the Democrat impeachers are themselves motivated by politics? https://t.co/AwA4ekekAA

“Briefs” would be the right word. Not much need to go all in like the Dems did. Simple refutation, explanation and summarization. The public has had enough. Senator’s rear ends have had more than enough.

Schiff and Nadler couldn’t dial back the crazy. Not even for a few hours before the Senate. Yes, we’ve noticed.

OMG, just the outline of the trial brief is a slam dunk!

I am live-tweeting the trial with others who also thinks the outline of the program is brilliant — and hits the House Managers at their weakest spots.

OMG! They are bringing Schiff into the trial via video. This is really MUST SEE TV! ROFL!!!

Just watching it now and I said the same thing when they played the Schiff video. “Oh my God!!!”

What a sorry example of government at the Federal level.

notamemberofanyorganizedpolicital in reply to WestRock. | January 25, 2020 at 1:32 pm

Yes, because it’s all overflowing with stinking Schiff!

Hard to blame him after the Defense put in a couple hours.
Can you imagine being so horribly slaughtered right in front of the entire Senate, and the Defense not even breaking a sweat?

The Trump Team is literally putting the House Impeachment Process on trial.

Taxpayers should be mad as hell about staggering costs associated with both the Russia scam and now the impeachment scam. In the end we are all paying for this. Heads need to roll, scalps taken (and since I am 1/8 native, my comment is politically correct) 🙂

Too bad that downvoter can’t be downvoted.

notamemberofanyorganizedpolicital in reply to JusticeDelivered. | January 25, 2020 at 2:22 pm

Don’t forget the Billion$ of Deep State Budget that is kept off the “books” and kept secret!

I am not watching, but have read that Jay is in his head and not delivering?
Thoughts?

Jay was great. Everyone has been amazing…quite professional and succinct. Find video clips or get on CSPAN and you will see.

I wonder if some people were expecting him to be like he has been when speaking to the media during breaks (ie. much more animated and punchy), and were disappointed that he wasn’t. But if he was, the media would have latched onto that (He’s a bully! He is undignified!)

Patrick Philbin now has the nickname Undertaker. He is burying the Articles of Impeachment.

I’m at the Cleveland Hopkins Airport with gawd-awful CNN on in our departure gate. Their hatred is well known but hearing how they ripped apart Trump’s legal team just now is truly sick. Hard to listen to.

The good news is that while here in Cleveland we placed my mother’s ashes next to my dad’s, had a grand tour of the Rock and Roll Hall of Fame, ate a fabulous dinner in Little Italy, and saw the hysterically funny Joe Machi live at a downtown comedy club. All to the good!

First, last night. I watched none of the house managers; let the senators suffer the fools alone. However, I did watch last night’s local news from a midwestern town with an audience of half its state (based on the way they cover the weather during every broadcast).

What stood out to me is that here we were on the closing night of the house democrat’s OH MY GOD impeachment presentation and the impeachment wasn’t even mentioned until eleven (11) minutes into the 10:00 news (traditional 11:00 news back east). The first eleven minutes of everything from a local traffic accident to Boeing to an explosion in Texas…..and NOTHING about the impeachment. Then mid show they played a ~1:30 tape from its national news master….and then back to anything but the impeachment.

Bottom line? We’re having only the 3rd impeachment in our nation’s history, with congress holding marathon hearings to potentially remove a president from office….. and no one cares. Everyone out here knows it’s all hooey. And that was before Schiff for brains’ had his head-on-a-pike fa-paux that completely lost the republican side of the senate.

Republicans should have started Saturday off with a motion to dismiss. No one would notice or care.

As for today’s defense testimony. Schiff for brains and Nadler were probably uncomfortably schifting in their seats this morning. Each of the defense team made their points without repeatedly regurgitating each other’s talking points. Well done.

I think Schiff is a little bit jealous and projecting. Were someone to put his head on a pike there would be no neck to buttress it with.

If someone put his head on a pike it would double his neck size.

John F. Kennedy lowered taxes, opposed abortion, supported gun rights, and believed in a strong military. He was a proud Democrat. If he was still alive, he would be a Republican.

Notice how far the left has shifted?

notamemberofanyorganizedpolicital in reply to Taxpayer. | January 25, 2020 at 1:02 pm

But the DEMS still trot out all the Dead Kennedys every time they gets a much deserved defeat.

Just since 2016 they’ve published enough special mags about all the Kennedys to deforest several continents.

Even the DEMS holy cow, Jackie, had to be called out for her LIES.

She was buying French clothes to be worn for Jack’s inauguration, tearing out the French labels and sewing in American ones.

But Eleanor Lambert called her out for her lies.

Go to about 36 minutes in for the documentation.

Jack Klompus in reply to notamemberofanyorganizedpolicital. | January 25, 2020 at 2:35 pm

At least the Dead Kennedys put out a couple of good albums.

Well, I don’t know . . . 1876 was pretty bad, not as blatant but in the end more seismic. Maybe. And 1800 was spectacular, but that was a screwup by the electors, and the presidential election was a tie. Both of these ended up in the House; a vision of sugarplums which I imagine is enough to put Nan in a state of diabetic shock.

…Both Obama And Biden Could Be Relevant Witnesses In Trial

Lucifer Morningstar in reply to notamemberofanyorganizedpolicital. | January 25, 2020 at 4:17 pm

I’m so tired of listen to Trey Gowdy. He was all talk and no action when he was a representative and he’s all talk and definitely no action now that he’s retired from the House. He’s just another talking head that can be ignored as irrelevant.

I was traveling today [flying] and didn’t get to see anything. However, if the above is true, this is extreme gross prejudice on part of the OTA networks ABC, CBS, NBC, PBS, as these networks showed coverage of the full democratic hearings. Can anybody confirm if ABC, etc. showed these hearings? If not, I will lodge a protest with the FCC.

How timely and purely Democrat – Cipollone in the first minutes of his defense mentions the Democrats are asking the Senate to rip up the ballots for the next election which will occur in approximately 9 months – one day after the March For Life March.
The Democrats are asking the Senate to Abort the 2020 Presidential Election – and not a Partial Birth Abortion – a full and complete killing of our Constitutional election process.

Regarding (Wiki + other sources)

Cipollone’s father was an Italian immigrant and factory worker; his mother was a homemaker. He spent most of his childhood in the Bronx.[1]

The family moved to Kentucky, where he graduated from Covington Catholic High School in 1984 (apparently never attacked by Black Jews and drunken Indians).

He graduated as class valedictorian from Fordham University in 1988, with a Bachelor of Arts in economics and political philosophy.[1]

a partner at the law firm Kirkland & Ellis, and prior to taking over as White House Counsel was a partner at Stein, Mitchell, Cipollone, Beato & Missner, where he practiced commercial litigation.

He has ten children. With 10 kids he’s dealt with the behaviors of Pelosi, Schiff, Nadler and Schumer –

I have never seen a Prosecution so hopelessly gutted.
And the poor bastards have to show up Monday for more medicine.
This is almost sadistic.

The defense is clearly 20 levels above the Prosecution.

But, the Defense has to be merciful, and finish them off professionally.

All details must be addressed.

It’s like an All-Pro football team against a pack of 3rd graders.
Hopeless. Miserable. Imagine the humiliation.