Trump promised new sanctions that will remain in place until Iran changes its behavior. 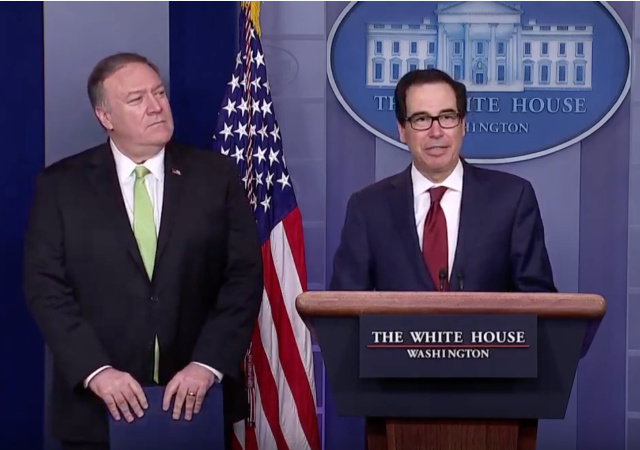 Mnuchin stated that the administration chose the eight “senior Iranian officials for their involvement and complicity in Tuesday’s ballistic missile strikes.”

The eight Iranian officials include ” Ali Shamkhani, the Secretary of Iran’s Supreme National Security Council; Mohammad Reza Ashtiani, the Deputy Chief of Staff of Iranian armed forces; and Gholamreza Soleimani, the head of the Basij militia of the Islamic Revolutionary Guards Corps (IRGC).”

“There is no doubt in my judgment as I observed the Iranian activity in the region that night, they had the full intention of killing US forces, whether that was our military folks or diplomatic folks in the region,” Pompeo said.

He added: “I’m confident that the response the President has taken is appropriate. The President has said we don’t want war. We want Iran to behave like a normal nation.”

Pompeo also told the reporters that the government had “specific information on an imminent threat” of an attack on Americans:

“We had specific information on an imminent threat. And those threats included attacks on US embassies. Period, full stop,” Pompeo told reporters.

Asked how precise the administration’s intelligence of an imminent threats was, here’s how Pompeo responded:

Oh no! Did they clear this through Deep State, Pelosi and Schumer first?

Told to me from an unnamed source:

John Kerry: “Ah, woe is me! where shall I fly, where find Succor from gods or men?”

notamemberofanyorganizedpolicital in reply to Pasadena Phil. | January 10, 2020 at 1:26 pm

That source has lots of names!

None of which we can repeat here!

But Sunny Beach Kerry will just have to……..

“John Kerry: “Ah, woe is me! where shall I fly, where find Succor from gods or men?”

— from kickbacks from US foreign aid for Ukraine and payoffs from the iranian mullahs. In other words, kerry finds his succor from treason.

Just so there is no misunderstanding regarding the scale of the threat, that US embassy is massive. About one square mile and houses about 13,000 employees. The potential loss of life is enormous. This isn’t the Libyan embassy.

notamemberofanyorganizedpolicital in reply to Pasadena Phil. | January 10, 2020 at 1:29 pm

So it would be like preventing about a dozen Murrah Buildings in Oklhaoma City from being blown up – which Clinton didn’t prevent.

Dear Mary, I think you missed the most significant part of the additional sanctions.

By EO, the president placed additional sanctions, both primary and secondary, against any individual involved with, trading with, or assisting certain sectors of the Iranian economy.

That includes the feckless EU.