“At this particular juncture in America’s history, the Senate is being called to sit as the high court of impeachment all too frequently.” 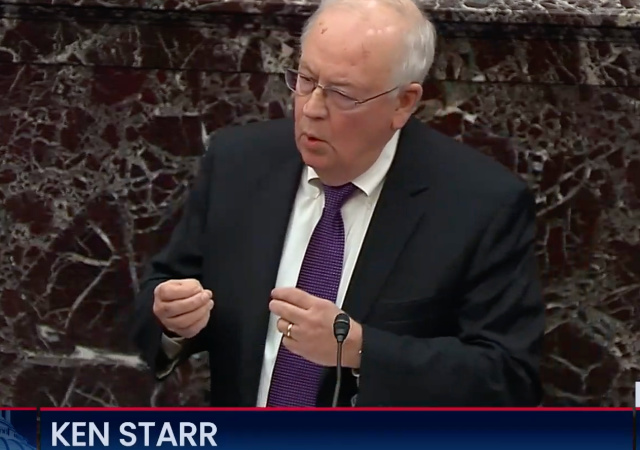 President Donald Trump attorney Ken Starr, of all people, lashed out at impeachment in his first speech today.

Starr, who became a household name thanks to impeachment, brought up how other governments have basically rid themselves of impeachment and hinted we should do the same:

“At this particular juncture in America’s history, the Senate is being called to sit as the high court of impeachment all too frequently. Indeed, we are living in what I think can aptly be described as the Age of Impeachment,” Starr said. “In the House, resolution after resolution, month after month has called for the president’s impeachment. How did we get here?”

“When we look back down the corridors of time we see that for almost our first century as a constitutional republic, the sword of presidential impeachment remained sheathed,” he explained. “Had there been controversial presidents? Oh yes, indeed. Think of John Adams and the Alien and Sedition Acts. Think of Andrew Jackson and Henry Clay. Were partisan passions occasionally inflamed during that first century? Of course.”

“It took the national convulsion of the Civil War, the assassination of Mr. Lincoln, and the counter-reconstruction measures aggressively pursued by Mr. Lincoln’s successor Andrew Johnson to bring about the nation’s very first presidential impeachment,” Starr said.

Starr blamed the Ethics and Government Act of 1978, passed in the wake of Watergate to establish the office of independent counsel, to getting the nation accustomed to impeachment, and cited Justice Scalia’s dissent to a Supreme Court ruling which upheld the 1978 reform.

“The context of this statute is acrid with the smell of threatened impeachment,” Scalia wrote.

“And it’s not hard to discover why,” Starr explained. “The statute by its terms expressly directed the independent counsel to become, in effect, an agent of the House of Representatives. And to what end? To report to the House of Representatives when a very low threshold of information was received that an impeachable offense, left undefined, may have been committed.”

“To paraphrase President Clinton’s very able counsel at the time [of his impeachment], Bernie Nussbaum, this statute is a dagger aimed at the heart of the presidency.”

Starr explained that what followed was “a wildly controversial 21-year bold experiment with the independent counsel statute” that, including Iran-Contra and Whitewater, convinced both sides to allow the law to expire in 1999.

But the damage had been done, Starr said, “America’s Constitutional DNA and its political culture had changed. Even with the dawn of the new century, the 21st century, impeachment remained on the lips of countless Americans and echoed frequently in the People’s’ House. The impeachment habit proved to be hard to kick.”

Presidents Bush and Obama endured frequent partisan calls for impeachment and by the time of the Trump administration, “in the House, resolution after resolution, month after month has called for the president’s impeachment.”

I don’t quite know why the slur on Starr. He was appointed to do a job and did it to the best of his abilities. His personal feelings did not apparently play in to it.

Even if they did, as he said his experience was part of what convinced both parties in 1999 not to renew the Independent Counsel law.

Of course. The point was that there’s no indication that his efforts w/r Clinton were motivated by personal animus or bias.

Milhouse, Starr… Starr is an honest ingin… Too honest and too honorable. White Water and statute of limitations went right over Starr’s head. FOB’s and the Clinton team shut down Starr at every point. Completely outclassed IMO. Milhouse, it pains me to listen to Starr mealy mouth apologize for what I view as his failure as a prosecutor. You Milhouse most probably know why I am wrong and that we have law and process and results do not always appear fair and just.

The ingredient list on a box of oatmeal was more interesting that this rambling idiot. He did NOTHING for the case because I’m sure everyone tuned out after 1 minute like me.

The sorry part of the Clinton Impeachment was Ken Starr was made teh villain.

The sorry part is that Starr never got the evidence he was after, to prove the underlying corruption that the inquiry was originally about. The whole Lewinsky episode turned out to be a red herring that ended up swallowing the whole affair. (Yes, I went there.) As a result, at the end of it all Clinton’s defenders were able to say the inquiry was fundamentally illegitimate.

If Starr had known that Lewinsky’s perjury was suborned directly by the President he probably would have chosen not to pursue it in the first place. The only reason he got involved was because he assumed she’d been suborned by either Jordan or Curry; he hoped he could get her to flip on them, and then use that to pressure them to flip on Clinton for his real crimes. But of course the trail led not to them but directly to Clinton, and he was hardly going to flip on himself.

Milhouse, the big poke in the eye was the purported miraculous discovery of documents on a coffee table outside of Hillary Clinton’s office after the Grand Jury disbanded. Nobody has bigger balls than Hillary. Nobody.

The republicans are blowing a once-in-a-lifetime opportunity to attack the Dems and put them on the defensive. Instead, we get this blow-hard Ken Starr. Totally awful. We get history lessons when the seditious Dems are destroying our constitution and our country.

Trump needs to fire this entire ‘defense’ team immediately and bring in folks willing to ‘go for the throat’ against the traitorous dems. Demand that Schiff and Biden go under oath and testify. This is for all the marbles as the saying goes.

Once again, he’s only doing what the defense team assigned him to do. There are others to bring the fire and brimstone, if they so decide.

There are apparently none

Well, Trump and his lawyer picked the team, so apparently they’re doing what he wants.

He dropped a hint, that there was an exit ramp for the Senate. I was wishing he had been more explicit.

He kinda left that hanging.

IMO, Starr did a nice job in recasting the role of Senators from members of a legislative assembly to that of members of a judicial tribunal. He also buttressed that by reminding everyone that the HoR doesn’t take an equivalent oath during the impeachment inquiry. Finally he was able to communicate the often overlooked point that it takes a majority vote of the HoR to authorize an ‘impeachment’ subpoena. I am certain that the vast majority of folks were not introduced to that point until today.

His role was to provide background, history and in general educate folks at home about how impeachment is supposed to work. Nice and clear explanation to anyone who wanted to listen.

Need to check out Pam Bondi. Best on youtube. Her argument in front of the Senate just destroyed the Bidens. Hopefully this will start the roll up of the corrupt Dems.

If Roberts doesn’t tell the Senate to give a directed verdict of Guilty, will the House move to impeach him (and Kavanaugh, and Gorsuch too)?

Listening to Dershowitz now – mentioned Maxine Waters by name – said she is dead wrong [essentially, dumb as a box of rocks]!

Trump deserves a better defense than these has-beens. Their best day was Saturday when no one was watching.