One Democrat voted against the resolution. No Republicans defected. 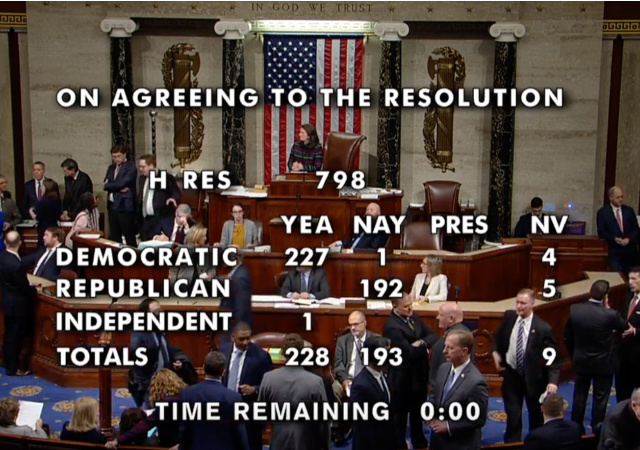 The House of Representatives voted to send the articles of impeachment against President Donald Trump to the Senate.

The vote included approving Speaker of the House Nancy Pelosi’s choices to serve as trial managers.

Guess what! It was a bipartisan vote, but not in Pelosi’s favor:

The measure, which passed 228-193 largely along party lines, came nearly a month after lawmakers voted to impeach the president.

Rep. Collin Peterson, D-Minn., was the only Democrat who voted against the resolution. Rep. Justin Amash, I-Mich., voted with Democrats. There were no Republican defections.

Pelosi chose these seven representatives to serve as managers:

The managers will act like prosecutors. They present “the case for impeachment to the Senate.”

The Democrats would have to get two-thirds majority vote (67 votes) to remove Trump from office.

Some people pressured Pelosi to pick Rep. Justin Amash (I-MI), who recently left the Republican Party. Pelosi clarified that the Democrats never even considered Amash to serve as manager.

Rep. Dean Phillips (D-MN) wanted Amash on the team, calling him “very worthy” of the position. He also said it would show impeachment as “a bipartisan prosecution.”

Other House Democrats celebrated the managers selected by Pelosi.

“The fact that Nancy Pelosi sat on the articles of impeachment for as long as she did just proves that there was never any urgency and that it was just a failed attempt to politically damage President Trump leading up to his re-election. This was a sham impeachment from the beginning and never anything more than Democrats trying to interfere in an election that is now less than ten months away.”

November will be interesting.

It doesn’t surprise me that they’d be so laughably partisan as to put Schiff and Nadler as managers.

It DOES surprise me that they’re so STUPID that they’d put Nadler and Schiff as managers.

I mean seriously, they have zero credibility left even with Democrats.

shifty Schiff will be a manager for the prosecution and a witness for the defense.

Did anyone read HR 775? This is dog and pony show.

Wake me up if the DEM House works for the 1st time in over of year….

The group photo of Pelosi and the managers looks like a final portrait of condemned prisoners.

And a part of a Trump ad.

They all have safe seats. They will be there as long as they want.

Managers include a nephew of Epstein, Schiff, who lied during his own hearings, and a bunch of piss dossier truthers.

notamemberofanyorganizedpolicital in reply to Petrushka. | January 15, 2020 at 4:05 pm

Articles of impeachment were introduced against 5 of the 6 Republican presidents who have served since President Dwight D. Eisenhower.

Milhouse in reply to notamemberofanyorganizedpolicital. | January 15, 2020 at 10:44 pm

“Articles of Impeachment were introduced” is true. “The Democrats tried to impeach” is false. And of course none of them were impeached.

You know if the Russians interfered in the 2016 election it sure backfired on them and did us folks in flyover country a huge favor, Go Vladimir. 29,000 Dow???? WOW!