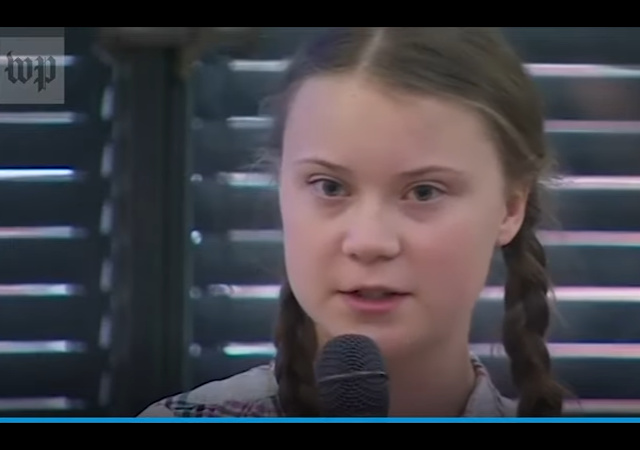 Due to a glitch in a recent Facebook update, teen green activist Greta Thunberg is now addressing supporters have who have raised questions over who writes her climate change posts.

The Swedish teenager has amassed a loyal band of supporters on social media where she shares regular updates on her efforts to raise awareness of the threats facing the environment. But a Facebook bug which was live for several hours from Thursday evening to Friday morning enabled users to see which admins were responsible for editing pages. This meant that any user could view anonymous accounts which edit pages, including those belonging to celebrities.

One quick-minded fan of Greta, 17, tapped into one of her posts thanks to the glitch and managed to take screenshots of the accounts which had edited it.

And to her followers’ dismay, it showed the the accounts behind some of the posts were those belonging to her father Svante Thunberg and Indian climate change activist Adarsh Prathap.

A recent Facebook glitch revealed the accounts posting for Greta Thunberg: her dad and Adarsh Prathap. Greta addressed the criticism on FB: ‘All texts posted on my Facebook page has of course been written by me, just like everything else.’ pic.twitter.com/abAkdW9RqA

And while it is hard to know who is typing the Tweets, it is interesting that Thunberg has now decided to target tennis legend Roger Federer over his association with financial institution Credit Suisse.

The 20-time Grand Slam winner came under fire from the climate activist when she criticized the Swiss bank for its record of loans to fossil fuel industries.

The 38-year-old Federer, who is currently in bushfire-ravaged Australia preparing for the first major of the year, said Sunday he is “happy to be reminded” of his responsibilities, but stopped short of abandoning his sponsorship deal with the bank.

Federer was urged to “wake up” in a retweet by Thunberg last week, which also prompted the hashtag #RogerWakeUpNow to trend on Twitter.

Federer responded with a great deal of restraint and circumspection.

Roger Federer‘s statement regarding the protests from climate activists, asking him to break ties with Credit Suisse. #Federer pic.twitter.com/vg9Ig1EmQ7

However, he refused to address his relationship with the bank directly.

One wonders how much Thunberg cares, or if this was a tennis ball lobbed for a media distraction from troubling questions about the realities of using a struggling teen as a climate change shield.

This angry little know nothing is about as real as AOC.
She is the face for adult activists who know people calling out a kid for being an ignorant tool will be attacked for doing that.
This girl has problems, her father and other adults are using her.
It is as simple as that.

St. Greta is an ignorant tool … and I am an adult. If anyone wants to start attacking me, feel free:).

I think the proper title is St Greta of the Scowl

notamemberofanyorganizedpolicital in reply to GWB. | January 14, 2020 at 9:18 am

Since those activists are Chronic Liars,
read “Edit” as “creates completely” for her……….

I’m still partial to “Doomsday Addams.” Wish I could remember who first posted it.

Gretas handler and escort works for a George Sorass owned company. Just another paid protester. Now you know how a kid can afford to buzz around the world.
#2 In the 70’s & 80’s all the top scientist said I would be dead and under ice by year 2000. Are you laughing? I am
#3 What happened to the dreaded shrinking ozone layer that was going to kill us all? Did science forget about it? lol
#4 Global warming? Oh No it is now climate change. Lol
#5 Listen to a 14 year old NOT NASA data that says the opposite. How many teens do you know that are not smart enough to keep their pants pulled up. Lol
#6 Are investors buying up the “high ground”?? ROFLOL
#7 Banks are still giving 30yr. loans on ocean front property. Banks want to lose hundreds of billions ?? Or They don’t believe the climate crap either.
#8 I am still here and I am still laughing. I am not in panic mode because brainless AOC says I am dead in 12 years

When caught in lie, make up a second lie to cover the first. People have to believe both lies, or else. How dare you!

So it’s confirmed…. Her parents are using their autistic child to push their political agenda. Wow, just, wow…….

notamemberofanyorganizedpolicital in reply to Moon Battery. | January 14, 2020 at 9:19 am

I’m sure most people had a feeling that this girl couldn’t do this on her own and that she was being used. I know I did, and now it’s been proven. Disgusting.

It’s time to start completely ignoring this dunce of a kid, just like I do most kids.

Greta is like the JonBenét Ramsey of the environmental movement.

Ha, I bet they are a bunch of sick pedo.

Hey, kudos to the teen who exposed the hoax! At least someone is doing the job that the media won’t do!

Must see: https://www.youtube.com/watch?v=uo8qXxnFuRQ
Video made at a London comedy club featuring “conservative,” non-PC humor on the YouTube channel “Comedy Unleashed.” This one is “Climate change trans counseling (inspired by Greta Thunberg).
Hilarious.

This guy is pretty good too.

If you get on the Comedy Unleashed site, give yourself a morning to watch and an afternoon to recover. Common sense is funny, it seems.

Sooner, if she crosses Shrillery.

Children are, at best, incompetent to make their own binding decisions at age 15 and, at worst, total idiots. That is why they have parents or guardians who are responsible for them until they are 18 years of age. They simply have no qualifying life experience to give their ideas any credibility.

Thunburg is a classic example of child exploitation. Her entire appeal is emotional. without any verified facts to support her pronouncements on climate change and its future course. Now, I would suggest people follow the money, where Thunburg and her family are concerned. How much are they receiving and where is it coming from. It might just be illuminating.

If the world followed the directives of this mentally ill child, Billions would suffer and die slow deaths.

Somebody needs to wash her mouth out with soap, take her Internet away and send her to her room without dinner.

I’m more concerned about her general lack of fashion sense.

Just think what a child between her and Davie Hogg would look like!