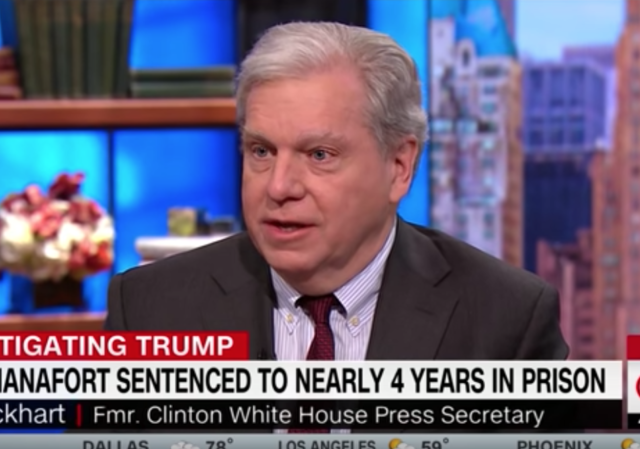 Wednesday afternoon, CNN Political Analyst and former Clinton White House Press Secretary, Joe Lockhart, tweeted a made up story about Republican Senators “who only watch Fox News” saying that if what Schiff is saying is true, they’re up a creek. 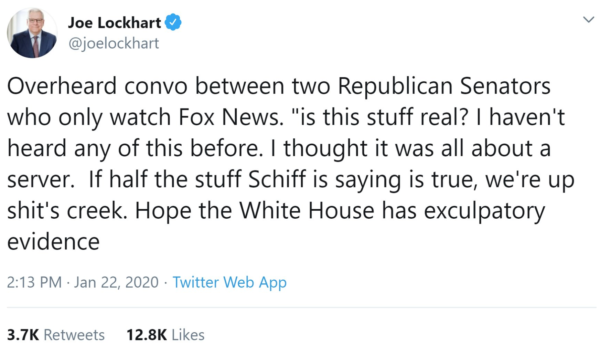 Except no one said that… 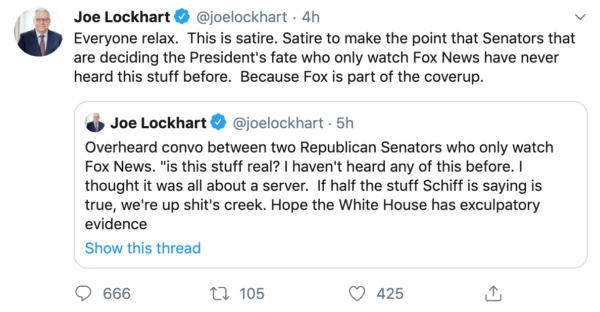 Naturally, it’s all the right wingers who don’t get it. ?

Totally unbiased commentary and analysis. He may as well make out with Schiff.

Lockhart manned the White House Comms when Slick Willy was impeached, so it’s not a stretch to understand his emotional involvement this time around. That said, it’s wholly unprofessional. If that even matters anymore.

This is absolutely no excuse for this. No excuse for tweeting it, no excuse for leaving it up. How are we journalists supposed to effectively counter Trump admin misinformation if this is what anti-Trump CNN pundits are doing? The addiction to retweets breaks some folks' brains. pic.twitter.com/4zksQFq6Lo

Is this stuff from Joe Lockhart real? No- it’s not reporting… it’s totally a joke.

This is CNN, the Counterfeit News Network.

notamemberofanyorganizedpolicital in reply to JackinSilverSpring. | January 22, 2020 at 7:59 pm

Let’s make that Fake political analyst and CNN admit this.

Is this where Schiff-for-Brains learned to just make up crap and present it as factual? What a piece of work.

As noted above, Lockart also tweeted that Trump “promised to cut your social security benefits in his second term.”

From The Fiscal Times – http://www.thefiscaltimes.com/2020/01/22/Trump-Says-He-s-Open-Entitlement-Cuts …

“In an interview at the World Economic Forum in Davos, Switzerland, CNBC’s Joe Kernen asked Trump if entitlements would “ever be on your plate?”

“At some point they will be,” Trump said. “And at the right time, we will take a look at that.””

I didn’t watch the 20 minute CNBC video that is embedded in the article, and I didn’t see any link to a transcript to verify the quote.

But, a comment that “we’ll take a look at it” is not the same as “promised to cut your social security benefits.”

So, while trying to say his previous tweets were a joke, he manages to lie yet again.

you need to remember what they consider a “cut”, if they think ss benefits should be increased by 5 percent and it only goes up 3 per cent that would be a cut.

Best reply to Lockhart was a tweet from the Babylon Bee: “You leave the satire to us, we’ll leave the Fake News to you.”

Well, we aren’t calling them fake news without reason. And they provide more than enough reasons all by themselves.

Lockhart worked for a liar (convicted liar that is. Clinton) so I’m sure he sees no reason not to lie. It his personal truth after all. These people are jokes. Dangerous to the Republic, but still jokes.

Unfortunately, Clinton was not convicted. He was only impeached, but it was lot less partisan and flimsy than this impeachment.

Regardless, Clinton is a hack that gets credit for his “reported high IQ” and all of his economic fixes that were orchestrated by Gingrich and company. He just had no choice but to take credit since he was unable to veto most of it.

He also managed to bungle the good stuff by setting up the mortgage crisis with a Dem push for approving very suspect loans under the guise of affirmative action and “fairness”. Sound familiar? It should…it’s today’s progressive rally cry by people who learned nothing from the damage of yesterday’s crisis. Instead, they doubled down on these logic-free, ignorant battle cries to drive us further into the mud.

Clinton was impeached on 11 felonies.

Maybe joe is auditioning for a job with Schiff to write the screenplay for the impeachment. Complete with embellished Ukraine phone call and special guest appearance by cocaine Mitch.

Reminder, Joe Lockhart was also a key player in Rathergate. He was the connection between the Kerry campaign and Mary Mapes.

They’re not even clever anymore. They really though the game was still on.

PDJT is becoming on par with George Washington. No hyperbole, either.

Washington had the well-earned privilege of serving around moral men with standards and common goals of nation building for a better future. Trump sits over a swamp of creatures that should be made extinct or, at least, waste their own resources instead of dragging down what’s left of our great nation.

Why is anyone surprised? Schiff did it in the impeachment hearings. Joe figured if nothing happened to the guy who was impeaching the POTUS then old lowly Joe could lie on twitter and nothing would happen to him. He was right! The Dems have created a firewall of disbelief and in the future, only the msm will believe them and vice versa.

This guy thinks, even in “satire,” that anyone would remotely believe anything that comes out if schiff’s mouth? Projection is one of the old worn out plays from the democrat playbook that just doesn’t fly anymore.

He should be fired, as being unfit for his job as a reporter. CNN is unfit to be part of our national conversation, otherwise, they’d fire him.

This is pretty bad—a solid blend of ineffectual and evil—but I don’t think it’s quite down to the level of Maureen Dowd. Remember in the early Obama days when she wrote that she could just hear a “boy” tacked onto anything those people might say about Bammy. Of course that didn’t tell us anything about those she was dumping on so much as it told us about Dowd herself. Man, it must really suck to wake up in the morning and be her. Not just a weirdo, but a malevolent weirdo. This guy has the lite version of the same brain defect.

Of course there’s also the whole cheap tactic of saying, “sure I called him a closet child molester, and then he flies off the handle . . . I must have hit close to home!” Just as they tried to do to Kavanaugh when he showed some irritation at his smear job, and was then criticized for lacking a “judicial temperament.”

This. Very much this. And Maureen Dowd is a real piece of work.

“He may as well make out with Schiff.”

He did make out with the geek.

Why wouldn’t he make up the quotes? Everything about this “impeachment” is made up. The charges, the evidence, the ‘solemness’, the fact witnesses that weren’t…all of it.