CNN fighting with Babylon Bee over who has the fakest news

CNN fighting with Babylon Bee over who has the fakest news

The Babylon Bee is an openly satire site. CNN is not, but it’s sometimes hard to tell the difference. 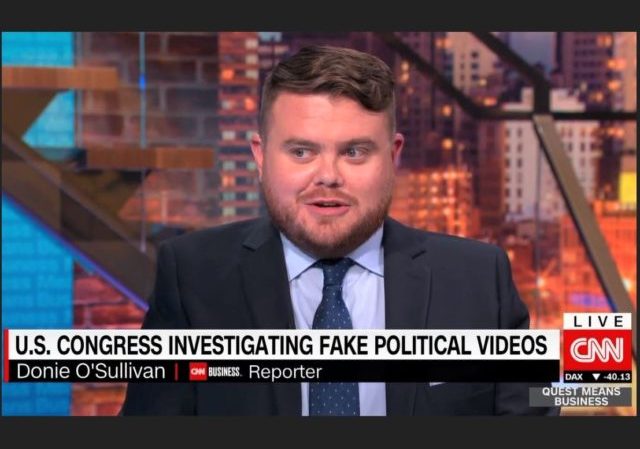 CNN has been racing to the ratings bottom for years now, and their latest ridiculous attacks on the satiric website the Babylon Bee are sure to help them along the way.

The wildly popular Christian satire site has come under fire from CNN before, but this time, it’s CNN that reads like satire.

It all started with an article the Bee, a self-described “Trusted Source For Christian News Satire” site, published that poked fun at the Democrats’ reaction to President Trump ordering the strike on Iranian terror master Qassem Soleimani.

The satiric piece entitled Democrats Call For Flags To Be Flown At Half-Mast To Grieve Death Of Soleimani is hilarious, and like all good satire, it works because it’s an exaggeration of something that is actually happening.

CNN’s Donie O’Sullivan read a tweet about how popular the piece is and immediately took issue with the Bee.  It seems, much to his and CNN’s chagrin that the Bee‘s article received more social media engagement than top stories at the New York Times and CNN had over the course of a full week.

To put this in perspective, this is the same number of engagements the top NY Times and CNN stories on Facebook had over the past week.

A lot of people sharing this "satirical" story on Facebook don't know it is satire. https://t.co/HnDjuqw2si

Normal people do not find this surprising . . . except perhaps the fact that the NYTimes and CNN have their stories shared half a million times over the course of a week.

Having a disclaimer buried somewhere on your site that says it’s “satire” seems like a good way to get around a lot of the changes Facebook has made to reduce the spread of clickbait and misinformation.

I have no idea what that is supposed to mean.  O’Sullivan seems to be engaging in some sort of wild conspiracy theory.  The Bee is “burying” the fact it’s a satire site to circumvent Facebook rules in order to do what exactly? And for whom?  Tinfoil hat territory here.

The data I pulled on Facebook engagements is from @BuzzSumo btw

The problem, of course, is that the Bee is immensely popular on the right, so it must be crushed.

Interestingly, O’Sullivan doesn’t seem to have the same problem with the Onion.

After all, as Babylon Bee founder Adam Ford pointed out, people often are mislead by Onion articles, too, and think them real until they learn they are satire.

“A CNN reporter is taking shots at the Bee because our articles get shared a lot and some people think they’re real (which will always happen with satire). After thinking ‘how adorable,’ I thought, ‘well surely this guy has chirped at the Onion for the same thing…” Babylon Bee founder Adam Ford responded. “There are websites dedicated to chronicling reactions from people who think Onion stories are real. Foreign leaders have famously been fooled by Onion articles. And this guy’s bio says he ‘covers disinformation’ for CNN. Surely he has taken the Onion to task as well, yes?”

He continued, “As it turns out, Mr. O’Sullivan HAS tweeted about the Onion. But it looks like he’s quite the fan!”

As it turns out, Mr. O'Sullivan HAS tweeted about the Onion. But it looks like he's quite the fan! https://t.co/MMLRP8J8n0 pic.twitter.com/8iFA3CQlHi

The response to O’Sullivan’s Twitter meltdown has been hilarious.

You guys should definitely keep focusing your energy on Babylon Bee and people sharing a joke article is in no way a reflection of the garbage state of your profession. https://t.co/FuzhjfcpPg

This is a point that the Bee picked up,too, with its recent post entitled “CNN Attacks Babylon Bee: ‘The Internet Is Only Big Enough For One Fake News Site’.”

My mom follows Adam Baldwin – I like him, too – he retweeted that article from the Bee.

She read me the article and asked if it was true, she said it has to be fake. I told her the Bee is a satire site and a very, very good one, too.

We had a great chuckle.

Sean Davis’ tweet is the best of the lot. It was LOL worthy.

Exhibit One: Only very, very stupid people do not understand the satire of The Babylon Bee.

You’d be surprised at how many retards exist out there that reply to Sean Spicier’s twitter feed.

A lot of people sharing this “satirical” story on Facebook don’t know it is satire. https://t.co/HnDjuqw2si

— Donie O’Sullivan (@donie) January 5, 2020
——————————
Somehow I suspect donie isn’t real bright. Not at all. Probably licked the windows on the short bus to his special school for his special classes. Only an idiot – or a cnn hack – would think Babylon Bee isn’t a satire site.

One of the fundamental sayings for Christian Satire comes into play here: The Devil will not be mocked!

Donie O’Sullivan is a white male. His opinion means nothing.

Humor is a powerful weapon. The left (CNN being their flagship) is shooting blanks.

We’re overlooking the fact, perhaps because we’re not surprised, that we’re assumed to be too unintelligent to know it’s satire before sharing.

“A lot of people sharing this “satirical” story on Facebook don’t know it is satire.”

How in the hell do you know this, Donie? Did you conduct a poll?

This is stupid on many levels.
As everyone knows, CNN is no longer even a shell of what it was during the height of the Gulf war when Wolf Blitzer and others covered the attacks.

Speaking of satire… CNN has a little leprechaun-looking douche-bag named “Donie O’Sullivan” on as a reporter. THAT is satire. Right?

I hadda larf at this juan:

I see that Mr. O’Sullivan needs this:

CNN’s reaction to this is the very definition of “butt hurt”.

Sorry, CNN’s dead right this time. This crap’s not really all that funny. Once it’s retweeted and the “Babylon Bee” name is stripped out, it becomes the rankest of propaganda. It’s then no funnier than Schiff reading a fake transcript of the Trump/Zelensky phone call into the Congressional Record, then claiming it was satire. Michael Moore used to pull the same trick—trumpet a bald-faced lie, then when called out say “hey, chill out, man, it’s humor!” thus trying to blame the victim for his own rancid behavior. “You’re too dumb to realize that my slanderous attack is hiding under the guise of humor, hyuck, hyuck!”

Recall that a man recently was released after seven years in prison for a rape he didn’t commit. The woman who accused him was trying to solicit sympathy from another woman, so made up a rape story. She later said that it never occurred to her that the guy would actually be convicted, since there were no witnesses and not a shred of evidence. Fake stories really aren’t all that funny. But anyone who points that out must be “too dumb to know that it’s humor”—maybe dumb enough to send a man to jail. Hyuck, hyuck, a real knee-slapper, that, right?

Apparently, you forgot to add a trigger warning to your article.

Yes, i agree that fake news can be a problem.
And the bigger problem is that people don’t even do a basic Google search to vet the info before forwarding.

But you compare apples to oranges. When Schiff reads a parody, he speaks as a Congressman, and he knows he is stating a parody (=lying).
When the average Joe or Suzy Crumbcakes resends fake news, if they remove the source (in this case, Babylon Bee), that is bad. But I don’t believe it is as bad as a government leader doing this. Or CNN when they edit a photo or a video to give a bad impression of Trump. Think throwing away fish food in Japan.

People do not think and drift towards fideism. just believing because they want to. That is bad.

But let’s not equate Suzy C. doing it with Schiff or CNN doing it. And in the case of the Babylon Bee, they NEVER claim it is a true event.

second from last sentence should be:

“People do not think, and [so] drift towards fideism. just believing because they want to. That is bad.

I had to do a double take at your last line before you posted the erratum.

I was like…that’s kind of opposite of the truth 🙂

Brian Stelter, is that you?

I wonder if the end result will be CNN needing to list itself as a parody site.

“A lot of people sharing this “satirical” story on Facebook don’t know it is satire.”

Where is the statistical evidence to back up this claim? Was there a poll? Focus group?

Where do they find these people willing to sell their country out so cheaply?

I hate to break this to you Donnie, but more people watch test patterns at 2 AM in Rapid City, SD than watch CNN. How can anyone take a network featuring on-air “adults” with names like Donnie and Poppy seriously?

So how much did the Babylon Bee pay the Covington kids? Maybe they need a disclaimer hidden on their site too.