“She herself said she would personally shoot U.S. hostages in the head if American troops came to liberate the hostages.” 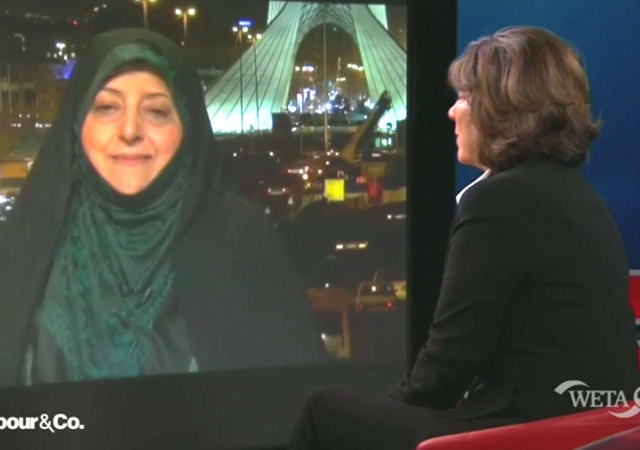 During their coverage of Iran this week, CNN’s Christiane Amanpour interviewed a woman named Masoumeh Ebtekar, who currently serves as Iran’s Vice President for Women and Family Affairs. Amanpour failed to make viewers aware of Ebtekar’s past.

Ebtekar participated in the Iran hostage crisis, and at one point even said she was willing to shoot the hostages.

CNN Gives Friendly Interview to Iranian Woman Who Said She Would Kill U.S. Hostages in 1979

On Tuesday night, CNN aired an interview between its international anchor Christiane Amanpour and Masoumeh Ebtekar, currently Iran’s vice president for women and family affairs. Amanpour did not once mention Ebtekar’s connection to the Iran Hostage Crisis in 1979, however. Ebtekar was one of the pro-Islamic Revolution students who seized the U.S. Embassy. She herself said she would personally shoot U.S. hostages in the head if American troops came to liberate the hostages.

In a brief segment cut from a 15-minute interview, Amanpour asked the Iranian leader whether the strike that killed Quds Force leader Qasem Soleimani had brought Iranians together.

Iranian Vice President Massoumeh Ebtekar: “The American president made a serious miscalculation, they made a serious mistake by assassinating, by taking this terrorist action, against Commander Soleimani, and I’m sure that they regret what they have done.” pic.twitter.com/KTQgPNjGBP

Here is Ebtekar as a participant during the hostage crisis stating plainly that she would be willing to shoot and kill the people being held in the American embassy:

Shame on you Amanpour, She took Americans hostages 40 years ago when she seized USA embassy in Iran. Even today she was asking ppl to chant “Death to America” Shame on You Amanpour , U are a disgrace to Iranian. This is Ebtekar 40 years ago. pic.twitter.com/oHTACLOMHM

Doesn’t that seem like a rather important point for Amanpour to leave out of her report?

It has not gone unnoticed.

Outrageous. @camanpour should explain how this happened. https://t.co/0yvHhOU7Lh

Amanpour’s guest is @ebtekarm, the same woman that climbed up american embassy walls in 79 and took americans hostages and said she is willing to sh**t them. She didn’t mention who this woman is to her audience.
Pl. Watch this 2min clipp@EliLake @BenWeinthal @RichardGrenell pic.twitter.com/0UeDJrSrYH

CNN aired Iranian propaganda accusing America of “terrorist action.” The guest was spokeswoman for the Islamic revolutionaries of ’79. She once threatened to shoot American hostages.

In other words, @CNN let a terrorist on air to accuse us of terrorism.https://t.co/u8PHpRu43Q

During the fall of the Sha — Christiane Amanpour a highly connected member of the Iranian elite was off studying in London. Her uncle the head of the Iranian Air Force evacuated some Americans from the empty Palace to the Airport via helicopter.

The Americans asked him to flee with them. He replied if I leave they will kill my family. A few days later a picture of his body hanging from a crane was on the front page of the New York Times.

Is Christiane Amanpour grateful for the sacrifice?

Stop! You’re killing me. Far too funny! That was a joke, wasn’t it?

I would expect nothing less from the leader of fake news.

notamemberofanyorganizedpolicital in reply to walls. | January 10, 2020 at 2:17 pm

Their “omission” of the one most important fact about that terrorist’s life is so large isn’t it an actual “commission” of some sort of felony by CNN?????????????

This was disgusting and people should be fired for less.

George Washington would have had the leader(s) hung and the followers jailed. He was a forgiving man but also cut treason and chaos fast, before it grew roots. Both qualities put together inspired loyalty and helped him win against the might of the British Empire.

This is not treason, and Washington would have done nothing to prevent it.

If she wants to interview a terrorist, I guess there’s nothing to stop her, but it’s just dishonest to present this woman as some legitimate representative of the government without providing her background.

I’m sure someone who threatened to shoot American hostages in the head is a disinterested and credible source.

Um, the terrorist is a legitimate representative of the Iranian government. There’s no reason not to portray her as such. Amanpour should have mentioned her background just so viewers know what kind of representative the government has.

The terrorist is some legitimate rep of the Iranian govt.

I’m taking this as meaning that the post ‘79 Iranian gov’t is a true, Koranic Islamic regime just as they say they are. That requires terrorism because it is so commanded in the Koran and recorded in the life of Mohammad.
When someone states that they intend to enslave and extinguish you even if it takes a thousand years and results in their own total destruction, you should listen.

The point is very simple. She is a legitimate representative of the government. I don’t understand how her being a terrorist could prevent her being that.

Most certainly she can be a terrorist and a government official in Iran, a country which openly embraces terrorism.

I think that everyone active in the embassy takeover should be targeted for immediate termination, starting with Masoumeh Ebtekar.

We’re already inured to this. When Sharpton mouths off, no one bothers reminding people of his Tawana Brawley hoax. But at least treating Sharpton with respect he does not deserve buys goodwill with a deluded minority community in the US, while Amanpour’s anti-American and anti-Israel biases have no redeeming benefit.value.

CNN’s Christiane Amanpour
There’s your first problem, right there. She, herself, is sympathetic to totalitarian, terroristic gov’ts.

A fish doesn’t know it is wet.

Milhouse, nothing prevents her from being both a terrorist and an Iranian government official. Suleimani was both also.

Nothing illustrates the true nature of the terror regime in Tehran than pointing out you can’t swing a dead cat in a cabinet meeting without hitting an elderly retired or currently active terrorist.

That needs to be pointed out often with the volume turned up to 11.

The vile leftist MSM is conspiring with the Dems AND the Tehran terror regime to bury relevant information to hide the true nature of that regime.

So the Dems can try to convince the public that erratic, psycho #OrangeManBad went off his nut and whacked the second coming of Ghandi. Who only was in Baghdad for a poetry reading.

Like the rest of the MSM, CNN’s dishonesty comes in two ways: 1. the fake news it reports and 2. the real news it covers up.

hillary clinton was writing checks to these bartards (huma abedin’s mother, for one).

Every day that hillary clinton walks free, is another day we have ZERO faith in our justice system.

In 1979, Iran d-double dared the USA to give them a second visitation of Hulegu Khan or Temur-e-Lang, replete with raising towers of skulls in the ruins of cities that resisted. Now Iran whines when Pres. Trump pointedly shows them he is not Jimmy Carter and will not tolerate even the hint of another embassy takeover.

One gratifying experience: Back in the Bush II days, I was on the Washington Mall and accosted by a mojahed-e-qalq who wanted my signature on a petition against the mullah-ocracy. I “innocently” asked him if his group wasn’t the first band of “revolutionary fighters” into the “nest of spies” in 1979, He affirmed this. I then launched into him, telling he has his f-ing nerve to stroll the Washington Mall soliciting American support, when his Marxist-Muslim crew basially said in 1979 that there could be no other relationship with America than hostility. I told him that were I president, I’d have his whole lot rounded up, stripped of immigration benefits and even citizenship if foreign-born, and deported toute de suite. He retreated, the front of his pants darkening.

If obama had had any balls he would have told the world court that said we owed Iran all of the money from the cancelled weapons buy from the Shah that they owed us for the 444 days 0f kidnapping and holding our embassy personnel and all of the other deaths and destruction they caused us and our allies. In the end, we would not have given them one penny if had had any balls. He didn’t!

When the embassy was attacked and taken over, the US should have declared war with Iran. The takeover by Iran was an act of war encouraged by their government.

A declaration of war is not necessary for a state of war to exist.

CNN has become a laughingstock under Jeff Zucker. Nobody and I mean NOBODY takes them seriously anymore.