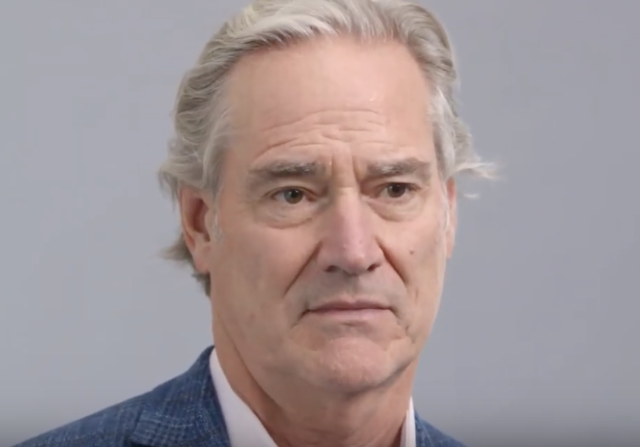 Sunday, the Michael McCain, CEO of Maple Leaf Foods, used the official, verified, company Twitter account to criticize Trump’s decision to take out Soleimani, who he appears to blame for Iran’s decision to shoot down a commercial jetliner.

McCain claims a work colleague lost his wife and son in the Flight 752 attack. 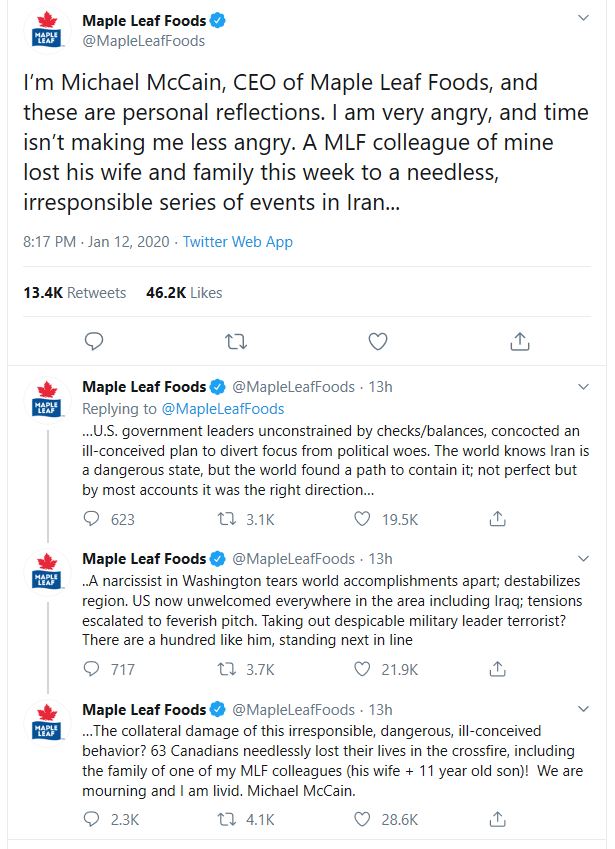 According to the Vancouver Sun, the company was aware of the remarks and posted them on McCain’s behalf:

Maple Leaf spokesperson Janet Riley said McCain “gave great thought” to his remarks. “He asked us to post it and we did,” she said. Though Maple Leaf hasn’t released details on the staff who lost his family in the crash, Riley confirmed that McCain knew him personally.

Without ever naming Donald Trump — referring to him instead “a narcissist in Washington” — McCain criticized the president’s abandonment of the Iran nuclear agreement and the recent U.S. killing of Iranian general Qasem Soleimani.

I’m so over conscious branding.

He should just consider things as ‘pay back’ for all the people who got sick and died from eating his rotten chicken over the years.

notamemberofanyorganizedpolicital in reply to C. Lashown. | January 13, 2020 at 5:28 pm

May the “Bird of Maple Leaf” fly up your nose Mr. Canuck CEO.

Maybe this will splash chicken gravy all over that CEO too!

“Trump, James O’Keefe Hint Something Big About To Drop On Bernie Sanders”

“HAND slaughtered Halal products that will appeal to a multitude of diverse guests.

Mina strictly adheres to the Islamic faith and is certified by the Halal Monitoring Authority (HMA hmacanada.org),”

These progs keep spewing this nonsense about Trump taking out Soleimani to “distract from his political woes.”

Are they really that stupid? The impeachment fiasco wasn’t hurting Trump in the polls, it was helping him. The Dims were the ones getting crucified by the idiotic process.

How a guy this stupid ever became CEO of a large company is baffling.

Inherited the company from his father.

Company CEOs and others need to keep their big yaps shut. Canadians may cheer his temper tantrums but, I think Maple Leaf has some presence here. Why risk killing sales?

Yes, killing sales would probably be worse for them than killing consumers.

What an idiot. I’m angry too, I’m angry about all the deaths caused by Soleimani including the 1500 people he killed just last month. Apparently, they don’t matter to Mr. McCain. As far as checks and balances go Congress gives the President the authority. I suppose he couldn’t muster an ire over the hundreds of people killed by Obama’s missile attacks either.

It’s easy for Canadians to talk cheap, the US protects them and supplies the greater part of their economy without much responsibility on their part.

I’m sorry about his friend but Trump bears no more responsibilty than he does.

notamemberofanyorganizedpolicital in reply to floridaman. | January 13, 2020 at 4:09 pm

Hypocritical Canadians (notice I didn’t say all – just the virtue signaling ones) are the Hyacinth Buckets of the world.

Would you ever send your wife and son to Iran, of all places? What is wrong with these people.

Because he’s an idiot.

Apparently Maple Leaf Foods only distributes in Canada so I can’t add them to the growing list of brands I won’t use/buy (all P&G products, anything by Kellogg’s/Campbell’s, Nike, Comcast, AT&T, etc.).

That’s all right, I’ll not buy from them on your behalf.

I grew up in Kitchener, Ontario, I buy my meat from Schneiders.

Sorry, according to their website they do business in the United States. So you might want to watch out for their brands.

Maple Leaf Foods employs approximately 12,500 people and does business in Canada, the U.S. and Asia.

I get angry at the twisting by the Progressives of reality. He describes the Iranians shooting an airliner as “cross-fire”.

What a gutless wonder this man is that he can’t assign blame to the person who misidentified an airliner coming OUT OF its friggin main airport in Tehran and ordered a missle strike.

If he thinks he is angry the rest of us are angry at the incredible mess his kiind of thinking have createdfor the rest of us including an out-of-control Iran.

The truth is worse. There was no ‘misidentification’ going on here, only a cold calculation by the ‘supreme leader’.

Tell you blackface SOY BOY Pm to lead from the front not the rear.

His rear dominates his id, he is helpless.

Is there a McCain with a Brain?

… who is not insane? And not a bane, to our existence, whether from Maine,or other places in our nation with waves of grain? Please: someone explain!

Bravo! Bravo! Well done, sir! I had to log in just to “thumbs up” and applaud this fine effort.

I have my moments. But, only on days that end with “y”.

Doesn’t appear so and this one is a frickin Canadian. Suck it sweety.

Not a word of condemnation for the actual murderers. What a cowardly POS moron!

Insane McCain with the meme-brain.

They died at the hands of the (fellow) Iranians. They died after a missile blitz by Iran on a foreign country. No crossfire. Thousands of non-Canucks have died at the hands of Iran and now when they kill your countrymen you blame someone else. The days of Canada being in the forefront of defending freedom are long gone from memory for this guy. Canada is fast becoming a “place” rather than a “nation”.

We will eventually need a wall on the Canadian border, they have let so many Muslims in that their culture will be destroyed, and they will have paid their conquers to overrun Canada. They even passed a law forbidding criticism of Muslims.

The legal battles of Mark Steyn are a good example of lawfare against free speech.

With voters like McCain, it’s no wonder Trudeau wins elections in Canada.

Something many deeply regret, and that regret is part of why trump won..

“McCain criticized the president’s abandonment of the Iran nuclear agreement and the recent U.S. killing of Iranian general Qasem Soleimani.”

B) – It baffles me that anyone would believe the Iran nuclear deal was designed to slow down or stop Iran’s nuclear program. No objective person could believe such a fairy tale. Truly delusional

If Trump is responsible for the Iranians shooting down an airliner, then Princess Leia was responsible (and not the Empire) for destroying the planet Alderaan. If she had been more forthcoming with information, the Death Star would have destroyed a different planet.

“The World’s First Carbon-Neutral Food Company” has a CEO who blames an American president for the stupidity and evil of Iran’s Mullarchy.

Yeah, nobody would have ever seen that coming.

Well said! And, what are the assumptions underlying a “carbon-neutral” calculation? What is the operational definition?

Their carbon neutral is probably “smoke” and mirrors.

Their cows are gluten-free. Or something.

OldProf2’s logic is, well logical.
And, if Ukraine International Airlines Flight 752 was shot down because Trump authorized the elimination of Qassem Solomeini because he, Trump, wanted to create a distraction from the impeachment, then it is ulimately the Democrats fault that Flight 752 was shot down because they are the ones who did the impeaching.

It all started on March 15 2885 BC in the city of Uruk when Bezelben’s donkey kicked over a pail of milk owned by Jusivisa The Milkmaid. Jusivisa was upset and punched Bezelben in the nose. Everything that has anything to do with the Middle East has happened as a result of that fateful punch. Blame the donkey.

Mohammad did something unmentionable which caused the donkey’s reaction.

Hoping to sell a bunch of their pork products.

Canada does not have any official diplomatic relationship with Iran and has warned their citizens against traveling there.

As to why anyone would fly to and from Iran is evidenced by the passenger list – family ties.

McCain claims a work colleague lost his wife and son in the Flight 752 attack.

Perhaps Mr. McCain, CEO of Maple Leaf Foods, Inc,. would be kind enough to explain why a work colleague’s wife and child was on a Ukrainian commercial airline taking off from Emam Khomeini International Airport in Tehran. Is this something Canadian citizens do often?

Iranian university student often pursue their advanced university degrees in Canada. So, yes, it is something Canadians, who were formerly Iranian, and who have family still in Iran, do.

I doubt any Iranain Canadian on the flight considered the risk in general of flying in and out of Iran as Canada is not even a mini-Satan and the flights to and from Canada were commonplace. With Canada being more cozy with such authoritarian regimes and dictatorships (Cuba and the like) it would be easy to forget trouble can form quickly. Flying out of a country actively launching missiles puts a lot of misfounded faith in Iran. “Harmless and Canadian” is not a talisman.

Iranian university student often pursue their advanced university degrees in Canada. So, yes, it is something Canadians, who were formerly Iranian, and who have family still in Iran, do.

Sorry, that doesn’t answer my question as to why a wife and small child of a employee of Maple Leaf Foods (a Canadian corporation) were on a Ukrainian commercial airline taking off from Emam Khomeini International Airport in Tehran for an unspecified destination in the Ukraine.

I was worried Maple Leaf Foods owned a bunch of different brands, but apparently not. It looks like all of their product bears the Maple Leaf name.

I believe they may own Swift Premium.

Don’t confuse this self-aggrandizing leftist with Maple Leaf Ducks. The latter are an American firm, a partial coop, that puts out excellent product and is based in Indiana.

Good catch. The logos look different enough there should be no confusion.

I was wondering about that. We purchase. cook, and eat 2 or 3 of their ducks a year. Don’t think I’ve ever seen anyone else’s ducks for sale.

What I like about ducks? It’s all dark meat.

Nah, probably not, that would have been a Trumps fault too!

Hmmm? I wonder who gave the order to fire the missile?
Trump Derangement Syndrome at its starkest.

It seems that a group of Canadian/Iranian dissidents were on that particular flight. I read earlier that 7 other flights took off from the Tehran airport, but for some reason, this one was hit. We’ve had Iranian dissidents killed, here in Houston, so the evilness of this regime wouldn’t surprise me.

The Iranian regime shot that plane down on purpose. I don’t know why, but they do not get the benefit of doubt.