Perhaps Newsom should confer with President Trump, whose policies have led to historic drug price decreases? 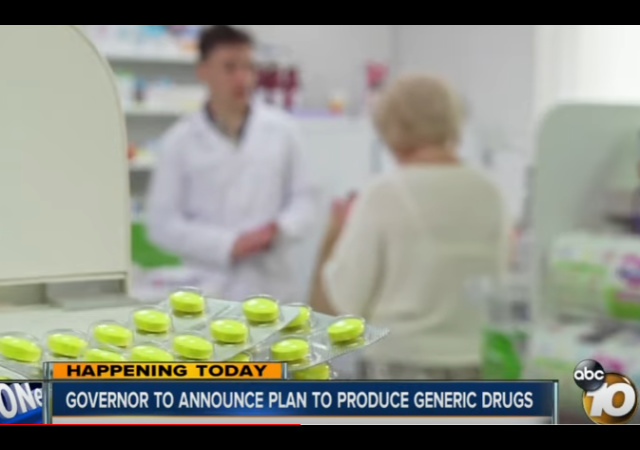 California might become the first state to offer its own brand of generic prescription drugs under a proposal announced Thursday by Gov. Gavin Newsom.

The Democratic governor wants the nation’s most populous state to contract with generic drug companies to make medications on its behalf so it could sell them to its nearly 40 million residents. The goal is to lower prices by increasing competition in the generic drug market, Newsom said.

…Newsom’s proposal would create a single market for drug pricing in California, with companies having to bid to sell their medicine at a uniform price. One expert said that piece would have the bigger impact.

“Other countries control or negotiate the price of drugs, and if there is one state that could do it, it’s California, which is the size of a country,” said Larry Levitt, executive vice president of health policy for the Kaiser Family Foundation. “A drug company could walk away from Rhode Island. It’s much harder to walk away from California.”

And while escalating drug prices are a reasonable concern, the motivation behind Newsom’s proposal is troubling: He blames the costs on “greed.”

SACRAMENTO, Calif. — California could become the first state to make its own prescription drugs under a proposal announced Thursday by Gov. Gavin Newsom, who says it would “take the power out of the hands of greedy pharmaceutical companies.” https://t.co/gIXRzfeTxs

Any serious proposal that addresses drug prices must account for the enormous expenditures associated with research and development. Furthermore, due consideration must be given to the funding to address the burdensome regulations associated with pharmaceutical testing and the final blessing by the Food and Drug Administration.

“Frankly, I think it’s a ludicrous proposal that demonstrates a profound misunderstanding of generic drug economics,” said Adam Fein, chief executive of the Drug Channels Institute, a market research and consulting firm. “It’s like saying you want to go to Post [Consumer Brands] for your Fruity Pebbles and open a supermarket to buy them. It doesn’t make sense.”

Health experts said California’s plan has the potential to assist consumers if done correctly but cautioned that the state should not expect it to yield significant savings. Those experts said the state could identify drugs that have not generated sufficient competition among generic drug manufacturers and try to compete, but that would mean producing medicines that are in less demand.

I would also like to point out that California’s attempt to reap profits from the legalized marijuana industry has been a spectacular failure, due to over-regulation and over-taxation. If there was any cost reduction possible, I sense that the state’s bureaucrats would find a way to raise the costs and limit the access anyway.

Interestingly, President Donald Trump has implemented policies that have reduced the costs associated with prescription medicines. Back in 2018, Trump’s FDA approved 781 generic drugs. Now, prescription drug prices are decreasing at rates not seen since the 1960s. 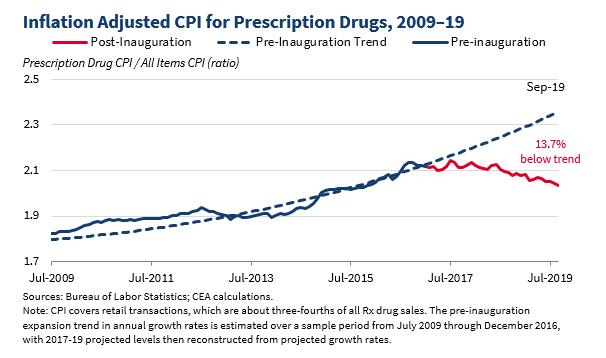 I would suggest that if Newsom wants to have at least one of his policies succeed, he confer with the President instead of continuing his #TrumpDerangementSyndrome-inspired #Resistance.

More details on the proposal here:

Dumb move, CA. Get your drugs from Mexico. I mean, you get everything else from Mexico …. like illegal invaders, for example.

They can’t even sell pot and make money, so the only way they’re going to be able to sell generics for less than retail is to violate drug company patents and use some fly-by-night company across the border. And they’ll need some sort of legal indemnity in California law because the first person who gets a rash from CalMed/PillMill’s Authentic Genuine Artkile drug XYZ will sue the state for billions, and so will another few hundreds of thousands behind him.

notamemberofanyorganizedpolicital in reply to georgfelis. | January 16, 2020 at 4:31 pm

But the more Money Pots the DEMS can stick their hands into….

Addressing progressive prices starting with prescription drugs is a positive step to Make America Great Again h/t Trump. Restoring the market to organically, optimally deflate the multi-decadal bubbles forced by single/central solutions is the next step. Baby steps, I suppose.

Somehow, we have to get other OECD countries to carry their part of the cost of drug development. Right now, they are strong-arming pharmaceutical companies to lower prices below the cost of development, leaving US patients picking up the check. Gee, that sounds familiar doesn’t…*cough*…*nato*…*cough*…it.

That probably used to be true, but in our age of global supply it’s just not always true. Drugs can be (and are) sourced from countries with poor or corrupt regulatory oversight, and FDA inspectors (when FDA has the resources to fund them) are sometimes shown Potemkin factories backed up with doctored quality data. And even if a drug factory is well run it remains vulverable to suppliers who supply its ingredients.

Is California going to do its own quality control and oversight as well, or just go with the lowest bidder? And if California is buying and reselling these drugs, wouldn’t it incur some legal liability if are deficient?

That’s all just the hysterical nonsense bought and paid for by the big pharmaceutical companies determined to keep their monopoly and obscene profits for drugs that cost them virtually nothing to produce and scare consumers away from the generic market.

And if you truly believe that any “active pharmaceutical chemical” you find in name brand drugs is produced anywhere other than China you’re deluding yourself. It’s all made in foreign countries. Lock, stock and barrel.

Generic drugs are in the vast majority a viable and less expensive alternative to the hugely overpriced “brand name” drugs that the monopolistic pharmaceutical companies try and push on the public.

Why does the state have to get in the drug production business?
Oh, right – that’s how socialists roll. I can’t imagine any inefficiency or bloat or corruption could ever happen.

Perfectly good idea. When they get the drug market fixed they can move on to cars, and then appliances, and after perhaps housing.

A regular utopia. What could possibly go wrong?

California’s senior Senator has great connections in China. No doubt the State will be immune from liability for the drugs it sells, so California should be able to get really low prices from the suppliers.

Slowly creating the Nation of Alta California. Border control will be necessary for Arizona and Nevada soon. Expect California to build their own wall to keep residents IN the state.

Lawyers get ready for the deep pockets of government run businesses.

California, where they can’t even keep the shit off the streets, wants to go into the drug making business? I’d be afraid they would recycle all those used hypodermics. We won’t even eat produce from California these days.

SHHHH! Don’t tell them. Let them do whatever they are going to do to screw themselves without any interference. THE KEY THING IS THAT SINCE WE DID NOT DO ANYTHING TO GET THEM INTO THE MESS THEY WILL BE IN, WE HAVE ABSOLUTELY NO OBLIGATION TO HELP THE CITIZENS OF THE PEOPLES’ REPUBLIC OF ALTA CALIFORNIA OUT OF IT.

Drug prices will dip, innovation will dip, then prices will surge (the drugs will be taxed). Diseases will become rampant and less curable because of zero innovation and avoidance of the california pharm market.

Democrat politicians will get kickbacks, of course.

Only a corrupt lunatic like newsom would propose this.

Probably big a big tax increase in CalifornicAid a year after screwing up with the drug pricing. And the voters will agree with the “common sense” approach to taxing the last remaining middle class workers.